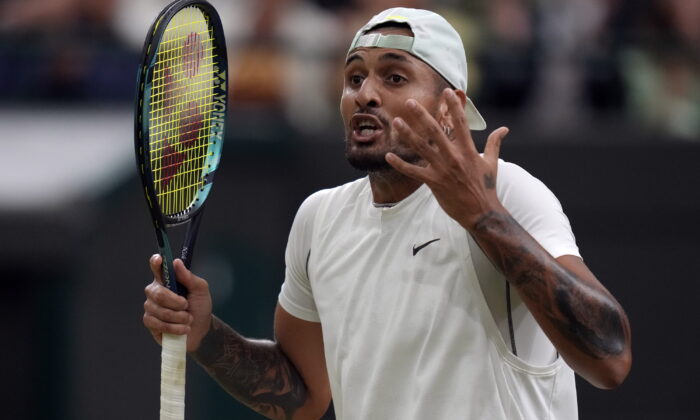 WIMBLEDON, England—Nick Kyrgios cursed at the Wimbledon chair umpire and asked, “Are you dumb?” He demanded to see a Grand Slam supervisor after questioning why his opponent, Stefanos Tsitsipas, didn’t forfeit their ever-contentious, never-boring match for angrily hitting a ball into the stands after dropping the second set.

Unsatisfied with the response, Kyrgios asked, “What are you talking about, bro?” Then came this: “Bro, bring out more supervisors. I’m not done. Bring ’em all out. I don’t care. I’m not playing until we get to the bottom of this.”

“It’s constant bullying. That’s what he does. He bullies the opponents,” said Tsitsipas, the 2021 French Open runner-up, who also lost to Kyrgios on grass at a tournament in Halle, Germany, last month. “He was probably a bully at school himself. I don’t like bullies.”

There was more, so much more, from underarm serves hit by the Kyrgios—including one between his legs—to the three shots purposely smacked right at him by Tsitsipas. A total of three code violations were called by chair umpire Damien Dumusois, one on Kyrgios for an audible obscenity, and two on Tsitsipas for ball abuse, earning a point penalty.

“He was the one hitting balls at me. He was the one who hit a spectator. … I didn’t do anything. Apart from me going back and forth with the umpire, I did nothing toward Stefanos today that was disrespectful, I don’t think,” Kyrgios said at his news conference, wearing a T-shirt with former NBA player Dennis Rodman’s name on it.

“If he’s affected by that today, then that’s what’s holding him back,” Kyrgios said about Tsitsipas. “Because someone can just do that, and that’s going to throw him off his game like that? I just think it’s soft.”

There even was some terrific tennis along the way, with the players combining for 118 winners. It all took 3 hours, 17 minutes, with nary a dull moment, and finished so late that the retractable roof at No. 1 Court was shut and the artificial lights turned on midway through the fourth set.

Tsitsipas held a pair of set points to force a fifth, but Kyrgios saved both, the latter with a half-volley winner after serving-and-volleying on a second serve.

Kyrgios, a 27-year-old from Australia, converted his second match point with a drop shot, then roared. That sort of skill has always been evident from Kyrgios, who twice has been a Grand Slam quarterfinalist. Also long obvious: Kyrgios often appears more interested in entertaining or arguing than in doing whatever it takes to finish on the right side of the score.

He was fined $10,000 by the tournament for unsportsmanlike conduct at his first-round match, which he ended by spitting the direction of a spectator he said was heckling him. It is the largest of the 22 prize money penalties issued in Week 1.

Kyrgios has a history of crossing the line during matches. In 2019, he was placed on a six-month probation by the ATP Tour after being fined $113,000 for eight infractions at a tournament. Earlier that season, he was defaulted from a match at the Italian Open after throwing a chair. In 2016, he was suspended by the ATP for not trying to win and for insulting fans during the Shanghai Masters.

His issues with Dumusois began in the first set, when he was disturbed by a reversed call by a line judge and wanted that official removed. Didn’t happen.

“There comes a point where you really get tired of it, let’s say,” said Tsitsipas, a 23-year-old from Greece. “The constant talking, the constant complaining.”

After Kyrgios broke to grab the second set, Tsitsipas swatted a ball with a backhand into the crowd. The ball appeared to ricochet off a wall, but what wasn’t entirely clear was whether it landed on anyone.

Tsitsipas apologized for that afterward, saying it stemmed from frustration created by “all the circus show going on, on the other side of the net.”

“I didn’t hit any people. It did hit the wall, thank God,” he said, and acknowledged he was trying to hit his foe with some other balls aimed right at his body. “For sure I’m never doing that again. It’s my responsibility, for sure.”

That drew just a warning from Dumusois, which didn’t sit well with Kyrgios.

“You can’t hit a ball into the crowd and hit someone and not get defaulted,” Kyrgios said, bringing up the episode at the 2020 U.S. Open involving Novak Djokovic, who was ejected from a match after inadvertently hitting a ball that struck a line judge in the throat.

At one point, Kyrgios told Dumusois: “You don’t know how to play, so how about you don’t tell me how to play? … Bro, the people want to see me, not you.”

They will get another chance to see Kyrgios on Monday, when he faces Brandon Nakashima for a spot in the quarterfinals. Nakashima is one of four American men in the fourth round, the most at Wimbledon since 1999.

The other men’s matches Monday will be 22-time major champion Rafael Nadal against No. 21 Botic van de Zandschulp, No. 11 Taylor Fritz against qualifier Jason Kubler, and No. 19 Alex de Minaur against Cristian Garin.

Nadal’s 6–1, 6–2, 6–4 victory over No. 27 Lorenzo Sonego was nowhere near as off-the-rails as Kyrgios vs. Tsitsipas, but it had its own bit of back-and-forth between the players over etiquette.

Unlike Kyrgios and Tsitsipas, though, they settled their differences in the locker room afterward.

“I have to say,” Nadal said at his news conference, “that I was wrong.”