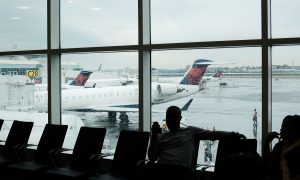 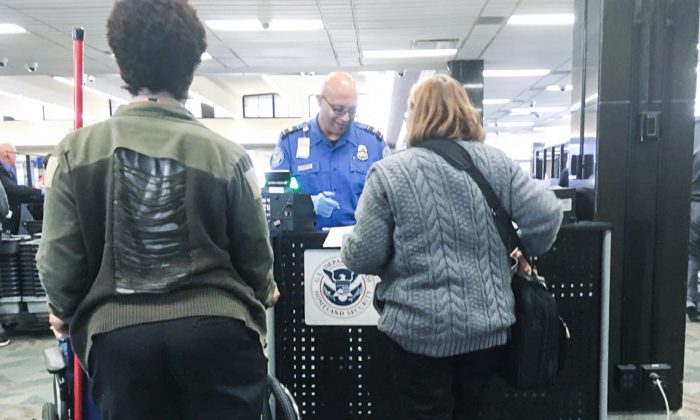 While a number of media outlets have been raising alarm with reports of chaos at airports amid a partial government shutdown, the Transportation Security Administration (TSA) said there has been no impact on airport security and average wait times, and only a slight uptick in call-out sick rates compared to a year ago.

An agency spokesperson said in an emailed statement to The Epoch Times that TSA data shows approximately a 1 percentage point increase in officers calling in sick while they are not getting paid.

“This statistic does not comport with the unofficial and anecdotal narrative others have been providing to media outlets,” the spokesperson said. “To be clear, there has not been a significant increase in call-out rates to date.”

“TSA continues to manage the security it provides at checkpoints across the country. There has been no degradation in security effectiveness and average wait times are well within TSA standards.”

Michael Bilello, TSA’s assistant administrator for public affairs, wrote on Twitter on Jan. 8 that the rate of officers calling in sick increased from 3.8 percent on Jan. 7 last year to 4.6 percent the same time this year.

“To date, ‘call-outs’ nationwide are having minimal impact,” Bilello said. “Security standards will NOT be compromised.”

Meanwhile, a union representing more than 44,000 TSA Officers said in a press release on Jan. 8 that some of their members have resigned or are thinking about resigning due to “extreme financial hardships” because of the government shutdown.

“Every day I’m getting calls from my members about their extreme financial hardships and need for a paycheck,” American Federation of Government Employees TSA Council President Hydrick Thomas said.

Thomas warns that the situation would “create a massive security risk for American travelers since we don’t have enough trainees in the pipeline or the ability to process new hires.” He added that “if this keeps up there are problems that will arise—least of which would be increased wait times for travelers.”

TSA did not agree. In a series of posts on Jan. 8 and 9, Bilello wrote on Twitter about how short wait times have been in major airports around the country.

He also responded to media reports about an uptick of officers resigning, saying that they were “not accurate.”

“TSA’s data for today does not indicate a “spike” in resignations from its officers,” Bilello said, referring to the language used in the reporting.

TSA’s data for today does not indicate a “spike” in resignations from its officers. This is not accurate.

The TSA said that they acknowledge the stress that the partial government shutdown places on officers and their families and are extremely grateful for their commitment.

“As the current lapse in funding continues, TSA wants to echo the positive sentiments of industry and the traveling public who have recognized the dedication of the more than 51,000 officers across the country who remain focused on the mission,” the emailed statement said.

“Transportation Security Officers are among the most mission-oriented and dedicated people in government.”

The government shutdown has entered its third week since it began at midnight on Dec. 21, after Democrats in Congress blocked a request for $5.6 billion to construct a wall on the southwest border. A team led by Vice President Mike Pence spent the weekend of Jan. 5 negotiating with the Democrats, but no agreement was reached.