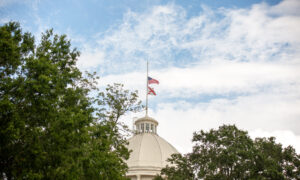 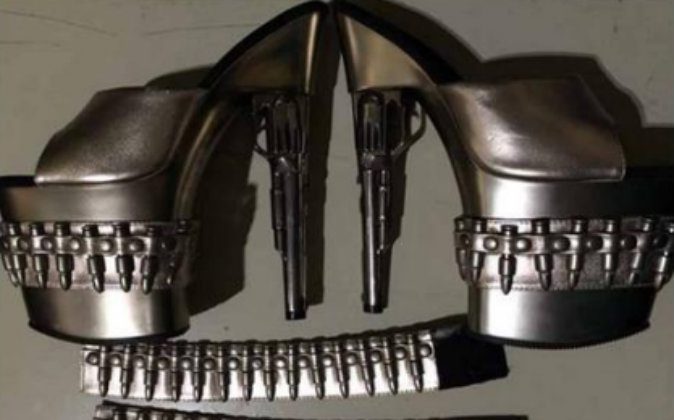 Gun-shaped heels and bullet bracelets made by the California-based company Pleaser USA, Inc., which calls itself the "leader in sexy and alternative footwear." (TSA)
US

Security officers at a D.C.-area airport stopped a woman carrying high heels shaped like guns over the weekend.

The woman, who has not been identified, had the pair of gun-themed shoes in one of her carry-on bags, along with bullet bracelets.

Transportation Security Administration officers at Baltimore-Washington International told the woman she would have to put the shoes and bracelets into a checked bag, which she tried to do, but ran out of time, so she chose to leave the items behind at the security checkpoint.

We do not permit replica guns or ammunition past checkpoints.
— Lisa Farbstein, Transportation Security Administration

“We do not permit replica guns or ammunition past checkpoints,” TSA spokesperson Lisa Farbstein told CNN. “She was advised that she could put them in a checked bag.”

The 7.5-inch plastic heels are made by the California-based company Pleaser USA, Inc., which calls itself the “leader in sexy and alternative footwear.”

The wholesaler’s spokeswoman told NBC Washington that the gun-shaped shoes are a top seller, and celebrities such as Lady Gaga and Taylor Momsen have sported them.

“This is definitely the first time we’ve heard of a problem with our shoes,” the company spokeswoman said. She said the company will start putting notices in boxes of the shoes advising buyers to use caution when wearing or carrying them.