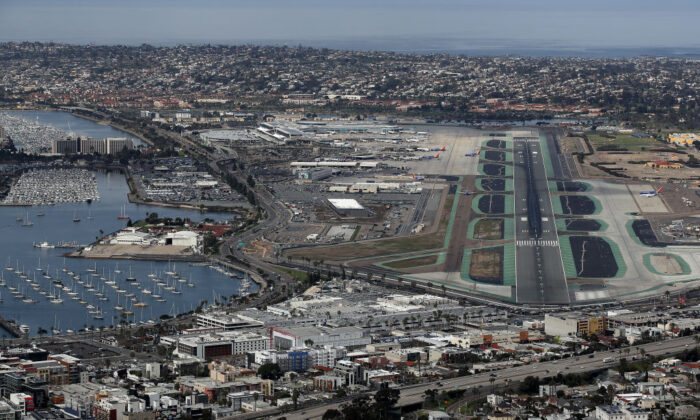 SAN DIEGO—A security breach involving an unscreened piece of luggage prompted an evacuation of San Diego International Airport Terminal 2 Thursday along with a several-hour grounding of its flights.

Authorities cleared the public out of the travel hub at the bayside airport at about 12:30 p.m., after a man entered the post-screening area of the airport with a carry-on bag that had been identified for an additional check, according to the Transportation Security Administration (TSA).

“TSA officers began searching for the traveler and were not able to locate him,” the agency reported in a prepared statement. As a result, TSA officials said they cleared Terminal 2.

The Federal Aviation Administration (FAA), meanwhile, ordered a “ground stop” that suspended departures out of the terminal.

The TSA directed all passengers in the post-security areas of Terminal 2—including those who already had boarded planes—to be sent back for re-screening.

Officers then carried out a sweep of the terminal and its gate areas, aided by contraband-detecting service dogs.

TSA personnel began re-screening airline customers shortly after 2:30 p.m., the agency advised, urging “all travelers to exercise patience while this incident is resolved.”

At 3 p.m., the FAA lifted the ground stop, clearing the way for a resumption of flights out of the terminal, according to airport officials.

The passenger re-screenings were continuing as of mid-afternoon. TSA officials estimated that 5,000 to 7,000 travelers would have to go through security checks a second time due to the incident.

The agency would not provide further specifics about the security breach.