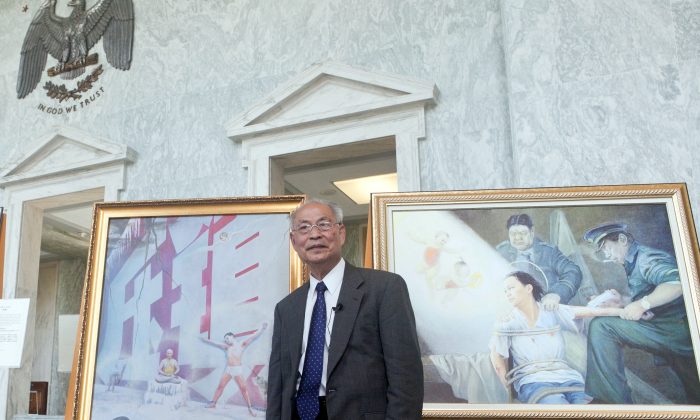 Professor Kunlun Zhang with his painting “Red Wall,” which is based on his experience as a prisoner of conscience in China. Zhang, a sculptor, believes art is the best way to communicate the beauty of his spiritual discipline Falun Gong, and the brutality of the persecution in China. (XIMING/EPOCH TIMES)
China

WASHINGTON—Truthfulness, compassion, and tolerance are not the first things that spring to mind walking the halls of Congress and for a young leaders group visiting Capitol Hill Thursday it was a pleasant surprise to see the Zhen Shan Ren art exhibition on display in the Rayburn building.

The collection of paintings depicts the beauty of the Chinese spiritual discipline Falun Gong, also known as Falun Dafa, as well as the hardship of living a spiritual life in China today.

Gilliam, whose focus is on economics and Asian studies, welcomed the exhibition’s focus on human rights in China. “It is not something that is talked about in Congress,” he said.

Many of the artists have been detained and brutally tortured for their adherence to Falun Gong, a peaceful form of qigong that has been the focus of severe persecution by the Chinese regime.

Mary Eveleigh, 20, a resident of D.C., said she could feel the sorrow of the people in the paintings but the beauty and color of the works themselves impressed her.

Gilliam noted the “clarity and poignancy” of the artwork. “Everything is very direct—there is no beating around the bush,” he said.

His comments would have pleased professor Kunlun Zhang, the general coordinator of the Art of Zhen Shan Ren International Exhibition and also one of the artists.

“I want to show people how beautiful Dafa cultivation is and how brutally the CCP [Chinese Communist Party] treats Falun Dafa, through the paintings,” Zhang said at the exhibition.

Zhang graduated from the China Academy of Art with a focus in sculpture and went on to found the sculpture department at Shandong University of Arts. He was executive director of the Sculpture Research Institute in 2000 when he was suddenly arrested for distributing information about Falun Gong.

During questioning the police attacked Zhang with electric batons, they wanted the names of other people who practiced qigong with him.

Zhang overheard the police chief telling the another police officer that then-leader Jiang Zemin had issued a strong directive to destroy Falun Gong and that police could do whatever they wanted, it wouldn’t matter. The beatings by police became even more brutal.

After three nights at the police station and without having given away any names, Zhang was moved first to a detention center and then to a brainwashing center where he promptly went on a hunger strike.

“I knew I did not want to stay there,” he said, speaking through a translator.

Zhang was lucky. He was able to reason with one of the three principals running the center convincing him that Falun Gong was a good practice and that the principal was participating in “the worst thing,” the persecution of innocent people.

A week later Zhang was released but he knew it would not be long before he was arrested again. He was sentenced to three years prison but through the effort of friends, family, and the Canadian government he was released and escaped to north America.

Zhang believes art is the best way to tell people about Falun Gong, particularly lawmakers. “If they really understand they will stand by Falun Gong,” he said through a translator.