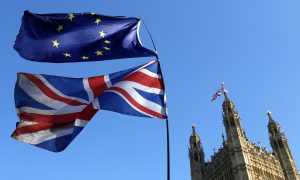 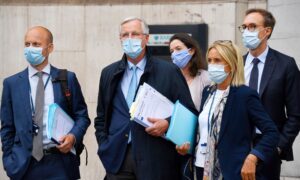 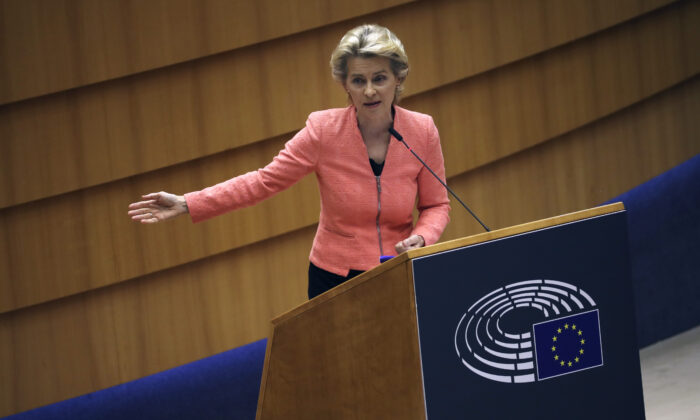 European Commission President Ursula von der Leyen addresses the plenary during her first State of the Union speech at the European Parliament in Brussels, on Sept. 16, 2020. (Francisco Seco/AP Photo)
Europe

‘Trust Is the Foundation of Any Strong Partnership,’ EU Commission Chief Says

Insisting that chances for a future trade deal are slipping away by the day, von der Leyen told the European Union’s legislature that plans by British Prime Minister Boris Johnson to renege on parts of the withdrawal agreement signed by both of them dimmed those hopes even further.

What’s more, she insisted that Britain is throwing its good name to the wind by not respecting a deal it signed and approved last December.

“It cannot be unilaterally changed, disregarded or disciplined. This is a matter of law and trust and good faith,” she said in her State of the Union address.

She emphasized it by quoting from a 1975 speech by British Conservative icon Margaret Thatcher.

“Britain does not break treaties. It would be bad for Britain, bad for our relations with the rest of the world and bad for any future treaty on trade,” von der Leyen said, quoting Thatcher.

“Trust is the foundation of any strong partnership,” she concluded.

Johnson has said the new legislation—known as the Internal Market bill—is needed to clarify the Northern Ireland protocol, and to protect free trade between mainland Britain and Northern Ireland. But the government says that requires overriding part of the withdrawal treaty it signed with Brussels.

Writing in The Telegraph on Saturday, Johnson accused the EU of threatening to “use an extreme interpretation of the Northern Ireland protocol to impose a full-scale trade border down the Irish Sea.” Such steps, he said, would threaten the unity of the United Kingdom.

EU chief negotiator Michel Barnier rejected that charge. He said on Sunday that the Northern Ireland protocol “is not a threat to the integrity of the UK,” and had been agreed by the two sides to protect peace on the island of Ireland.

The  controversial Internal Market bill has passed the first reading, with 340 MPs voting for it and 263 voting against. It’s now being debated in Parliament, where Johnson faces opposition from some members of his governing Conservative Party.

Justice Secretary Robert Buckland said the government sees a “way through” the parliamentary maze, and Johnson has been talking to the party rebels.

Buckland said there had been talks with Bob Neill, a Conservative lawmaker who has proposed amending the bill to ensure that any attempt to use the clauses that breach the Brexit divorce agreement receive prior approval from Parliament.

The BBC reported on Wednesday that Johnson’s government has reached a deal to avert a rebellion.

“I understand a deal has been reached btw [between] Tories who wanted to vote for Bob [Neill]’s amendment to the controversial UKIM bill and the govt – it gives an extra layer of parliamentary oversight – ministers hope prevents rebellion next week,” BBC Political Editor Laura Kuenssberg said on Twitter.

Britain’s Northern Ireland Minister Brandon Lewis told Parliament he stood by remarks he made last week that the bill would “break international law in a very specific and limited way.”

He said he was optimistic about an eventual trade deal with the EU, however.

Britain’s Foreign Secretary Dominic Raab is set to meet on Wednesday with Nancy Pelosi, the speaker of U.S. House of Representatives, to discuss the impact of Brexit to Northern Ireland.

Pelosi has warned there will not be a U.S.–UK trade deal if the Good Friday agreement is jeopardized.

Reuters, The Associated Press, and Alexander Zhang contributed to this report.