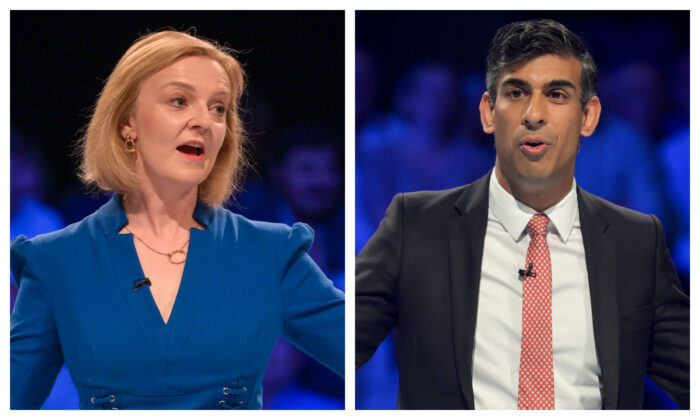 The two candidates vying to become the UK’s next prime minister continued to clash on economic policies on Saturday.

It comes after energy consultancy Auxilione released a forecast on Saturday saying the price cap on a typical annual energy bill could hit around £4,700 ($5,670) by April 2023. The forecast is almost four times the amount in April this year of £1,277 ($1,540).

The soaring energy bills are accompanied by mounting inflation that is set to peak at more than 13 percent later this year, according to a forecast by the Bank of England, which also predicted a five-quarter economic decline, the longest recession since 2008.

Writing in The Sunday Telegraph, Truss said she will “hit the ground running by bringing in an emergency budget” if she becomes the prime minister, tackling the rising cost of living by “cutting taxes, reversing the rise on National Insurance, and suspending the green levy on energy bills.”

She blamed the prospect of a recession on a “tired economic orthodoxy” as well as the COVID-19 pandemic and Russia’s invasion of Ukraine, but refused to accept the “inevitability of a recession,” vowing to stimulate growth by scrapping EU-derived red tape by the end of 2023 and creating “create new low-tax and low-regulation investment zones.”

She also said the inflation was “exacerbated by monetary policy,” and that she will seek to review the Bank of England’s mandate.

In an interview with the Financial Times, Truss said one of the issues she wants to look at regarding the central bank is “the control of the money supply and particularly the quantitative easing policy and the impact that’s had.”

She also told the publication that the way to help with the rising energy bills is “a Conservative way of lowering the tax burden, not giving out handouts.”

Sunak said it’s “simply wrong” for Truss to “rule out further direct support,” arguing Truss’s tax cuts will not “help very significantly people like pensioners or those on low incomes.”

He also said he would “go further” than the support of up to £1,200 for people he announced as chancellor if he becomes prime minister once there is “certainty about exactly what bills are going to be in the autumn.”

“I will look at doing more and particularly for families like pensioners for example where I said that this winter they can get an extra payment worth up to £300.”

Sunak, who argues that an immediate tax cut would stoke inflation, labeled Truss’s plan “starry-eyed boosterism” as opposed to his “clear-eyed realism.”

He told The Sunday Times that his priority is to “not do things that make it worse,” arguing Truss’s plan of “putting £40 billion-plus and borrowed money into an economy that’s seeing an inflation spiral does risk making it worse.”

“It might be okay but I think it means taking a gamble with people’s savings, their pensions, their mortgage rates, it’s not a gamble I’m prepared to take so I don’t want to make it worse,” he said.

Former Conservative Party co-chairman Oliver Dowden, who is backing Sunak, argued Truss’s plan to reverse Sunak’s increase of national insurance contributions is insufficient in tackling household bills, telling the BBC that it’s “only going to benefit someone working full time on the national living wage by less than £60.”

“It makes no sense to take money off of people and then to give it back in very, very complicated ways. We need to simplify this and we need to ensure that households are as resilient as possible and stopping taking large sums of tax on people is one way of doing that,” she told Sky News.