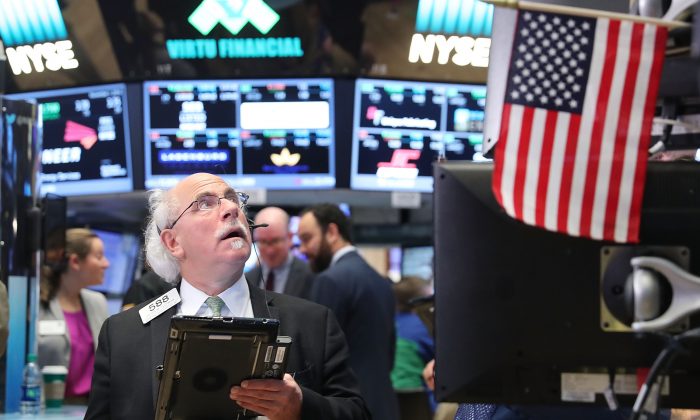 U.S. stock markets keep hitting new highs three weeks after Trump’s election. Before the results came in, many predicted a Trump victory would be “America’s Brexit,” leading to a huge sell-off in stocks. It has now become clear, however, that investors are moving from emerging markets to the United States.

“Equity investors are taking Trump at face value. He is a pro-growth, tax cutting, deficit spending president who wants to re-invest in America,” Andrew Orchard, global equity sales director at Citigroup, explained in a video.

The post-election rally drove all four major U.S. stock market indices to record highs, with the Dow Jones Industrial Average surpassing 19,000 for the first time ever.

Markets are pricing in a fiscal stimulus and reflation in the United States, according to experts.

“Overall, the market appears to be taking a relatively optimistic view of the economic impact of new U.S. policies: a hefty fiscal stimulus is priced in and there seems to be an assumption that any protectionist policies will not hit world growth much,” Adam Slater, lead economist at Oxford Economics, stated in a report.

“Both these assumptions could be tested in the months ahead as actual policies take shape,” he wrote.

At the beginning of this year, investors moved into emerging market bonds to seek higher returns, since U.S. Treasury yields were near all-time lows, and Japanese, German, and Swiss bonds were offering negative yields. This move supported emerging market currencies and stocks as well.

Following the elections, however, investors started to pull out of emerging markets and moved into U.S. equities, with the hope that Trump’s policies will deliver domestic growth through infrastructure spending and tax cuts.

Financial stocks, particularly Goldman Sachs and J.P. Morgan, are among the market’s biggest winners. Both benefited from the expectations of higher growth and looser regulation, according to Slater.

Industrial commodities surged as well, with copper and iron ore both rising more than 10 percent. This is considered a sign of optimism about the economic cycle.

“We are of the mindset that ‘a rising tide lifts all boats,’ so a fiscal policy initiative in the world’s largest demand economy should be constructive for commodities more broadly,” Citigroup analysts stated in a report.

Since July, Treasury bond yields have been rising with expectations of high inflation and a possible Federal Reserve rate hike. Just since the elections, 10-year Treasury yields increased around 50 basis points.

With increasing bond yields, U.S. equities may not be able to move much higher because their valuations become more expensive with a higher interest rate. However, Citigroup analysts believe there are some sectors that will continue to attract investors.

“We do believe some sectors are looking undervalued. That is not just the case in the United States, it is also the case in Europe. One sector we are focusing on at the moment is financials,” Orchard said.

“Protectionist concerns do appear to be significant at least with respect to Mexican assets, with the peso slumping by around 10 percent since the election—by far the biggest decline among the emerging market currencies,” wrote Slater.

According to him, a strong rise in dollar interest rates and protectionist concerns may lead to a renewed outflow of capital from emerging markets.

A strong dollar environment is expected to benefit the exporting sectors of both the Japanese and European economies, contributing to corporate earnings overseas, according to analysts.

The Trump administration is considered business-friendly, which could also be a boon for U.S corporations. Due to tax reasons, U.S. companies hold over $2.5 trillion in cash overseas.

“A one-time repatriation of funds at a low tax rate can be distributed to shareholders or reinvested through capital spending,” the Citigroup analysts wrote. Broader corporate tax reform would be positive for U.S. companies and hence stock markets.

Finally, consumer confidence rose sharply in November as many Americans expressed greater optimism after the elections.

“In particular, we are excited about the potential for deficit-funded fiscal stimulus with a focus on infrastructure spending. This has been discussed ad nauseam since the Great Financial Crisis but it may finally be coming to fruition, as a single party controls the presidency and Congress,” the Citigroup analysts stated.