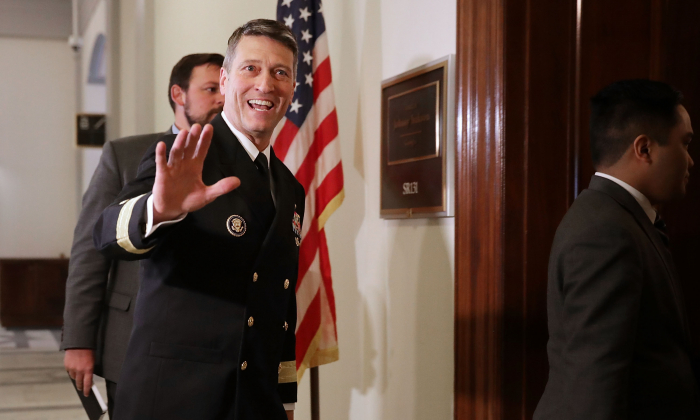 WASHINGTON—President Donald Trump’s physician Ronny Jackson withdrew on Thursday from consideration to head the Department of Veterans Affairs after allegations about misconduct mounted and a Senate panel postponed his confirmation hearing.

“While I will forever be grateful for the trust and confidence President Trump has placed in me by giving me this opportunity, I am regretfully withdrawing my nomination to be Secretary for the Department of Veterans Affairs,” Jackson said in a statement.

The Senate Committee on Veterans’ Affairs was investigating allegations that Jackson, a U.S. Navy rear admiral who has been the physician to three presidents, had overseen a hostile work environment as White House physician.

Trump lashed out angrily at Democrats for Jackson’s withdrawal in a phone interview with Fox News, calling them obstructionists who were politicizing his nominees. He singled out Senator Jon Tester, the top-ranking Democrat on the Senate Veterans’ Affairs committee, who gave a series of interviews about the allegations against Jackson.

“He would have done a great job,” Trump said of Jackson. “These are all false accusations. They’re trying to destroy a man.”

Trump said he has a new candidate with “political capabilities” for the job.

Details about the allegations against Trump’s nominee to lead the federal government’s second-largest agency were compiled in a document by Democratic committee staff that surfaced on Wednesday.

“The allegations against me are completely false and fabricated,” Jackson said. “Unfortunately, because of how Washington works, these false allegations have become a distraction for this President and the important issue we must be addressing—how we give the best care to our nation’s heroes.”

Jackson, 50, has worked as a presidential physician since the George W. Bush administration and has been the lead doctor for Trump as well as former President Barack Obama. He is well-liked by both Republican and Democratic administration officials.

White House spokeswoman Sarah Sanders said Jackson was on the job at the White House on Thursday but it was not immediately clear whether he would resume his post as the top White House physician.

The Iraq war veteran took on a higher profile when he gave a long and glowing account of Trump’s health at a news conference in January after his first presidential medical exam, saying Trump had “incredibly good genes.”

The department has long been under fire for the quality of healthcare it provides veterans. During his election campaign, Trump vowed to clean it up.

The Senate committee considering his nomination asked the White House this week for more information after initial allegations about Jackson’s conduct came to light.

Trump on Tuesday said during a news conference that he did not know the details of the allegations against Jackson but said it was up to him whether to continue with a political process he called “too ugly and too disgusting.”