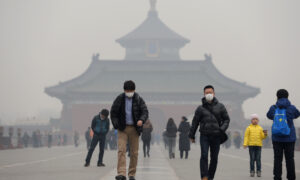 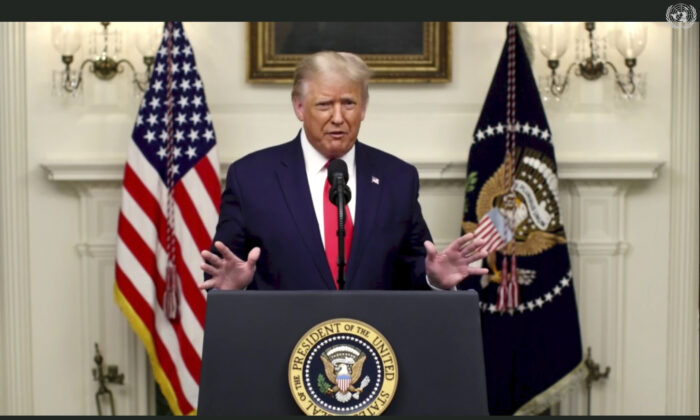 President Donald Trump speaks in a pre-recorded message which was played during the 75th session of the United Nations General Assembly, at the United Nations headquarters in New York City on Sept. 22, 2020. (UNTV via AP)
US News

In his address to the United Nations on September 22, U.S. President Donald Trump contrasted the United States’ environmental record with that of the world’s largest polluter, China.

“Every year, China dumps millions and millions of tons of plastic and trash into the oceans, overfishes other countries’ waters, destroys vast swaths of coral reef, and emits more toxic mercury into the atmosphere than any country anywhere in the world,” Trump said.

The President also told the United Nations General Assembly that the world “must hold China accountable for their actions” that led to the global CCP (Chinese Communist Party) virus pandemic.

Today, President @realDonaldTrump addressed the United Nations General Assembly by video, where he explained how America is leading the global fight against Coronavirus—and urged the world to hold China’s government accountable for its spread.

In the pre-recorded address, the president also reminded the UN General Assembly that China’s carbon emissions are nearly twice that of the United States, and rising fast. The United Nations states that carbon emissions from the use of fossil fuels are the driving force behind climate conditions the UN says is changing. According to the United Nations, “Human-induced climate change is affecting life-sustaining systems, from the top of the mountains to the depths of the oceans.”

Despite real GDP growth of 2.3 percent in 2019 and 2.9 percent in 2018, however, the United States still managed to cut carbon emissions. Trump told the UN General Assembly that “After I withdrew from the one-sided Paris Climate Accord, last year America reduced its carbon emissions by more than any country in the agreement.”

According to the UK’s Carbon Brief website, the Paris agreement is based on signatory nations making “intended nationally determined contribution” (INDCs)—which are essentially pledges or statements of intent to reduce greenhouse gas emissions. Under its INDC, China pledged to continue to increase carbon dioxide emissions until 2030, with “best efforts” to peak earlier.

Before Trump announced America’s withdrawal from the accord, however, the United States had pledged to slash between 26 and 28 percent of its 2005-level carbon dioxide emissions by 2025.

In a 2017 statement announcing the withdrawal, the President said that he believed the “draconian financial and economic burdens” of the Paris Accord would have cost the U.S. economy as much as $3 trillion in GDP and 6.5 million industrial jobs by 2040. Trump said the Accord would have signified “a massive redistribution of United States wealth to other countries.”

In Monday’s address to the UN, the president also spoke of certain commentators who he said sought to criticize the United States’ environmental efforts while paying less attention to Chinese pollution.

“Those who attack America’s exceptional environmental record while ignoring China’s rampant pollution are not interested in the environment,” Trump told the UN. “They only want to punish America, and I will not stand for it.”

President Trump’s comments on the United States’ environmental performance were supported by statements from the U.S. Environmental Protection Agency (EPA) this week, with the Agency and Administrator Andrew Wheeler recounting a number of key areas of progress.

“The U.S. has seen a 12 percent reduction in energy-related carbon dioxide emissions since 2005,” the agency wrote on Twitter Monday. “We’ve also cut our greenhouse gas emissions more than Britain, France, Germany, Italy, and Canada combined. China, meanwhile, has increased their emissions by over 50 percent since 2005.”

The EPA noted separately on Twitter that over the last 50 years, air pollution in the United States has decreased by 77 percent, including a 7 percent reduction since 2016.

In a speech to the American Enterprise Institute on Monday, Administrator Wheeler addressed members of the media directly. “I would say to the Press: Don’t follow a shiny object like climate when more seemingly mundane actions like Superfund clean-ups and Brownfields projects have the ability to benefit far more lives in this country, if proper attention and credit is given to them.”

China is not committed to reducing its carbon footprint until 2030 under the Paris Climate Accord, they are the worst environmental polluters in the world and the media buys into this.

“Our environment in the United States, taken as a whole, is much cleaner than other great powers, and cleaner than most of the rich industrialized economies around the world,” Wheeler said.