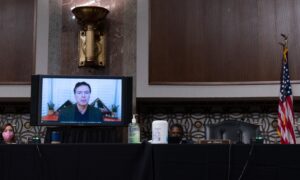 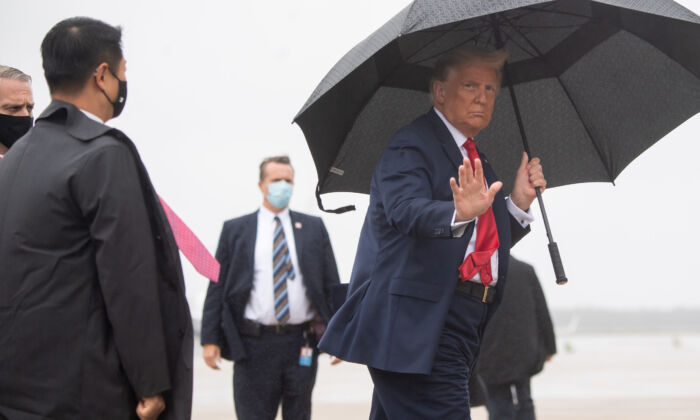 President Donald Trump boards Air Force One prior to departure from Joint Base Andrews in Maryland on Oct. 12, 2020. (Saul Loeb/AFP via Getty Images)
Crossfire Hurricane

The White House told the Department of Justice (DOJ) that President Donald Trump’s tweets about declassifying “any & all documents” related to the Russia probe and the Clinton-email investigation didn’t actually declassify anything.

The DOJ disclosed the message in a filing before a federal court on Oct. 13, in response to a motion in a Freedom of Information Act (FOIA) lawsuit seeking the release of interview summaries from special counsel Robert Mueller’s Russia investigation. The plaintiffs in the lawsuit asked the court whether Trump’s declassification should be taken to mean that the records sought are now declassified.

“The president’s recent statements on Twitter referencing the ‘declassification’ of information were not an order to the Department of Justice to declassify the materials in this case,” the DOJ told the court. “The Twitter statements do not constitute a self-executing declassification order.”

The FBI finished processing and redacting more than 4,000 pages of typewritten interview summaries from the Mueller investigation on Oct. 1, according to the filing. On Oct. 6, Trump sent a pair of tweets suggesting that he had ordered the declassification of all Russia probe and Clinton email records with “no redactions.”

“I have fully authorized the total Declassification of any & all documents pertaining to the single greatest political CRIME in American History, the Russia Hoax. Likewise, the Hillary Clinton Email Scandal. No redactions!” the president wrote.

“All Russia Hoax Scandal information was Declassified by me long ago. Unfortunately for our Country, people have acted very slowly, especially since it is perhaps the biggest political crime in the history of our Country. Act!!!”

I have fully authorized the total Declassification of any & all documents pertaining to the single greatest political CRIME in American History, the Russia Hoax. Likewise, the Hillary Clinton Email Scandal. No redactions! https://t.co/GgnHh9GOiq

Despite the president’s statements, the DOJ and the Office of the Director of National Intelligence (DNI) in subsequent days released several heavily redacted documents related to the Russia probe.

Two days after the tweets, the plaintiffs in the FOIA lawsuit—Buzzfeed and CNN—filed an emergency motion arguing that the president’s statements entitled them to the information they sought. The court ordered the government to explain if this is the case and to “confer with the White House in order to advise the court as to the White House’s official position regarding the declassification and release to the public of information related to the Russia investigation.”

The White House told the DOJ that the president’s tweets “were not self-executing declassification orders and do not require the declassification of any particular documents,” according to a declaration filed with the government’s response.

“The department was further informed that the president’s statements on Twitter do not require altering any redactions on any record at issue in this case,” the declaration states.

Trump has for years lambasted the FBI’s investigation of his campaign, which evolved into the Mueller inquiry. As part of the investigation, the FBI sent spies to target members of the campaign and obtained an intrusive Foreign Intelligence Surveillance Act (FISA) warrant on a former campaign adviser. The FISA applications were riddled with errors and omissions implicating the entire chain of command at the bureau, according to the DOJ Office of Inspector General. In obtaining the warrants, the bureau used an unverified dossier compiled by a British ex-spy who was ultimately paid by the Hillary Clinton presidential campaign.

The FBI investigation was also clouded by an anti-Trump bias among key FBI officials involved, including Deputy Assistant Director Peter Strzok and FBI attorney Lisa Page, who texted about stopping Trump from becoming president and an “insurance policy” in the unlikely event he won the election.

Despite an abundance of apparent malfeasance, many of the underlying records remain either partly classified or haven’t yet been released, making it impossible for the public to judge the full context of what occurred. The redactions and selective declassifications have also fueled criticism from the president’s opponents. Former CIA Director John Brennan on Oct. 6 accused the Trump administration of selectively declassifying agency records for political gain.

“It is appalling his selective declassification of information that clearly is designed to advance the political interests of Donald Trump and Republicans who are aligned with him,” Brennan told CNN.

Director of National Intelligence John Ratcliffe, at the direction of the president, on Oct. 6 released two pages of heavily redacted handwritten notes (pdf) taken by Brennan on a briefing he provided to President Barack Obama in late July 2016.

Brennan’s notes describe an intercept of Russian intelligence claiming that Clinton approved a plan to stir up a scandal about then-candidate Donald Trump by linking the Trump campaign to the alleged Russian hack of the Democratic National Committee.

Alongside the notes, the DNI released a heavily redacted three-page memo (pdf) dated Sept. 7, 2016, from the CIA to the FBI that stated that Clinton’s plan was meant to distract the public from the Clinton email scandal.

The vast majority of both documents was blacked out prior to release, blocking any efforts to ascertain the full context of the portions released to the public.