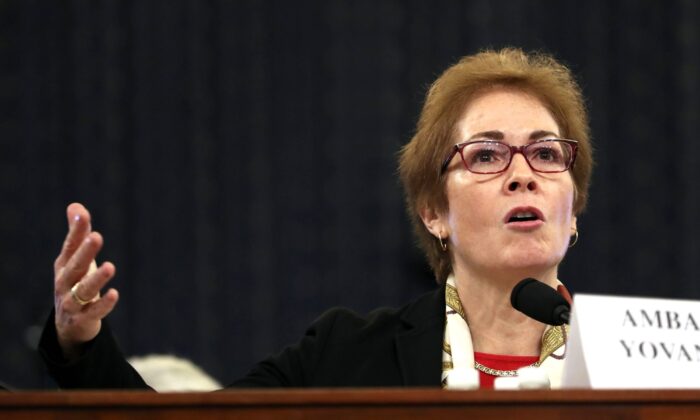 Trump’s Tweet About Yovanovitch, While Likely Not Intimidating, Shouldn’t Have Been Sent

During the course of her testimony, Trump issued a tweet about Yovanovitch.

Immediately thereafter, some Democrats in the House accused the president of witness intimidation. While this conclusion is likely incorrect, the president shouldn’t have sent the tweet, nonetheless.

The relevant statute at issue is 18 U.S.C. 1512. While the statute contains various sections, Democrats would most likely refer to 18 U.S.C. 1512 (c), which is generally construed as the “catch-all” section of the witness tampering statute. This section reads, in its entirety:

(1) alters, destroys, mutilates, or conceals a record, document, or other object, or attempts to do so, with the intent to impair the object’s integrity or availability for use in an official proceeding;

(2) otherwise obstructs, influences, or impedes any official proceeding, or attempts to do so, shall be fined under this title or imprisoned not more than 20 years, or both.”

This section, unlike some others, doesn’t contain a “knowledge” requirement. For example, 18 U.S.C. 1512 (b), which is frequently utilized by prosecutors in cases involving witness tampering or intimidation, states:

“(b) Whoever knowingly uses intimidation, threatens, or corruptly persuades another person, or attempts to do so, or engages in misleading conduct toward another person, with intent to—

(1) influence, delay, or prevent the testimony of any person in an official proceeding;

(2) cause or induce any person to—

(A) withhold testimony, or withhold a record, document, or other object, from an official proceeding;

(B) alter, destroy, mutilate, or conceal an object with intent to impair the object’s integrity or availability for use in an official proceeding;

(C) evade legal process summoning that person to appear as a witness, or to produce a record, document, or other object, in an official proceeding; or

(D) be absent from an official proceeding to which such person has been summoned by legal process; or

(3) hinder, delay, or prevent the communication to a law enforcement officer or judge of the United States of information relating to the commission or possible commission of a Federal offense or a violation of conditions of probation [1] supervised release, parole, or release pending judicial proceedings;

shall be fined under this title or imprisoned not more than 20 years, or both.”

As such, under Section (b), a prosecutor would have to prove that a defendant had the requisite intent to “knowingly” intimidate, threaten, or corruptly persuade to achieve his or her unlawful goal.

Section (c), on the other hand, requires showing that a person acted “corruptly.” In Arthur Andersen LLP v. United States, the Supreme Court, by way of Chief Justice William Rehnquist, explained that “corrupt” conduct was “normally associated with wrongful, immoral, depraved or evil” actions, which requires a consciousness of wrongdoing:

“Only persons conscious of wrongdoing can be said to ‘knowingly … corruptly [persuade].’ And limiting criminality to persuaders conscious of their wrongdoing sensibly allows Section 1512(b) to reach only those with the level of ‘culpability … we usually require in order to impose criminal liability.’ United States v. Aguilar, 515 U. S., at 602; see also Liparota v. United States, supra, at 426.

“The outer limits of this element need not be explored here because the jury instructions at issue simply failed to convey the requisite consciousness of wrongdoing. Indeed, it is striking how little culpability the instructions required. For example, the jury was told that, ‘even if [petitioner] honestly and sincerely believed that its conduct was lawful, you may find [petitioner] guilty.’ App. JA–213. The instructions also diluted the meaning of ‘corruptly’ so that it covered innocent conduct. Id., at JA–212.”

Against this backdrop, the question, then, is whether Trump’s tweet, in and of itself, amounts to witness intimidation. The president’s tweet read, in its entirety:

“Everywhere Marie Yovanovitch went turned bad. She started off in Somalia, how did that go? Then fast forward to Ukraine, where the new Ukrainian President spoke unfavorably about her in my second phone call with him. It is a U.S. President’s absolute right to appoint ambassadors.”

The president’s tweet appears to consist of nothing more than his personal opinion and thoughts about Yovanovitch. While the timing of his tweets wasn’t ideal, given that it coincided with Yovanovitch’s live testimony, it’s hard to fathom how the language in this tweet could be construed as a corrupt attempt to obstruct, influence, or impede Yovanovitch’s testimony pursuant to Section (c). It would be even more difficult to find a violation of Section (b) in light of the “knowledge” requirement.

“(d) Whoever intentionally harasses another person and thereby hinders, delays, prevents, or dissuades any person from

(1) attending or testifying in an official proceeding or attempts to do so, shall be fined under this title or imprisoned not more than 3 years, or both.”

Assuming that the tweet was harassing or intimidating in nature (which is highly unlikely), the fact that the tweet was sent while Yovanovitch was testifying raises an interesting question as to whether a tweet that she was unaware of (Schiff brought it to her attention) could serve as the basis of an intimidation charge. If the tweet supposedly impacted her willingness to possibly testify in the future, it would likely have to satisfy the nexus requirement set forth in Arthur Andersen.

Even if the president’s tweet isn’t deemed to be “actionable” pursuant to 18 U.S.C. 1512 (or obstructive in nature), it was unwise, nonetheless.

The president is the subject of an impeachment inquiry and doesn’t need to provide House Democrats with any additional reasons to pursue him, no matter how seemingly weak they are.

While the president is understandably frustrated with House Democrats and the manner in which they have conducted the impeachment inquiry to date, House Republicans have done a masterful job of defending him during the course of the public hearings and in the eyes of the American public.

As a result, and for the time being, it might be in the president’s best interest to be a bit more cautious or selective with his tweets relative to the impeachment inquiry, so long as it continues pressing forward.