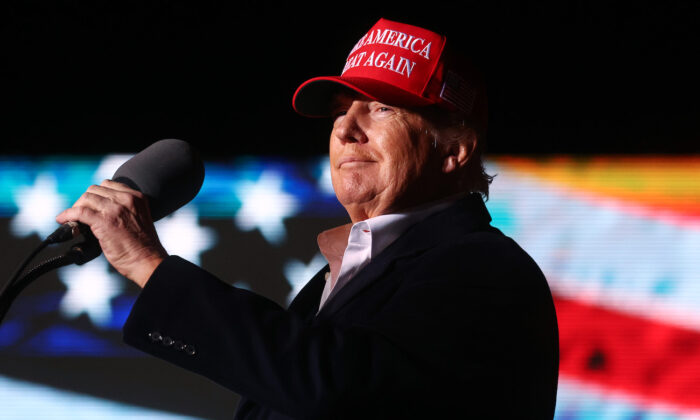 As of Tuesday morning, more than 1.5 billion people had viewed the app in the App Store. More than 401,000 were receiving notices that they were placed on a waitlist when they tried to sign up.

“Due to massive demand, we have placed you on our waitlist,” the notification said. “We love you, and you’re not just another number to us.”

TRUTH Social is currently only available on Apple platforms. It’s not clear when it will be available for Android phones.

As of Tuesday morning, it doesn’t appear that Trump has made any posts on TRUTH Social.

Trump, who had amassed tens of millions of followers on mainstream social media platforms, was suspended in January 2021 by Twitter, Facebook, and YouTube following the U.S. Capitol breach at the Stop the Steal rally on Jan. 6. Since then, the former president has not joined any other platforms, such as Gab, Parler, MeWe, or Gettr, where his former spokesman, Jason Miller, serves as president.

After Trump’s accounts were suspended, critics of the censorship said that it suggested that Big Tech would implement increasingly draconian policies around certain topics, including the 2020 election, COVID-19, and vaccines.

Former Rep. Devin Nunes (R-Calif.) stepped down from his congressional position and took an offer to head the Trump Media & Technology Group (TMTG), the venture behind TRUTH Social.

“This week we will begin to roll out on the Apple App Store. That’s going to be awesome, because we’re going to get so many more people that are going to be on the platform,” Nunes said in a Sunday interview on Fox News’ “Sunday Morning Futures with Maria Bartiromo.”

TMTG is planning to list in New York through a merger with blank-check firm Digital World Acquisition Corp (DWAC) and stands to receive $293 million in cash that DWAC holds in a trust, assuming no DWAC shareholder redeems their shares, TMTG said in an Oct. 21 news release.

Additionally, in December TMTG raised $1 billion in committed financing from private investors; that money also will not be available until the DWAC deal closes