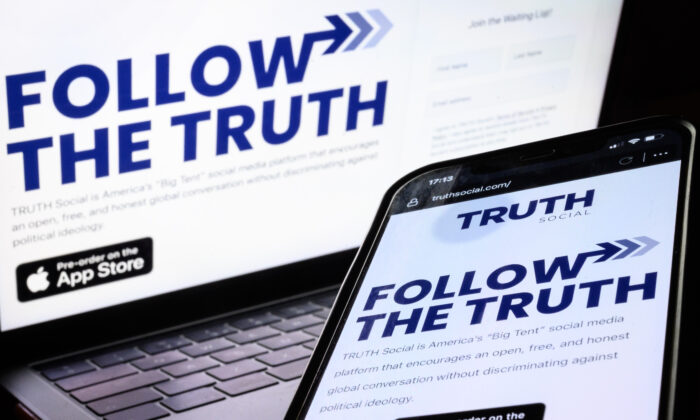 In this photo illustration, the holding screen for the "Truth Social" platform and app is seen in London on Jan. 4, 2022. (Leon Neal/Getty Images)
Donald Trump

Truth Social, a social media platform owned by former President Donald Trump, saw a surge in downloads after the FBI raided his Mar-a-Lago residence on Aug. 8, according to reports.

Downloads of the Truth Social app skyrocketed by nearly 550 percent in the week after the FBI raid, Vice News reported on Aug. 19, citing data from Data AI, a company that provides analysis based on consumer and market data.

The app, made available on Apple’s App Store in February, was downloaded fewer than 20,000 times, with an average of about 2,500 downloads daily, in the week prior to the FBI raid.

According to Data AI, Truth Social has now been downloaded approximately 3 million times, up from about 2 million downloads just two weeks after the app was launched.

Similarweb, a digital intelligence provider, reported a similar spike with the Truth Social app following the FBI, according to Sky News. It found that the app downloads increased from 1,386 to 6,545 the day after the raid.

The former president has also seen a significant increase in the number of his Truth Social followers. On Aug. 7, Trump had about 3.7 million followers, but that number topped 3.9 million on Aug. 18.

Trump took to Truth Social to announce that his home was “under siege” on Aug. 8 after some 30 FBI agents showed up.

He followed up his announcement by posting a four-minute video in the early hours of Aug. 9.

One of his latest Truth Social posts announced that he had filed a motion in the District Court for the Southern District of Florida to prevent the Department of Justice from reviewing documents seized from his home.

Trump has also taken to his Truth Social account to announce the endorsement of political candidates in the Nov. 8 general elections. On Aug. 22, he endorsed Shane Hernandez, who is the running mate of Tudor Dixon, the GOP nominee for Michigan’s governor in November. Dixon, who is also endorsed by Trump, secured her nomination on Aug. 2.

“Tudor and Shane are committed to securing Michigan’s elections, fighting against the radical indoctrination of our children, saving the 2nd amendment, being tough on crime and working to bring JOBS back to Michigan,” Trump wrote in his endorsement. “The MAGA movement in Michigan is stronger than ever, and we must make Michigan Trump Red in November.”

On its website, Truth Social describes itself as “America’s ‘big tent’ social media platform that encourages an open, free, and honest global conversation without discriminating against political ideology.”