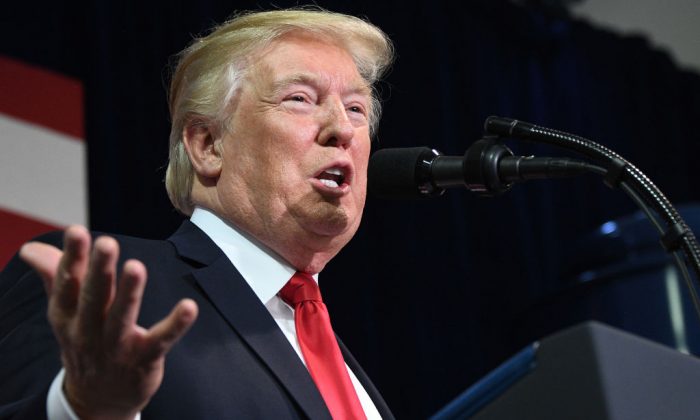 Time, cost, and stress would be reduced for taxpayers under the new code
By Emel Akan
Print

For millions of Americans, tax day is their least favorite day of the year. It reminds them of how the U.S. tax system has become more complex and onerous.

“The tax code is now a massive source of complexity and frustration for tens of millions of Americans,” said President Donald Trump, during his opening pitch on tax reform in Springfield, Missouri, on Aug. 30.

Simplifying the tax code was the first promise he laid out in his speech.

“We need a tax code that is simple, fair, and easy to understand,” he said.

American taxpayers spend over 6 billion hours each year on complying with IRS tax filing rules, according to the IRS’s Taxpayer Advocate Service. And this costs the U.S. economy more than $260 billion annually in lost productivity, according to the National Taxpayers Union.

It would be hard for anyone to disagree with Trump’s effort to streamline the system, said Roger Harris, president of Padgett Business Services, a small-business tax advisory firm based in Athens, Georgia.

The tax reform is expected to be a boon for small businesses, which are burdened with the complexity of the U.S. tax code.

The annual cost of tax compliance for small businesses is between $15 billion and $16 billion, according to the National Federation of Independent Business.

“We badly need tax simplification because the cost of preparing taxes—plus the enormous amounts of time spent trying to understand our business and personal tax requirements—is staggering,” Savage said.

Since then, however, the tax code has changed dramatically in length and scope with the addition of new pages of statutes, regulations, and case law.

“Our tax laws have tripled in size, and the tax code itself now spans more than 2,600 pages, and most of it is not understandable,” Trump said.

“Tax rates have increased, and special interest loopholes have crept back into the system.”

The current loopholes and complexity mainly benefit the wealthiest Americans and special interest groups, according to Trump. For this reason, he says the new tax code will be fairer.

Harris explained, “Every deduction and every credit in the tax code has an audience, and that audience is the special interest for that deduction. Some we accept, some we question and think are unfair.”

There are credits and deductions that are industry-specific or company-specific, and those are the kinds that politicians refer to as being unfair, he said.

The majority of American voters are dissatisfied with the current federal income tax system. According to a survey commissioned by America First Policies, 71 percent of respondents want lower taxes for ordinary, middle-class American families. The survey also found that 68 percent believe that simplifying the tax code would make it easier for the average American to file their own taxes.

Trump wants the majority of taxpayers to be able to file their taxes on a single, simple page without having to hire an adviser.

“The tax code is so complicated that more than 90 percent of Americans need professional help to do their own taxes,” he said.

The basic 1040 form used by most American families had two pages of instructions in 1935. Today, the instructions have grown to 241 pages.

The complexity of the tax code and the cost of compliance have been overlooked for years.

“It’s very difficult to get enough people around the table, even though they agree on the fact that simplification is needed,” said Harris.

“Everyone can agree on ‘simple,’ but their definition of ‘fair’ differs, and sometimes that makes it hard to get people to agree.” Hence, Harris says most of his clients are in a “wait and see” mode.

“They’ve seen this [tax reform] discussion happen in the past many times, so they’re skeptical until they see something become a reality.”

Mark Aselstine, from San Mateo, California, thinks the tax reform will be a win for his small business, if passed. Aselstine is the founder of the startup company Uncorked Ventures, an online wine-club business.

“One thing that struck me about the tax proposal was basically that it’s extensive and offers a massive reorganization of the nation’s code,” he said.

“But I have to wonder what the chances of passage really are,” he said. “I’ll believe it when I see it.”