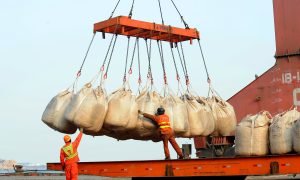 WASHINGTON—Since President Donald Trump was elected in 2016, he has made trade one of his key policy priorities. His rejection of globalism, support for U.S. national security, and retaliation against unfair foreign trade practices marked a fundamental shift in America’s trade policy.

Trump pursued trade protectionism, which has ironically long been a Democratic priority. But he repeatedly asserted that he favored trade that was both free and fair.

“First of all, I understand the benefits of trade. I just want a better deal for American businesses and workers,” Trump told his campaign’s economic advisers, Stephen Moore and Arthur Laffer, who co-authored the book “Trumponomics.”

His focus on bringing back jobs and protecting American businesses was one of the pillars that shaped his economic policies, including trade.

After his election, he followed through on his promises and began ending what he called “broken trade deals.” In one of his first acts as president, Trump withdrew the United States from the Trans-Pacific Partnership (TPP). He discarded the U.S.–European Transatlantic Trade and Investment Partnership negotiations. He announced plans to renegotiate the terms of the North American Free Trade Agreement (NAFTA), which he called “the worst trade deal in the history of the country.”

Trump made it clear that he preferred bilateral trade deals to regional or multilateral agreements.

He and his administration saw the big advantage of bilateral deals. They knew that the United States, being the world’s largest economy, would be able to get more concessions from its bilateral partners than its multilateral partners.

Trump launched a tariff campaign early this year, as part of his hard-nosed strategy to level the playing field for American workers and end unfair trade practices against the United States.

A few weeks later, Trump announced his first trade win in reaching a deal with South Korea. According to the White House, it was the first renegotiation of a trade pact in U.S. history. Both sides signed the revised bilateral free trade deal known as the U.S.–Korea Free Trade Agreement (KORUS) in September.

Through this deal, the United States has reduced steel imports from South Korea by 30 percent and has gained concessions for U.S. automotive exports. Trump boasted about his deal, saying that the new agreement would reduce the U.S. trade deficit with South Korea and widen opportunities for American exporters.

The deal has important national security implications as well, since it reduces America’s dependence on foreign steel and aluminum. Tariffs on metals imposed in March sparked reinvestment in domestic production, bringing back thousands of jobs.

Former Sen. Evan Bayh (D-Ind.), who advocates for tariffs, says the metals are essential to the U.S. defense industry.

“That’s why it is important that we retain at a minimum the capacity to produce steel and aluminum products necessary for our military,” he said at an event hosted by the American Primary Aluminum Association.

The Trump administration also reached a deal with the European Union, declaring a “new phase” in relations. Trump and European Commission President Jean-Claude Juncker agreed to work together to eliminate tariffs and other trade barriers on all industrial goods. For the first time, both sides reached an understanding to cooperate against unfair trade practices and reform the World Trade Organization (WTO).

Trump’s tariff strategy also put pressure on Tokyo to enter bilateral trade talks with Washington. Japanese Prime Minister Shinzo Abe had earlier resisted bilateral talks, preferring a multilateral trade pact with the United States under the TPP. In September, both sides agreed to begin negotiations for a bilateral free-trade agreement. In hope of avoiding U.S. tariffs on imported autos, Abe was rumored to have made concessions to the United States by departing from his earlier stance.

The Trump administration landed its biggest trade win this year by overhauling the 24-year-old NAFTA and ending tensions with two of the United States’ biggest trading partners, Canada and Mexico. The three countries signed on Nov. 30 a new trade deal, the U.S.–Mexico–Canada Agreement (USMCA), on the sidelines of the G-20 Summit in Argentina. The pact has to be ratified by lawmakers in the three countries.

Critics called the deal a minor update to NAFTA. The new pact, however, has strong labor rules, which makes it an important milestone for international trade.

Trump succeeded in altering the agreement in ways that Democrats have longed to achieve for years, said Edward Alden, a senior fellow at the Council on Fore­­­ign Relations, praising Trump’s accomplishment.

The new “rules of origin” on cars is a substantial improvement to the old agreement, which promotes production and jobs in the region. Under the new deal, 75 percent of automobiles’ content must come from North America, up from the original threshold of 62.5 percent. The rules also incentivize the use of high-wage manufacturing labor in the auto sector.

The new deal with Canada and Mexico also revealed Washington’s plan to isolate Beijing in a new global trade order by edging China out of trade deals with allies. The USMCA has a so-called “poison pill” provision that essentially blocks any trade flirtation with China.

According to the agreement, “entry by any party into a free-trade agreement with a non-market country” like China would allow the other parties to terminate the pact.

Patrick Mulloy, a former member of the U.S.–China Economic and Security Review Commission, called it a “brilliant provision.”

“Because that changes the whole parameters,” Mulloy said during an interview in October.

Trump’s trade war with Beijing goes beyond the rationale of reducing the U.S. trade deficit with China. For years, the Chinese communist regime has refused U.S. demands that it change its unfair trade practices.

The United States has accused China of stealing key technologies and intellectual property (IP) from foreign companies using various tactics that include physical and cyber theft and forced technology transfers.

Since China’s accession to the WTO in 2001, globalization has been all about incorporating China, according to Diana Cheylova, chief economist of Enodo Economics.

“Despite joining the WTO, China never became a fully-fledged market economy, which the Americans expected,” she said.

According to Cheylova, the Chinese people were the primary beneficiaries of globalization. Meanwhile, “a large chunk of the electorate in the Western World felt left behind” in relative terms, she said.

In December, Trump came away from the G-20 summit with several triumphs, including a trade truce with China and the WTO reform.

Trump and his Chinese counterpart Xi Jinping declared a 90-day ceasefire on tariff increases on Dec. 1 at the end of their bilateral meeting on the sidelines of the summit. As part of the deal, China for the first time made a firm commitment to deliver structural reforms to address Washington’s long-standing concerns.

It is not clear whether China will fulfill its pledges within the 90-day ceasefire. However, “if it happens, it goes down as one of the largest deals ever made,” Trump said after the meeting.

During the summit, leaders of the world’s top economies also agreed for the first time to reform the 23-year-old WTO, backing Trump, who has repeatedly called the organization a “disaster.”

The G-20 countries collectively acknowledged that the multilateral system was failing and needed improvement.