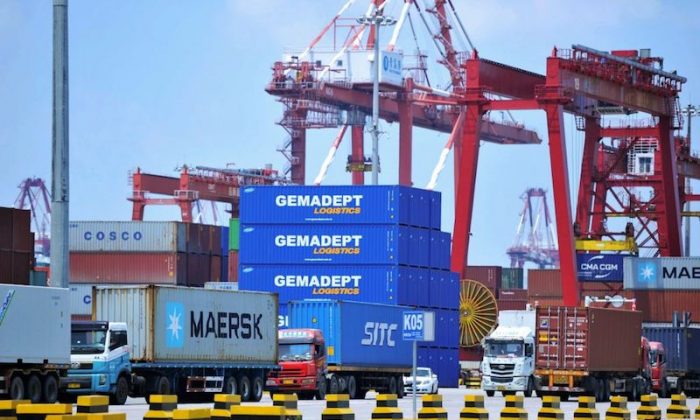 Containers are transferred at a port in Qingdao in China's eastern Shandong province on July 6, 2018. (Photo credit should read -/AFP/Getty Images)
US News

U.S. President Donald Trump is pushing his trade conflict with China toward a point where neither side can back down.

By Aug. 30, as the U.S. nears mid-term elections vital for Trump’s legislative agenda, the White House will be ready to impose 10 percent tariffs on $200 billion of Chinese-made products, ranging from clothing to television parts to refrigerators. The levies announced July 10—together with some $50 billion already in the works—stand to raise import prices on almost half of everything the U.S. buys from the Asian nation.

China has seven weeks to make a deal or dig in and try to outlast the U.S. leader. President Xi Jinping, facing his own political pressures to look tough, has vowed to respond blow-for-blow. He’s already imposed retaliatory duties targeting Trump’s base including Iowa soybeans and Kentucky bourbon.

Yet matching the latest U.S. barrage would force China to either levy much higher tariffs or take more disruptive steps like canceling purchase orders, encouraging consumer boycotts and putting up regulatory hurdles. Not only does that risk provoking Trump to follow through on threats to tax virtually all Chinese products, it could unleash nationalist sentiment on both sides that fuels a deeper struggle for geopolitical dominance.

Trump on July 11 framed his trade actions as necessary to shield American businesses and farmers from harmful trading practices.

“Other countries’ trade barriers and tariffs have been destroying their businesses. I will open things up, better than ever before, but it can’t go too quickly,” Trump said in a Twitter post from Brussels, where he’s attending a NATO summit. “I am fighting for a level playing field for our farmers, and will win!”

“It’s already past the point of no return,” said Pauline Loong, managing director at research firm Asia-Analytica in Hong Kong. “What’s next is not so much a trade war or even a cold war as the dawn of an ice age in relations between China and the United States.”

Stocks fell and commodities slid with emerging-market assets July 11 as investors assessed the fallout. The S&P 500 Index ended the longest rally in a month and the Stoxx Europe 600 Index retreated. While earlier tariffs were expected to have only a limited impact, economists warn a full-blown trade war could derail the strongest economic upswing in years.

The Chinese Commerce Ministry said July 10 that it would be forced to retaliate against what it called “ totally unacceptable” U.S. tariffs. There have been no confirmed high-level talks between the two sides since an early June visit to Beijing by U.S. Commerce Secretary Wilbur Ross that achieved no breakthroughs.

Beijing “never yields to threat or blackmail” and will retaliate against the “groundless” tariffs, China’s Vice Minister of Commerce Wang Shouwen said in written comments. “The U.S. side ignored the progress, adopted unilateral and protectionist measures, and started the trade war.”

The Aug. 30 date ensures the trade fight features prominently in November’s U.S. congressional elections, and the announcement exposed fissures between Trump and his Republican Party about the strategy. House Ways and Means Committee chief Kevin Brady, of Texas, warned of “a long, multi-year trade war between the two largest economies in the world that engulfs more and more of the globe.”

Senate Finance Committee Chairman Orrin Hatch, of Utah, called the new levies “reckless” and not “targeted.” Senator Chuck Grassley, a Republican from Iowa, said he had a “great deal of concern” about the trade spat with China and the level of uncertainty it’s creating among farmers and businesses in his state.“When you don’t know what’s going to be the outcome, it’s very uncertain, and it’s had a definite impact,” he said. “How long is this going to go on? I hope we can settle pretty soon.”

The latest move suggests that Trump—who in March declared that “trade wars are good and easy to win”—may be compromising on his pledge to spare consumers from the pain. The tariffs could raise the prices of everything from baseball gloves to handbags to digital cameras just as voters are heading to the polls. Other high-profile items such as mobile phones have so far been spared.

The U.S. felt it had no choice, but to move forward on the new tariffs after China failed to respond to the administration’s concerns over unfair trade practices and Beijing’s abuse of American intellectual property, according to two senior officials who spoke to reporters. The Trump administration has so far rejected Chinese offers to trim its massive trade surplus by buying more American goods and is demanding more systemic change.

“For over a year, the Trump administration has patiently urged China to stop its unfair practices, open its market, and engage in true market competition,” Trade Representative Robert Lighthizer said in a statement. “China has not changed its behavior—behavior that puts the future of the U.S. economy at risk.”

Although the looming elections provide an immediate concern for Trump, a trade war poses a more existential concern for Xi, whose Communist Party has built its legitimacy on economic success. Prominent academics and some government officials have begun to question if China’s slowing, trade-dependent economy can withstand a sustained attack from Trump, which has already weighed heavily on stock prices.

Among other things, the U.S. is asking China to roll back its “Made-in-China 2025” program, a signature Xi initiative to dominate several strategic industries, such as semiconductors to aerospace development. Since abolishing presidential term limits, Xi has strengthened his control over the levers of power and money in China and can’t afford to look weak.

“China is showing no signs of backing down and instead looks like it is preparing for a drawn-out conflict,” said Scott Kennedy, deputy director of China studies at the Center for Strategic and International Studies in Washington. “China has a million and one ways to retaliate.”