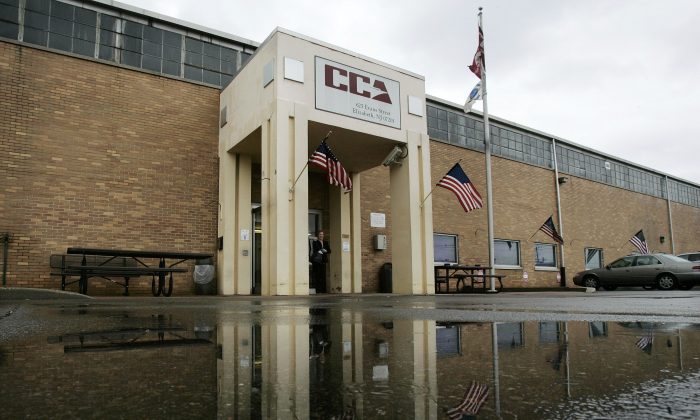 BOISE, Idaho—The population of American prisons is likely to rise for the first time in nearly a decade with President-elect Donald Trump’s promise to detain and deport millions of immigrants who are in the country illegally and his selection of tough-on-crime Sen. Jeff Sessions to the nation’s highest law enforcement post.

If so, one of the prime beneficiaries would be the private companies that operate many of the nation’s prisons. The stock market seems to agree.

The federal prison population had been trending down for nearly a decade when the Obama administration announced in August that it would phase out its use of some private facilities.

The policy change did not cover private prisons used by Immigration and Customs Enforcement, though federal officials have said they are considering phasing out private contractor immigration facilities.

Trump, however, said during his campaign that the nation’s prison system was a mess and voiced support for private prisons.

“I do think we can do a lot of privatizations and private prisons. It seems to work a lot better,” Trump told MSNBC in March, though he didn’t offer any details on what that might mean for the federal prison system.

Immigration and Customs Enforcement holds up to 34,000 immigrants awaiting deportation. Forty-six of the roughly 180 facilities in which ICE holds those immigrants are privately run, with about 73 percent of detainees held in the private facilities, the agency says.

“Trump was saying during his 100-day plan that mandatory minimums for people re-entering the country would be set at two years—that’s going to require a longer-term need for beds,” said Michael Kodesch, a senior associate with financial services firm Canaccord Genuity Inc.

Immigration detention centers are particularly profitable for private prison companies because they command a higher rate for each inmate bed, he said.

Yet what’s good for investors isn’t good for the country, said Bob Libal, executive director of Grassroots Leadership, a national nonprofit group that works to reduce incarceration and detention rates.

Sessions, Trump’s pick for attorney general, was among a handful of Republican senators blocking a bipartisan bill that would reduce lengthy sentences for low-level drug offenders.

McLaurine Klingler, a spokeswoman for Sessions, said no one on Sessions’ staff was immediately available to talk about his feelings on the DOJ’s use on private prisons.

CoreCivic spokesman Jonathan Burns said the company doesn’t take positions on proposals, legislation or policies that would determine the basis of an individual’s incarceration or detention.

He said the company instead works to “educate lawmakers on the benefits of public-private partnership generally and the solutions CoreCivic provides.”