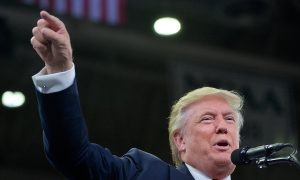 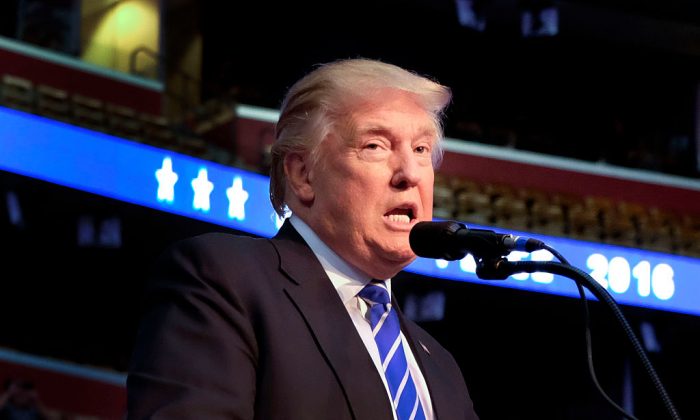 Donald Trump says the Secret Service did not have a conversation with him over comments he made earlier this week about Second Amendment voters and Hillary Clinton.

“No such meeting or conversation ever happened—a made up story by “low ratings” @CNN,” said Trump in a tweet.

No such meeting or conversation ever happened – a made up story by ‘low ratings’ @CNN.

CNN had reported that there had been talks between the GOP candidate and the Secret Service. A source told CNN’s Jim Sciutto that campaign aides told the Secret Service that Trump did not intend to ignite violence. Sciutto defended his story on Wednesday.

Epoch Times reached out to the Secret Service who said they were “aware” of the comments Trump made but declined to comment further.

An unnamed federal official told Reuters on Wednesday that the Secret Service did not formally speak with Trump.

“Reuters just announced that Secret Service never spoke to me or my campaign,” Trump tweeted.

Reuters just announced that Secret Service never spoke to me or my campaign. Made up story by @CNN is a hoax. Totally dishonest.

The Republican presidential candidate was speaking at a rally in Wilmington, North Carolina about his Democratic opponent Hillary Clinton possibly appointing liberal justices if she is elected.

“By the way, if she gets to pick her judges, nothing you can do folks,” he continued. “Though the Second Amendment people—maybe there is, I don’t know.”

After Trump’s comment, Rep. Eric Swalwell (D-CA) called for the Secret Service to investigate the GOP candidate over his remarks.

“Donald Trump suggested someone kill Sec. Clinton. We must take people at their word,” said Swalwell on Twitter.

Donald Trump suggested someone kill Sec. Clinton. We must take people at their word. @SecretService must investigate #TrumpThreat.

Clinton responded to Trump’s comments on Wednesday accusing him of suggesting violence.

“Words matter, my friends. And if you are running to be president or you are president of the United States, words can have tremendous consequences,” Clinton said at a rally in Des Moines, Iowa.

Meanwhile, Ronald Reagan’s daughter, Patti Davis, called Trump’s Second Amendment comment “horrifying” in a Facebook post on Wednesday. She cited the incident in which then-President Reagan was shot by John Hinckley in 1981.

“Your glib and horrifying comment about ‘Second Amendment people’ was heard around the world. It was heard by sane and decent people who shudder at your fondness for verbal violence. It was heard by your supporters, many of whom gleefully and angrily yell, “Lock her up!” at your rallies,” wrote Reagan’s daughter.

“It was heard by the person sitting alone in a room, locked in his own dark fantasies, who sees unbridled violence as a way to make his mark in the world, and is just looking for ideas,” she added.