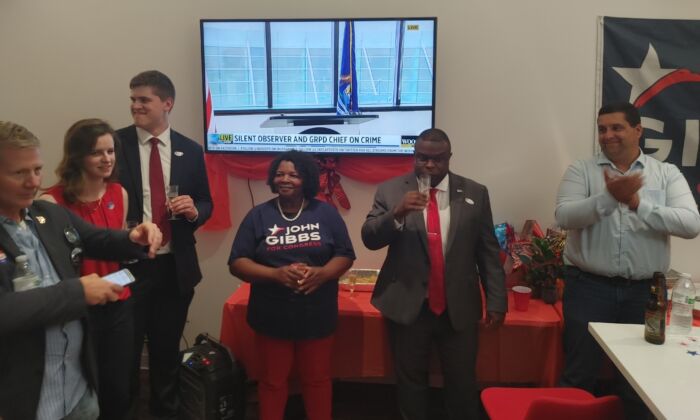 It was another test for the House GOP lawmakers who voted to impeach Trump following the U.S. Capitol breach on Jan. 6, 2021.

Meijer, whose surname is familiar because of his family’s national supercenter chain that’s based in Michigan, was the only freshman legislator in the group of 10 House Republicans who chose to impeach the president in the final days of his administration.

Among the 10 House Republicans who supported impeachment, four decided not to seek reelection. Of the other, Rep. Tom Rice lost his primary in South Carolina by around 27 percentage points to Trump-endorsed challenger Russell Fry. California Rep. David Valadao prevailed in his primary.

Rep. Liz Cheney (R-Wyo.) is the final House Republican who voted for Trump’s impeachment to face a primary. Cheney is vice chair of the committee investigating the Jan. 6 events at the U.S. Capitol. Wyoming’s primary is Aug. 16.

Before the results were announced, Roll Call elections analyst Nathan Gonzales told reporters that the Aug. 2 primaries “could confirm an emerging trend: Republicans who voted to impeach Trump either don’t seek reelection or lose in traditional primaries.”

“Pro-impeachment Republicans who have the luxury of running in states with nontraditional primaries [and don’t have to rely on support from base GOP voters] have a chance to survive,” Gonzales said.

“That’s good news for Herrera Beutler and Newhouse and bad news for Meijer, and later Cheney.”

Many political pundits suggested that Herrera Beutler and Newhouse would benefit from Washington’s open, nonpartisan primary system where the top two finishers, regardless of party affiliation, move on to the general election.

In Michigan’s 3rd District, Gibbs was a little-known candidate when he entered the race.

He served as a Department of Housing and Urban Development official under Dr. Ben Carson during the Trump administration and was appointed by Trump to lead the Office of Personnel Management but wasn’t confirmed by the U.S. Senate.

Meijer embraced his role as the only freshman legislator who, three days after being sworn into office, voted to impeach Trump on Jan. 13, 2021.

Gibbs consistently reminded voters that Meijer not only cast a vote to impeach Trump, but also supported gun control and aligned with House Democrats on other bills.

At his watch party in Byron Center, Gibbs socialized with supporters early and then joined campaign staffers in a separate room as results poured in. He gained an early lead, but then Meijer caught up and led by a percentage point.

Around 11 p.m., the once boisterous party became quieter. Spirits were lifted when Gibbs walked into the room, addressed the crowd, and told them, “We like where we are.” At that point, the only votes left to be counted were in areas that were favorable for Gibbs.

Gibbs was right. Over the next hour, he regained the lead and won by more than 4 percentage points, according to Decision Desk HQ.

Just got a call from President Trump, congratulating me and my team on tonight’s big win! Thank you, Mr. President for your support! pic.twitter.com/43BZfvqBEo

“Fantastic night in Michigan. Tudor Dixon will be a great governor. John Gibbs won with a big surge in the end. Not a good time for impeachers—7 down, 3 to go! Thank you Michigan!” he wrote, hours before Herrera Beutler and Newhouse won their primaries in Washington.

Meijer, who graduated from Columbia University and served in Iraq as a member of the Army Reserves, issued a statement after calling Gibbs to concede.

“A Constitutional Republic like ours requires leaders who are willing to take on the big challenges, to find common ground when possible, and to put their love of country before partisan advantage,” Meijer said in the statement.

“Though this was not the outcome we hoped for, I will continue to do everything possible to move the Republican Party, West Michigan, and our country in a positive direction.

“I also want to congratulate my opponent, John Gibbs, on his victory tonight. I’m proud to have remained true to my principles, even when doing so came at a significant political cost.”

On Aug. 3, the Democratic Congressional Campaign Committee (DCCC) issued a statement attacking Gibbs as a “far-right extremist who was carried over the finish line in his primary only by the most fringe elements of his party.”

Meijer was in the news on Aug. 1 when he blamed the DCCC for funding a $435,000 ad that appeared to attack Gibbs, calling him “too conservative for west Michigan” and reminding viewers of his ties to Trump.

Critics of the ad purchase, including Meijer, said that it provided airtime for a campaign that hadn’t had the money to elevate its name recognition on television in the Grand Rapids market.

Outside groups supplied more than $3 million for backing Meijer and attacking Gibbs.

Principled Leadership for Michigan aired an ad calling Gibbs the Democrats’ “hand-picked candidate for Congress in the Republican primary.”

In Meijer’s Aug. 1 column that appeared on the Substack publication Common Sense, he wrote that it would seem like “the Democrats would look at John Gibbs and see the embodiment of what they say they most fear. That as patriots, they would use every tool at their disposal to defeat him and similar candidates that they’ve said are an existential threat. Instead, they are funding Gibbs.”

Gibbs told The Epoch Times on Aug. 2 that “he [Meijer] is making excuses and finding people to blame for when he loses.”

“Democrats have spent a lot of money attacking me,” he said.

Dave Wasserman, senior House editor of The Cook Political Report, said that his organization’s rating for the 3rd District is moving from toss-up to “leaning Democratic” after Gibbs’s win.

During his victory speech, Gibbs praised the strong grassroots efforts of his supporters.

“The fight ahead will require even more of us [than] before,” he said.

“From here on out, we’re facing a challenge in November with a Democrat. I think it’s going to turn out very favorably for us.”