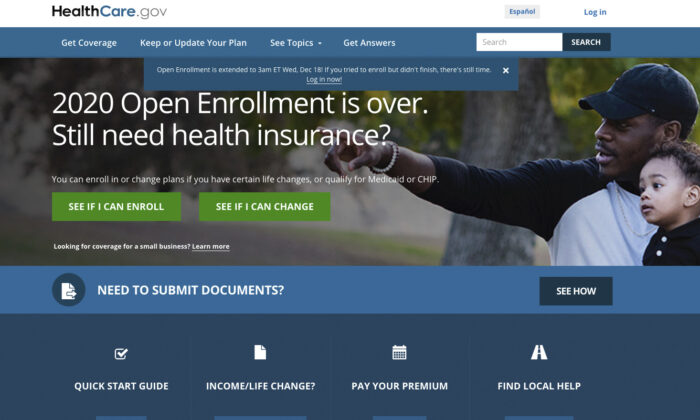 This screengrab from the website HealthCare.gov shows the extended deadline for signing up for health care coverage for 2020. (Centers for Medicare and Medicaid Services via AP)
Viewpoints

Hospitals struggling to treat waves of very sick people now face a new threat: millions of uninsured Americans pounding at their gates. How can the hospitals afford to treat them, even if they have the beds?

The obvious response was for President Donald Trump to open early enrollment in the federal Affordable Care Act marketplace. The 11 states that control their own Obamacare exchanges had already done that (rather than make people wait seven months for the official sign-in period). Insurers, providers and many Republicans expected Trump to take that step.

But surprise: President Donald Trump said he wouldn’t open the ACA marketplace early. Instead, he would order the federal government to directly pay hospitals for care of uninsured novel coronavirus patients.

How true. And how bizarre, given the president’s known hostility toward socialized insurance (apart from the politically untouchable Medicare). On one hand, Trump may be a left-wing socialist commie in disguise. On the other, more likely hand, his single-payer initiative might be just a move in his game plan to erase Obamacare.

After all, opening the ACA exchanges early would have been admitting that Obamacare is needed. And Trump is still urging the U.S. Supreme Court to kill the ACA altogether. Trying to expand Obamacare and kill it at the same time could prove awkward.

Hospitals are not optimistic that Trump will pay them. They have questions: Will the money be taken out of the existing $100 billion fund to help get them through this crisis? If so, how much? Will it cover care for problems related to COVID-19 such as pneumonia? And how long will it take to build a new payment system?

Consider the strangeness of having the feds pick up the hospital bills for the coronavirus but not stage 3 lung cancer. But as Health and Human Services Secretary Alex Azar explains, “What President Trump is doing here with this money is an unprecedented disease-specific support of care.”

Another benefit to hospitals, Azar added, is that the government would reimburse them faster than the insurers. Not exactly a thumbs-up for private coverage.

Obamacare’s exchanges are, of course, the market-oriented approach that conservatives purport to prefer. They let the uninsured choose the level of private coverage they want—with subsidies if they need them. And those who sign up are insured for heart attacks as well as the coronavirus.

More considerations. Millions of Americans have lost both their job and the health coverage that came with it. Some find themselves so poor that they qualify for Medicaid, the joint federal-state program for low-income families.

The ACA enabled states to expand Medicaid coverage somewhat up the income scale, with the federal government picking up about 90 percent of the costs. As of now, 14 Republican-run states have not expanded Medicaid. Thus, many of the newly unemployed in those states will not be eligible for Medicaid coverage. And they will be unable to enroll in the ACA marketplace until November.

Medicaid itself is now under enormous pressure. It’s “absolutely going to be in the eye of the storm,” Joan Alker of Georgetown University told Kaiser Health News. Utah alone has seen a 46 percent increase in Medicaid applications.

It’s pretty clear what Trump is up to. America is in the jaws of a medical crisis, and he can’t let the hospitals collapse. Doing the single-payer thing for the coronavirus could help him survive politically so he can destroy Obamacare.

He may assume that the American people will care less about health coverage by Election Day. I, for one, doubt it.