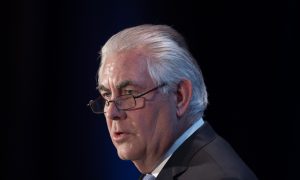 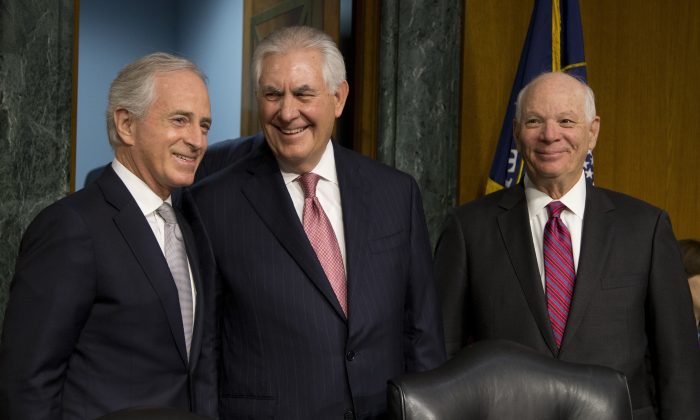 WASHINGTON—Arguing America must reassert its interests, President-elect Donald Trump’s pick for secretary of state, Exxon Mobil CEO Rex Tillerson, tried on Wednesday to allay concerns that a Trump administration will pull back from the world or ignore threats from rivals. He said Russia poses a “danger” to the nation.

Tillerson told the Senate Foreign Relations Committee that he would help usher in a new era of U.S. leadership on the global stage as America’s top diplomat.

Tilllerson said recent Russian actions “disregarded American interests” and alarmed U.S. allies, even if cooperation between Washington and Moscow remained desirable on a range of issues.

He also took aim at the outgoing Obama administration for failing to live up to “good intentions,” withdrawing from critical areas and sending mixed signals to both friends and adversaries.

“China has emerged as an economic power in global trade, and our interactions have been both friendly and adversarial,” he said in remarks prepared for his hearing. “While Russia seeks respect and relevance on the global stage, its recent activities have disregarded American interests. Radical Islam is not a new ideology, but it is hateful, deadly, and an illegitimate expression of the Islamic faith. Adversaries like Iran and North Korea pose grave threats to the world because of their refusal to conform to international norms.”

Despite Tillerson’s broad assessment of threats, Russia was sure to be foremost on senators’ minds.

Several lawmakers have spoken about scrutinizing his and Exxon’s two-decade relationship with Russian President Vladimir Putin and others in Moscow. The claims by U.S. intelligence agencies of Russian alleged hacking in the election, and an unsubstantiated account that Russia had assembled a dossier with salacious charges against Trump, were only likely to reinforce those concerns.

Tillerson, who has a two-decade relationship with Putin and received from him the Order of Friendship in 2013, said the former Cold War adversary “poses a danger” that must be taken seriously.

“We must also be clear-eyed about our relationship with Russia,” Tillerson said in his opening comments. “Russia today poses a danger, but it is not unpredictable in advancing its own interests. It has invaded Ukraine, including the taking of Crimea, and supported Syrian forces that brutally violate the laws of war. Our NATO allies are right to be alarmed at a resurgent Russia.”

His supporters, including former Secretary of State Condoleezza Rice and Defense Secretary Robert Gates, point to Tillerson’s lengthy career as a senior executive in a mammoth multinational company as proof he has the management and negotiating skills to succeed in the State Department’s top post, particularly with tough rivals.

Defenders such as Sen. Ted Cruz, R-Texas, and arms control expert and former Sen. Sam Nunn, D-Ga., said his understanding of Russia is a benefit.

One area in which Trump has called for cooperation with Russia is in counterterrorism. Tillerson said the Obama administration’s counterterrorism approach was unrealistic.

In the Asia-Pacific region, Tillerson pointed to North Korea’s nuclear and missile programs as urgent threats and said that Chinese regime’s “illegal taking of disputed areas” in the South China Sea must be acknowledged and confronted.

Democrats and even some traditional GOP hawks were expected to zero in on Exxon and its subsidiaries’ activities in Iran and Iraq as well as Tillerson’s environmental views and suspicions his focus will be driven by corporate interests, not the nation’s.

As chief of Exxon, Tillerson opposed sanctions championed by both Democrats and Republicans on Russia imposed after its annexation of Ukraine’s Crimean Peninsula in 2014. Exxon ended up losing hundreds of millions of dollars as a result of the economic restrictions.