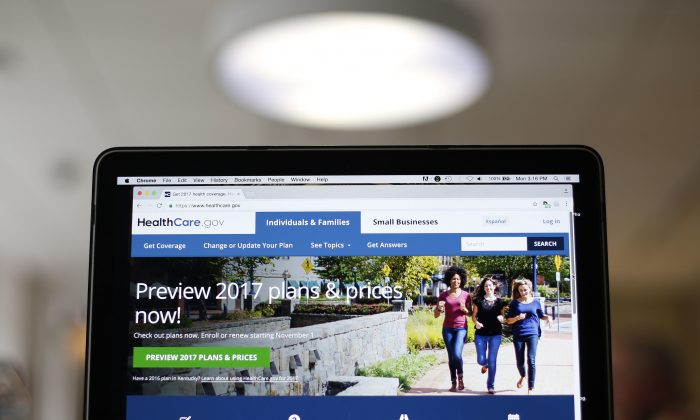 The HealthCare.gov 2017 website home page is seen on a laptop in Washington, in this file photo. (AP Photo/Pablo Martinez Monsivais)
US

WASHINGTON—President-elect Donald Trump says he wants to preserve health insurance coverage even as he pursues repeal of the Obama-era overhaul that provided it to millions of uninsured people.

How his administration handles a pending lawsuit over billions of dollars in insurance subsidies will reveal whether Trump wants an orderly transition to a Republican-designed system or if he’d push “Obamacare” over a cliff. Stripping away the subsidies at issue in the case would put the program into a free-fall.

The question in the House v. Burwell case couldn’t be more technical: whether the Affordable Care Act specifically states in its hundreds of pages that the government can pay money to help reduce out-of-pocket costs for low-income consumers on HealthCare.gov and state insurance markets.

Those subsidies for deductibles and copayments are paid directly to insurers, on top of the law’s tax credits that reduce premiums for consumers. Since the ACA’s basic coverage is fairly skimpy, the cost-sharing subsidies make it work for millions of people when they seek treatment. For example, subsidies can bring a $1,500 hospital copayment down to $100.

House Republicans have taken the Obama administration to court. They argue that the law lacks a specific congressional “appropriation” for the subsidies, estimated to total $9 billion next year. A federal district judge in Washington, D.C., agreed with the House and the case is now on appeal.

The Obama administration has argued that the spending is automatically approved, or “appropriated,” under the law. Otherwise lawmakers would have designed a system that they knew wasn’t viable. More than half of health law customers are currently receiving cost-sharing subsidies.

The White House says the courts are not the place to try to settle funding disputes. The government’s final brief in the case is due on Jan. 19, the day before Trump is to be inaugurated.

Trump Says Only He Knows Finalists For Cabinet

Trump, who has vowed to start taking apart the health care law on the first day of his administration, has a tailor-made opportunity: His administration could simply agree with the House that the payments are unconstitutional, and stop contesting the lawsuit.

“The Trump administration could immediately turn off the tap for making cost-sharing payments,” said Mark Regan, legal director of the Disability Law Center of Alaska in Anchorage, and a defender of the law. “Turning the payments off would come close to destroying the market.”

Insurers could be stuck with massive losses because they would still have a legal obligation to cover patients’ out-of-pocket costs, but would get no reimbursement from the government.

“What Trump should do is on Day 1 say, ‘We are not going to fight that lawsuit—those payments end at the end of calendar year 2017’,” said Michael Cannon, health policy director at the libertarian Cato Institute think tank. Cannon was one of the main proponents of an earlier legal challenge to the law’s premium subsidies in certain states. That case was decided by the Supreme Court in favor of the administration.

A deadline would give consumers and insurers some time to adjust, and help focus Congress on the need to pass legislation to replace the ACA.

But legally that could get complicated. If the Trump administration were to agree with the House that the subsidies are unconstitutional, how could it continue to make any payments at all? Congress would have to provide some sort of stopgap authority.

House Speaker Paul Ryan (R-Wis.) is reviewing the issue. “We are in contact with the Trump transition team as we consider the House’s options,” said spokeswoman AshLee Strong.

Insurers are worried. In a brief filed with the appeals court, they warned of $1,000 premium increases and a market exodus by consumers and insurers. “A seismic shift,” they called it.

Open enrollment for 2017 is underway and a new coverage year starts Jan. 1. Throwing out the old rules at this stage would jeopardize coverage, said David Merritt, a spokesman for the industry group America’s Health Insurance Plans. “Big changes call for thoughtful transitions so that people aren’t harmed,” he said.