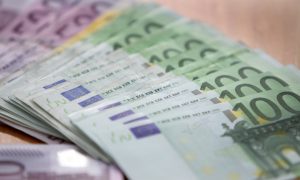 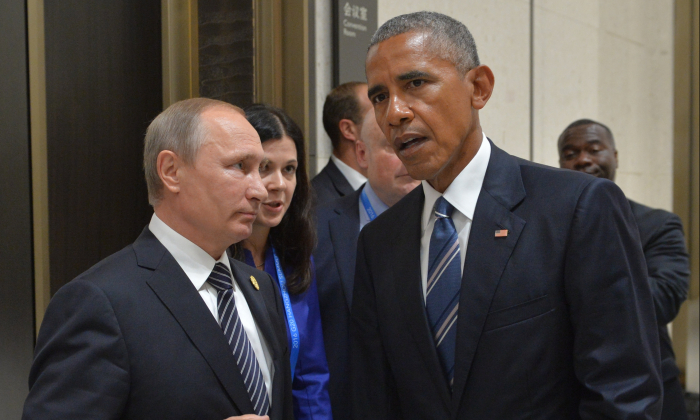 Russian President Vladimir Putin (L) meets with his US counterpart Barack Obama on the sidelines of the G20 Leaders Summit in Hangzhou on September 5, 2016. (Alexei Druzhinin/AFP/Getty Images)
Trump Administration

The video features prominent Democratic lawmakers admitting that President Barack Obama did not do enough to defend against Russia’s interference in the 2016 presidential election.

“President Obama knew Russia was interfering in the 2016 election,” the video’s opening statement says. “But his team just watched it happen.”

Multiple national security officials warned the Obama administration between 2014 and 2016 that Russia was ramping up its operations to disrupt the United State political system, according to Politico. But the FBI under the Obama administration officially began investigating Russia’s efforts in late July 2016, when the bureau launched a counterintelligence probe of the Trump campaign.

Special counsel Robert Mueller took over the FBI’s investigation in May 2017 and concluded it last month. Mueller did not find sufficient evidence to show that anyone on the Trump campaign colluded with Russia.

While Mueller found no evidence of collusion, his investigators moved swiftly to expose and indict a group of Russians involved in two separate efforts by Moscow to illicitly interfere in the 2016 election.

Attorney General William Barr suggested in testimony to lawmakers on May 1 that if Obama’s FBI had moved as quickly as Mueller did to investigate Russia’s meddling, Moscow’s efforts would have been thwarted much earlier.

“The Russians have been at this for a long time in various different ways,” Barr said, adding that he was struck by how quickly Mueller moved to expose and indict the Russians.

“I was thinking to myself if that had been done starting at the beginning of 2016, we would have been a lot further along,” Barr said.

Russia’s efforts to infiltrate the United States date back decades to the time of the Soviet Union. Mueller’s report states that the specific 2016 election interference effort started as early as in 2014.

The video posted on Trump’s official YouTube channel alleges that the stand-down order was given “all to protect their disastrous Iran deal.” Russia was one of the seven nations including the United States to sign on to the Iran nuclear deal. Obama considered the deal a key foreign policy achievement. Trump pulled the United States out of the deal last year.

The video also points out that Obama told Putin at a meeting in China in September 2016 to “cut it out” after Russia was identified as the culprit behind the hacking of the Democratic National Committee server. Trump’s video charges that the warning was insufficient.

“Why didn’t President Obama do something about Russia in September (before November Election) when told by the FBI? He did NOTHING, and had no intention of doing anything!” Trump wrote on Twitter on May 1.

The president made a similar suggestion last month.

“Anything the Russians did concerning the 2016 Election was done while Obama was president. He was told about it and did nothing! Most importantly, the vote was not affected,” Trump wrote on Twitter on April 18.

The president’s repeat statements on the matter suggest he may be aware of evidence that is not yet public. Text messages between former senior FBI officials Lisa Page and Peter Strzok suggest that Obama’s White House may have been closely involved in the investigation of the Trump campaign.

On Aug. 5, 2016, days after the FBI launched the Trump-campaign probe, Strzok texted Page that “the White House is running this.” On Sept. 2, 2016,  Page wrote, “POTUS wants to know everything we’re doing.” POTUS is an acronym for president of the United States.