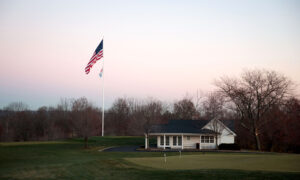 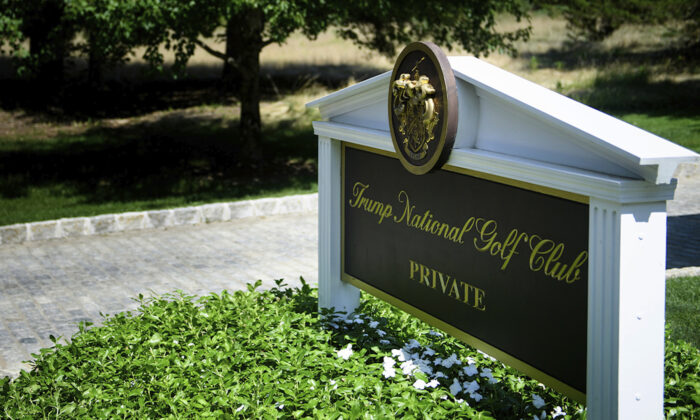 A sign is seen at an entrance to the Trump National Golf Club in Bedminster, New Jersey on Aug. 9, 2018. (Brendan Smialowski/AFP/Getty Images)
Crime and Incidents

A golf club in New Jersey that is owned by Donald Trump has agreed to pay a fine related to a fatal car accident that happened in 2015 when a guest who was under the influence of alcohol crashed his vehicle after visiting the club.

The Trump National Golf Club Colts Neck on Wednesday settled the agreement with the state’s Division of Alcoholic Beverage Control to pay $400,000, according to NJ.com.

In addition, the club will be restricted to selling alcohol to its guests through cart service until Dec. 31 and will need to provide service training to employees by a nationally recognized organization.

The order was authored by New Jersey Attorney General Gurbir Grewal, who said the club broke several rules on Aug. 30 by serving an alcoholic liquor that was not a beer in carts on the golf courts to someone “actually or apparently” intoxicated, Politico reported.

That person was Andrew Halder of Bergen County, who was driving his car while under the influence of alcohol around 3 p.m. that day shortly after leaving the golf club and later crashed the vehicle after hitting a curb on a ramp.

His father, Gary Halder, was seated in the passenger’s side of the vehicle at the time of the crash. He was ejected from the car as it flipped over and hit the curb. He died at a hospital after the accident.

The settlement comes as the former president announced a “major” class-action lawsuit against Twitter, Facebook, and Google on Wednesday.

Speaking from his property in Bedminster, New Jersey, Trump and his team said the lawsuits are about protecting the First Amendment right to free speech. They argued that his rights were denied when the three big tech companies banned him.

Trump described the “major” lawsuits as a “very beautiful development” to protect free speech in the United States. The suits will be filed U.S. District Court in the Southern District of Florida and will ask a judge to order an immediate halt to social media companies’ alleged shadowbanning, censoring, blacklisting, and canceling of people who express political viewpoints outside the mainstream.

Twitter, Facebook, and Google said in January they banned Trump over his claims that the Nov. 3 election was stolen and alleged he contributed to the Jan. 6 violence. Facebook CEO Mark Zuckerberg, Google CEO Sundar Pichai, and Twitter CEO Jack Dorsey were named in the lawsuits—as well as the companies themselves. Trump said the lawsuits will try to compel the court to award him punitive damages over the suspension.