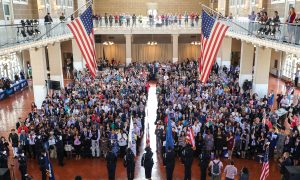 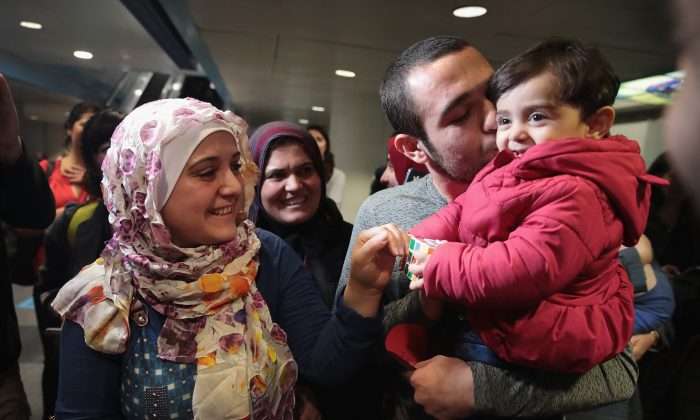 Syrian refugee Baraa Haj Khalaf (L) and her daughter Shams (R) are greeted by her brother Mohamad and mother Fattuom after arriving at O'Hare Airport in Chicago, Ill. on Feb. 7, 2017. (Scott Olson/Getty Images)
US

A much quieter response greeted President Donald Trump’s narrower version of the temporary travel and refugee ban that stirred controversy and lawsuits six weeks ago. However, legal challenges are still expected.

Iraq was taken off the suspended list, as were green card holders and current visa holders, and there was no mention of religion.

A period of 10 days was given for the rollout, mitigating the chaos and protests surrounding the first executive order on Jan. 27.

During the announcement on March 6, Homeland Security Secretary John Kelly said that “Americans are not invulnerable to terrorist threats, and that our enemies will exploit our freedoms and generosity to harm us.”

“We cannot risk the prospect of malevolent actors using our immigration system to take American lives,” he said.

For 90 days, new visas will not be issued to nationals and citizens of Sudan, Syria, Iran, Libya, Somalia, and Yemen.

Any national or citizen from one of those six countries who is without a valid visa and outside the United States on March 16 at 12:01 a.m. EST is not eligible to travel to the United States.

An estimated 15,800 fewer visas—a 25 percent decrease—will be issued to the six countries affected by the 90-day travel ban (based on fiscal 2015 numbers).

Individuals who already have valid visas or travel documents for the United States are exempt from the executive order.

The FBI is investigating about 300 refugees in the United States for links to terrorism.

Iraq has been taken off the suspension list. “Iraq’s commitment to combat ISIS [justifies] different treatment,” a Department of Homeland Security (DHS) Q&A form states. “But visa applications and applications for admission to the United States by Iraqi nationals will be subjected to additional scrutiny to determine if they have connections with ISIS or other terrorist organizations.”

“The United States has the world’s most generous immigration system, yet it has been repeatedly exploited by terrorists and other malicious actors who seek to do us harm,” a DHS fact sheet released on March 6 states.

In the first 20 days of the suspension, DHS will conduct a review of the identity and security information each country in the world provides to the U.S. government. Countries will then have 50 days to comply with requests to update or improve the quality of the information they provide.

Trump reiterated his case on immigration in his first speech to a special joint session of Congress on Feb. 28.

“It is not compassionate, but reckless, to allow uncontrolled entry from places where proper vetting cannot occur,” Trump said. “Those given the high honor of admission to the United States should support this country and love its people and its values.”

Under the Immigration and Nationality Act, Congress gives the president the authority to suspend the entry of any class of aliens the president deems detrimental to the national interest.

The 120-day Refugee Admissions Program suspension applies to all refugee applicants who have not already been formally scheduled for transit by the State Department. Refugees from Syria are not banned indefinitely, a turnaround from Trump’s original Jan. 27 executive order.

During the 120-day period, some individuals may be admitted on a case-by-case basis.

At the same time, the DHS and interagency partners will review screening procedures to ensure refugees admitted in the future do not pose a security risk to the United States.

The FBI has reported that approximately 300 persons who entered the United States as refugees are currently the subjects of counterterrorism investigations, according to the DHS.

Refugee admissions to the United States have been capped at 50,000 for fiscal year 2017.

The total number of refugees accepted into the Unites States in fiscal 2015 was 69,920, according to DHS. Of that number, 15,243 were admitted from five of the six countries (DHS does not include the number for Libya).

The United States first created a refugee classification in 1946. After that, many different refugee programs were enacted on an ad hoc basis, including the Displaced Persons Act, and the Cuban Adjustment and Indochinese Refugee Adjustment acts.

Since 1957, most refugee admissions have been granted refugee status and later given lawful permanent resident status, or if the limit has been reached, the attorney general has had the authority to parole more refugees in, according to DHS.

Asylum status is granted to people who are already in the United States or seeking admission at a port of entry. An asylee must also meet the definition of refugee. An individual may apply for asylum in the United States regardless of their country of origin or current immigration status.

The executive order also instructs the secretary of state to review all nonimmigrant visa reciprocity agreements.

The Department of State will also require more in-person interviews for visas.

Every six months, the DHS will publish information regarding the number of foreign nationals who have been charged with or convicted of terrorism-related offenses while in the United States, or removed from the United States based on terrorism-related activity or any other national-security reasons. The department will also release information regarding the number and types of acts of gender-based violence against women, including so-called “honor killings,” in the United States by foreign nationals.