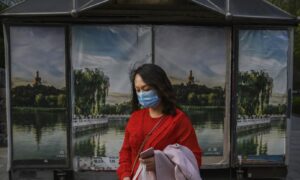 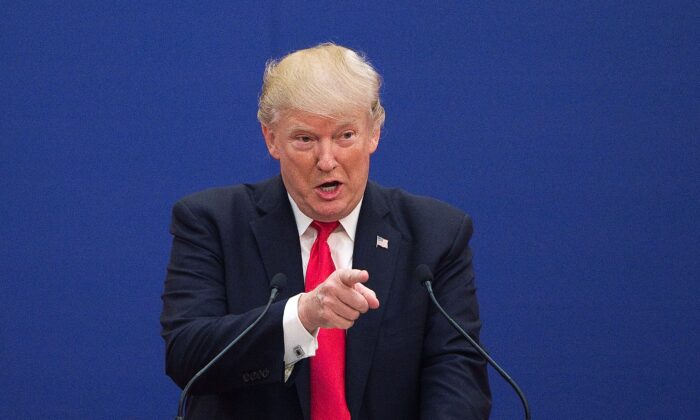 President Donald Trump speaks inside the Great Hall of the People in Beijing on Nov. 9, 2017. (Nicolas Asfouri/AFP via Getty Images)
Viewpoints

After Beijing passed a national security law on May 28 that will take away Hong Kong’s freedom, President Donald Trump delivered a speech in response the following day, showing the White House is finally taking the right approach to China.

First, the United States is terminating its relationship with the World Health Organization (WHO). The U.N. agency has followed Beijing’s directions throughout the entire course of the development of the coronavirus, from failing to alert the world of the outbreak in Wuhan, to praising the work of the Chinese Communist Party (CCP) and holding it up as a model, to changing the disease’s name to COVID-19 to eliminate a word related to China, to finally refusing to reform. In terminating the relationship with WHO, Trump is sending a warning to all the other world organizations the CCP has infiltrated.

Second, the United States is revoking the visas of certain Chinese students who come from military research centers and military universities. The CCP has sent its military staff and officials to the United States to get the best training, disguised as ordinary students or exchange scholars.

In China, there is no boundary between military and civilian use in technology or in companies. Whatever the CCP wants to use, it uses. It claims the ownership of everything and everyone in China. The United States has finally learned this fact. This is an important step toward stemming the loss of intellectual property, especially that related to national security.

Third, the United States is going to require transparency of Chinese companies listed on U.S. stock exchanges, holding them to the same standards as U.S. companies.

It is an open secret in China that Chinese companies, including some bankrupt state-owned companies, created glossy reports to get on Wall Street. Chinese use the saying “scoop up money on Wall Street.” And they refuse to make their books transparent like other companies whose stocks are sold on U.S. exchanges. It’s amazing they were allowed to get away with it for so long, with so many American people investing in poorly operated companies and many military companies. We are paying our taxes to build the U.S. military, while at the same time investing in the CCP’s military, which has a clear goal of beating the United States.

Lastly, Trump is going to revoke the free trade status of Hong Kong since the CCP is taking away the city’s last bit of freedom. The CCP has used Hong Kong as a window to get dollars and high tech from the West, and the United States has lost a lot to this “white glove”—the respectable front that enables the CCP’s machinations. This is the right time to terminate this loophole that gives the CCP free access to finance and technology in the United States.

With these moves, the Trump administration is taking serious steps to protect the wealth and technology of our country. And the approach is finally right—decoupling!

There is at least one important piece missing, though. The United States should not allow Chinese social media tools such as WeChat and TikTok in the United States. This would establish reciprocity, since the CCP won’t allow American social media in China.

There is a large group of Chinese active on social media in the United States. They attack Trump, pretend to be leftist Americans, and enjoy exercising free speech. This approach successfully influenced a critical election for the mayor of Kaohsiung in Taiwan in 2018. It aims to influence elections here in the United States and takes every opportunity to attack American values.

For the past few years, Trump has been trying to get a good trade deal with China. This is a real waste of time.

When a free country deals with a communist regime, there is no way to get a win-win situation. Robert Lighthizer did a great job for President Ronald Reagan when the United States was having a trade war with Japan. But Japan is a humane society.

This negotiation with the CCP is very different, and so much harder. With a communist regime, we are dealing with a devil. That is why all negotiations will be a waste of time. Trump wants to fight like a gentleman, a smart gentleman. To negotiate with an evil regime, a devil, a human mindset can not win. The only way out is to decouple.

The CCP has always eyed the United States as its No. 1 enemy. Its strategy is to weaken the United States, ruin it, and then destroy it. Communists see the values of the free world as the biggest threat. Unfortunately, the CCP has been quite effective in reaching its goal.

George Floyd’s arrest was reportedly triggered by his trying to use a counterfeit $20 bill in a store. Where did this bill come from? Let’s hope to see the results of an investigation soon. According to a report by USA Today on Jan. 28, U.S. Customs and Border Protection officials confiscated 45 boxes of counterfeit cash worth $900,000—”all of it in singles.”

“The dollar bills were discovered in December at the International Falls Port of Entry in Minnesota in a rail shipment originating from China,” the report said.

Counterfeiting a $1 bill has low economic value unless it is part of a national strategy. In a strictly controlled society like China, it is not possible to print U.S. currency or produce and export drugs—such as fentanyl—without involvement at the top.

The book “Unrestricted Warfare,” written by two colonels in the People’s Liberation Army, charts unconventional strategies for the Chinese regime to use in defeating the United States. It is not just a book, but a blueprint.

The United States, as the leader of the free world, has the responsibility to counter the communist regime, to protect freedom in this world. As the United States defends freedom in the world, it is also fighting for the freedom of Chinese people—just as Americans stand with the people of Hong Kong.

As a Chinese American, I am glad the United States has finally picked the right fight: taking on the biggest threat to freedom—communism. I hope more Americans can see the historical responsibility of our country. I hope that one day soon my family members and friends can breathe the air of freedom in China, as we do here.