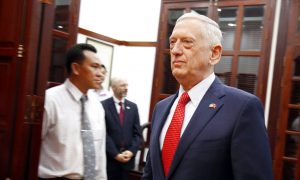 President Donald Trump will announce at the Pentagon on Jan. 17 an ambitious new missile defense strategy that will aim to develop space-based sensors to detect enemy missiles and Star-Wars style orbital weaponry to shoot them down.

“Space, I think, is the key to the next step of missile defense,” a senior Trump administration official told reporters in a background call previewing the president’s announcement. “A space-based layer of sensors is something we are looking at to help get early warning and tracking and discrimination of missiles when they are launched.”

The space-based aspects of the missile defense systems are currently only being studied, the official said.

The investments come on top of previously announced U.S. plans to increase the number of ground-based interceptors over the next several years, hiking the number positioned at Fort Greely, Alaska, to 64 from 44.

The space aspects of the missile defense strategy align with Trump’s push to catch up with America’s adversaries in space. Russia and China have both developed advanced systems that can disable satellites.

The Pentagon warned in a report earlier this week that China’s military was “on the verge of fielding some of the most modern weapon systems in the world.”

“China is building a robust, lethal force with capabilities spanning the air, maritime, space, and information domains, which will enable China to impose its will in the region,” the report said.

The U.S. missile defense system is primarily meant to counter threats from foreign powers with small nuclear arsenals, including North Korea, according to military officials. The United States relies on its nuclear arsenal to deter an attack by nuclear superpowers like China and Russia.

Trump is set to deliver his speech as North Korean officials are en route to the United States to potentially discuss a second summit with Kim Jong Un, according to South Korean media. The two leaders met in Singapore last year. North Korea has not conducted any missile or nuclear bomb tests since then.

It is unclear to what extent the report would single out North Korea. The senior Trump administration official suggested it would at least be mentioned.