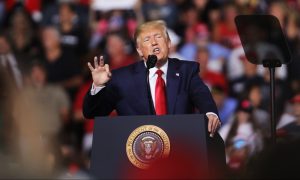 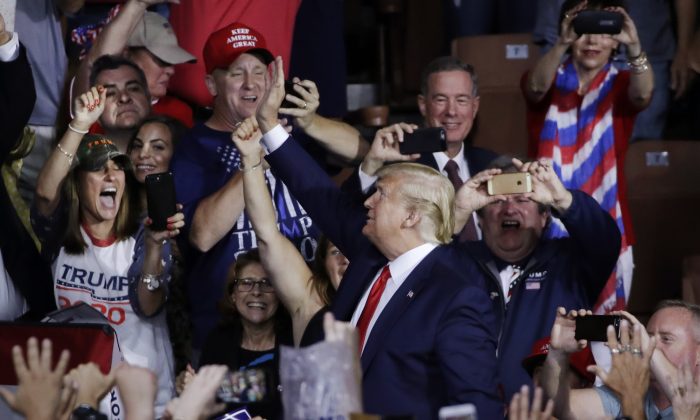 While some expressed doubt about the claim, Manchester Deputy Fire Marshal Mitchell Cady told the Daily Mail that Trump was right.

Cady said the crowd on Thursday numbered “just over 11,500.”

The scene inside the SNHU Arena in Manchester about half an hour before President Trump’s “Keep America Great” rally is set to begin. pic.twitter.com/cw3HuUO913

If anything, the crowd size figure for Trump’s rally was low, Cady said. “Had some more snuck in during the period when we’re trying to assess the situation and get the door closed, when we’re trying to get everyone through the mags [magnetometers], then maybe it’s 11,500-plus,” he noted.

Another 8,000-plus people stood outside Trump’s rally, watching the president’s famous freewheeling on jumbo television screens.

The estimate came from himself and two deputies noting the boundaries of the crowd and measuring that space on Friday morning.

“Based on the calculations we use for crowd load, we came to either 8 or 9 [thousand],” he said.

Some critics used pictures showing empty nosebleed seats to claim Trump struggled to fill the SNHU Arena but an official there said that the empty seats were offset “by all the people cramming themselves into the standing-room space on the arena floor.”

“The Trump people wanted the fire marshal to let more people in, and at some point they said no,” the official told the Mail. “But there were tons and tons more outside. It’s not like they couldn’t fill the place.”

New York Times columnist Gail Collins suggested this week that media organizations should start rumors about the size of the crowds Trump is drawing, claiming it would “shock him into reality.” She admitted, however, it wouldn’t be “responsible journalism.”

Trump’s lawyer Rudy Giuliani took to Twitter after the New Hampshire rally to praise Trump, saying he hadn’t been to a Trump rally since the 2016 campaign and called them “masterful performances.”

Overflow outside the @realdonaldtrump rally in Manchester, NH tonight pic.twitter.com/cIzptok3a3

This is a tour de force which is equivalent to Reagan and Clinton but has much bigger audiences and he excites them much more. He is one of our great campaigners which is how he defeats a hostile media.They don’t get it. pic.twitter.com/BRXLg71L6o

“This is a tour de force which is equivalent to Reagan and Clinton but has much bigger audiences and he excites them much more. He is one of our great campaigners which is how he defeats a hostile media. They don’t get it,” he added.

Trump at the rally railed against the Democratic presidential candidates, calling them “a bunch of socialists or communists,” and touched on the booming economy, immigration, and healthcare.

“Every major democrat running for president supports a massive government takeover of healthcare that would raid medicare and destroy the private health insurance plans of millions of American families, that they love,” Trump noted at one point.

The rally in New Hampshire came after Trump drew around 17,000 people to a rally in Cincinnati, Ohio.