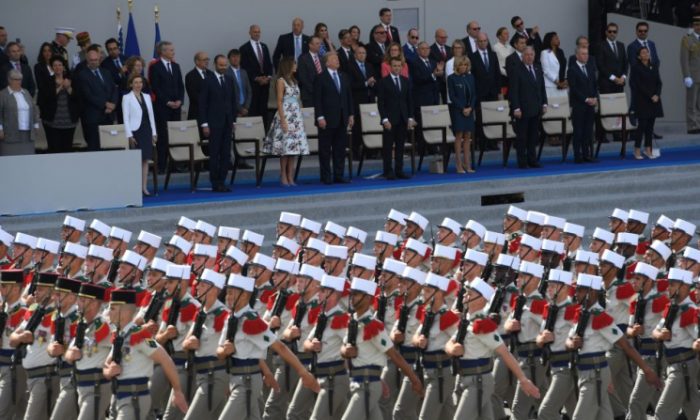 The military parade requested by President Donald Trump will take place on Veterans Day in Washington this year, according to the Pentagon.

The parade will be capped off by a “heavy air component,” which may include older aircraft. There won’t be any tanks in consideration of Washington’s roadways, but the plan calls for wheeled military vehicles to roll through the streets.

“This parade will focus on the contributions of our Veterans throughout the history of the U.S. Military, starting from the Revolutionary War and the War of 1812 to today, with an emphasis on the price of freedom,” Executive Secretary Hallock Mohler Jr. wrote in a memo to the Joint Chiefs of Staff obtained by NPR.

The route will start at the White House and finish at the Capitol. The preliminary plan calls for Trump to be surrounded by Medal of Honor recipients and veterans in a viewing area.

The organizers call for the parade to display the changing role of women in the military, “from separate formations in World War II to today’s integrated formations.” The organizers also call for veterans to wear different periods’ uniforms and perform reenactments.

The parade will be merged with the existing Veteran’s Day Parade.

The Joint Staff will be responsible for planning, while the Northern Command will carry out the execution.

Trump was inspired by the Bastille Day Parade in France and called on the Pentagon to come up with an American parade.

“We’ll see if we can do it at a reasonable cost, and if we can’t, we won’t do it. But the generals would love to do it, I can tell you, and so would I,” Trump told Fox News in February. “I think it’s great for our country in terms of being a cheerleader and the spirit.”