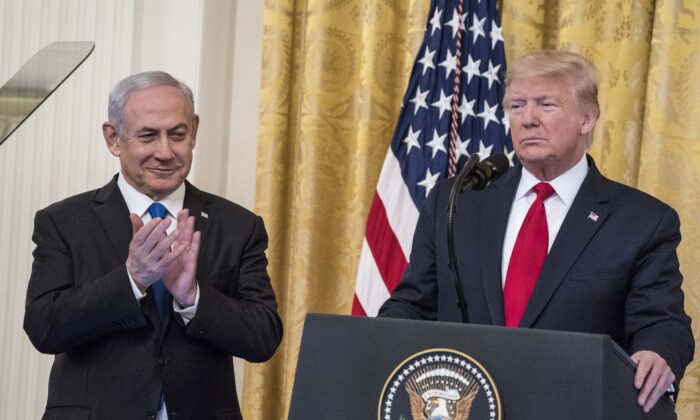 As I wrote in a recent column, Trump’s foreign policy initiatives, especially when it comes to the Middle East, stand in stark contrast to those of his predecessor.

Whether it was the Obama administration’s refusal to support the Green Revolution in Iran, the erasing of Obama’s red line in Syria, the welcoming of Russians into Syria while doing nothing to get the Iranians out, or support for the ouster of Mubarak in Egypt, which, in turn, led to the rise of the Muslim Brotherhood, they left many messes for the Trump administration to fix.

A big reason why I believe Barack Obama failed is that he insisted on having an echo chamber around himself at all times. It can’t be stressed often enough that in 2014, Obama fired the only intelligence agency head who wouldn’t parrot back all the fake happy talk he wanted to hear about ISIS, Iraq, and Afghanistan. That person was now-retired Lt. Gen. Michael Flynn, the director of the Defense Intelligence Agency at the time.

While Director of National Intelligence James Clapper and CIA Director John Brennan were only too happy to tell Obama what he wanted to hear, Flynn was given the boot for daring to tell Obama the one thing he didn’t want from people working for him: the truth.

After being fired by Obama, Flynn found a receptive audience for his foreign policy truth-telling in Donald Trump, and joined the real estate magnate’s presidential campaign in 2015.

So it’s not much of a mystery why, in looking back, Obama made so many disastrous foreign policy missteps. He made it crystal clear what he wanted to hear back from others and wasn’t shy about very publicly punishing those who wouldn’t play along with him.

“Obama, who supposedly governed without drama, delivered the worst recovery since 1949. On the economy and on foreign policy, he signed costly legislation and pushed counterproductive policies. Do Americans want a president who ultimately does the right thing or a president who racks up style points while making one blunder after another?”

Iran is the clearest example of where the current president’s foreign policy is the exact opposite of his predecessor’s.

Politico ran a stunning investigative report in December of 2017 that detailed at length how the Obama administration, as a matter of policy, caused law enforcement and intelligence agencies to back off investigations into Iran’s drug, arms, and human trafficking trades, many of these illegal networks being run by the terrorist group Hezbollah.

The lead for the article sounds incredible: An ambitious U.S. task force targeting Hezbollah’s billion-dollar criminal enterprise ran headlong into the White House’s desire for a nuclear deal with Iran.

But journalist Josh Meyer lays out a compelling case that the Iran Deal mattered so much to Obama that this was the result. After Obama pointedly rebuffed the Green Revolution, it wasn’t surprising to learn he’d also stand back and allow the mullahs to continue running their world-wide crime networks.

Far from backing off from or even facilitating the Iranian regime’s international terror, arms, drug, and human trafficking networks all over the world as Obama did, Trump has been clamping down and cutting off one insidious tentacle at a time.

Trump withdrew from the disastrous Iran Deal, which was supposed to be Obama’s historic legacy, and then imposed harsh new sanctions.

One of the most sinister of Tehran’s tentacles was cut off Jan. 2, when Trump gave the order for a drone strike on Iranian Gen. Qassem Soleimani, the head of the Quds Force.

The mullahs are putting on a brave face and swearing the new No. 2 guy is as dangerous as the man he’s replacing, but don’t believe a word of it.

Soleimani was irreplaceable. For more than 25 years, he was the guy making it all go, the hands-on conductor of an orchestra of mayhem and violent death made up of more than a dozen terror groups and militias spread out over several continents, each producing filthy lucre for the masterminds in Tehran through one criminal enterprise or another.

When the mullahs are taken down by their own people, Trump will stick to the supporting role the United States now plays in the region: he’ll help in the transition to what comes next for the Iranian people, assisting where he’s asked to, and he’ll go no further than that.

And that’s how it should be.