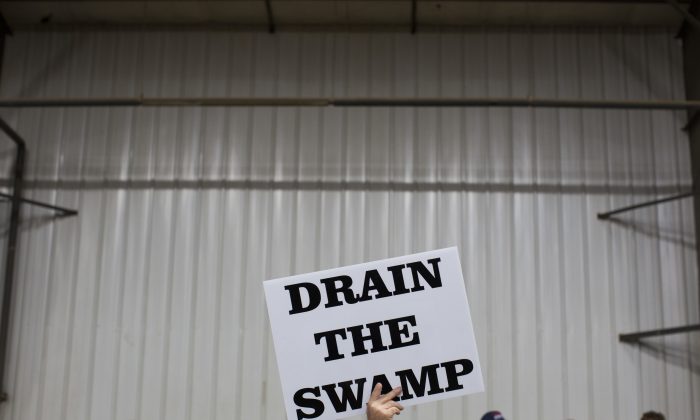 WASHINGTON—President-elect Donald Trump’s campaign promise to “drain the swamp” of Washington might make it difficult for him to fill all the jobs in his administration.

Trump’s ethics plan would ban all executive-branch officials from lobbying for five years after leaving their government jobs—one of several policies aimed at curbing the influence of lobbyists. His campaign released his plan about three weeks before Election Day, and “drain the swamp” quickly became a favorite rallying cry and social media hashtag.

Lobbyists, many of whom are massed along the K Street corridor downtown just blocks from the White House, see the plan as misguided and argue that it could backfire on him. The incoming Republican president is racing to hire some 4,000 executive-branch employees, and his ethics plan could cause some job-seekers to look elsewhere because it limits how they can earn a living when they decide to leave the administration.

“This will have a chilling effect on his hiring, no doubt,” said Paul Miller, who leads the National Institute for Lobbying and Ethics. “Most people who agree to government service want to go back into the private sector. We don’t want career politicians, and that’s what he could end up with.”

But to those who have long advocated for breaking the “Potomac fever” that befalls those who come to Washington and never leave, Trump’s ban is worth the risk of losing some potential administration employees.

“Too many people go into government service as a way to punch their ticket and come out and make millions of dollars. That’s both a concern and a reality,” said Meredith McGehee, an executive at the government reform group Issue One. “Is there a cost to someone who goes into government service? The answer is yes. Are there lots of other things that person can do? Absolutely. Do policy. Go back home.”

She praised Trump’s pledge. Yet the devil is in the details, and the follow-through, said McGehee, who has worked on transparency and disclosure issues for three decades.

Trump’s plan makes bold assertions, some more doable than others.

Trump Says Only He Knows Finalists For Cabinet

He can enforce his executive-branch lobbying ban with the stroke of his pen, but measures involving Congress are trickier. Trump says he will ask Congress to institute a five-year lobbying ban for members and staff, which would take the approval of senators and representatives, who might be squeamish about tamping down their own future employment options.

Trump also wants to “expand the definition of lobbyist so we close all the loopholes that former government officials use by labeling themselves consultants and advisers when we all know they are lobbyists.”

That’s reasonable, McGehee said, but difficult. Increasingly, those employed by the influence industry call themselves “government relations strategists.” In fact, the number of registered lobbyists in Washington has dropped to fewer than 10,000 from 15,000 a decade ago. These “lobbyists” haven’t gone anywhere, McGehee said; they’re just calling themselves something else.

Miller and other lobbying advocates also agree registration should be more expansive.

Yet the 2011 legislation to do just that hasn’t moved forward. That could be a heavy lift for Trump. If it’s too onerous, he could pare back his goals and include a more expansive lobbying definition that would only apply to the administration.

It’s also unclear how many of the 4,000 or so people Trump is about to hire would be subject to his ban. His proposal says “all executive-branch officials,” but in practice he may be referring only to Cabinet members and high-level White House officials. Trump’s transition team did not respond to questions about his ethics plan.

Philippine President Wants to Be Friends With Trump, Putin

Washington insiders are getting mixed signals from Trump.

His original transition team was packed with lobbyists and interest advocates, and that group is charged with helping to find, vet, and hire for the Trump administration. In recent days, Trump put Vice President-elect Mike Pence in charge of transition, and he is changing some of the people who are involved.

Trump said he has no choice but to rely on lobbyists as he forms his government—but he argued he would try to change the dynamic over time.

“Everybody that works for government, they then leave government and they become a lobbyist, essentially. I mean, the whole place is one big lobbyist,” Trump said in a “60 Minutes” interview that aired Sunday. “We’re going to phase that out. You have to phase it out.”

His White House predecessors have made similar promises.

On the campaign trail in 2007, Barack Obama frequently condemned the “revolving door” of Washington in terms strikingly similar to Trump.

Obama made bold promises before his first election yet didn’t do much to curb the influence of lobbyists. Still, he won re-election after a second campaign that included almost no talk about the revolving door.

“Drain the swamp. Stop the revolving door. These are great things to say to get elected,” said Howard Marlowe, president of Warwick Group Consultants, and a longtime advocate for fellow lobbyists. “After you get elected, you find a way to quietly push it aside.”