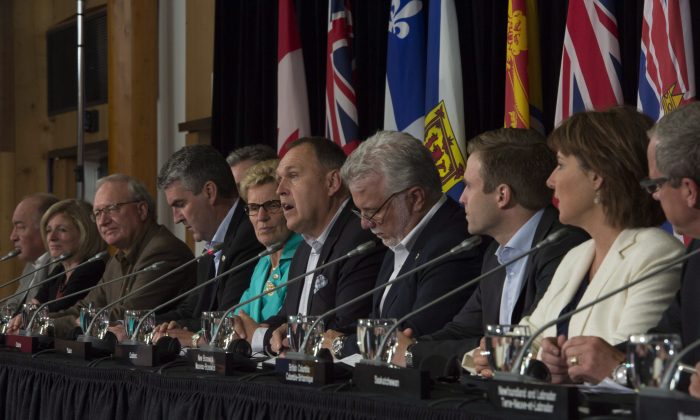 Canada’s premiers are seen during the closing news conference following a meeting in Whitehorse, Yukon, to discuss creation of a Canadian free-trade agreement between provincial and territorial jurisdictions, on July 22, 2016. (THE CANADIAN PRESS/Jonathan Hayward)
Canada

Trump’s Isolationism May Spur Canadians to Pull Together

There is a view that the election of Donald Trump will mean Canada becomes “roadkill” in the new U.S. president’s campaign to build jobs in the United States.

“Trump’s political goal is to deliver jobs to Americans. … He’s not targeting Canadians, but, nonetheless, we’re going to be roadkill,” was the chilling assessment from Ian Lee, associate professor at the Carleton University Sprott School of Business.

However, an unintended consequence of a Trump presidency could well be the rebirth of Canada as a nation.

It’s possible that Donald Trump will be more cautious as president than he was as a candidate. Nevertheless, his promise to deal with unfair Chinese trade practices, veto the Trans-Pacific Partnership (TPP) agreement, and renegotiate the North American Free Trade Agreement (NAFTA) would radically alter the global economy. Even the threat has altered the global economic agenda; nationalism and protectionism are on the rise.

These developments should be a wake-up call for Canadians, for we have been sleepwalking into an over-dependency on the United States. It is coming back to haunt us.

An unintended consequence of a Trump presidency could well be the rebirth of Canada as a nation.

The NAFTA agreement created a free trade zone for Canada, the United States, and Mexico. It morphed out of the previously negotiated Canada-U.S. Free Trade Agreement signed in the 1980s. The original deal was very controversial in Canada, to say the least. The 1988 election in Canada was fought almost entirely on the issue, and although Brian Mulroney’s Progressive Conservatives formed the government, a majority of Canadians voted against free trade with the United States.

Canadian nationalists lost that round, and the consequences were profound. Today, almost three-quarters of Canada’s trade are with one country—the United States. Daily trade in goods between the two nations is, on average, in the range of $1.5 to $2 billion. We have been each other’s biggest trading partners for decades. The cross-border total for 2015 was approximately $280 billion, down from $312 billion in 2014.

A Trump presidency could force a major rethink of how Canada works. Currently, provinces in Canada operate like independent fiefdoms; many have erected irrational, impenetrable restrictions to cross-Canada trade. NAFTA has made north-south trade easier, while inhibiting the evolution of an integrated Canadian economy.

Even worse, the relative success of NAFTA has unravelled many of the ties that bind Canadians and inhibited the development of a national strategy.

The relative success of NAFTA has unravelled many of the ties that bind Canadians and inhibited the development of a national strategy.

Achieving an internal Canadian free trade agreement would demand a level of Canadian compromise that has not been seen for decades. It would require Canadians to face down some hard realities, such as the Franco-Anglo linguistic divide, simmering western estrangement, Atlantic Canadian cultural partialities, and the historic grievances of indigenous peoples in Canada.

To rise above our latent particularism, Canadians need a vision of the future that would be worth all the pain and effort. And that means thinking big, imagining a Canada of tomorrow that is proud and self-sufficient. It means building a nation that is united, tolerant, responsible, and very much bigger than the Canada of today.

Imagine a Canada of the mid-21st century that is 100 million strong, where a second bilingual, multi-ethnic Canada has been constructed in the mid-zone, the warming heartland that lies north of the present Canadian population.

Such a nation would be economically self-sufficient, with internal markets big enough to support our domestic manufacturing, our growing agricultural producers, and our domestic energy industry, and provide a place for the many currently isolated indigenous communities, lifting them out of poverty and despair.

It would be ironic if Donald Trump were the author of a new, united, and independent Canada.

Of course, this new Canada would necessarily interface with the world, and it would need to develop global trading expertise and the infrastructure to accomplish that goal. But breaking free of our over-dependency on the United States is perhaps the first step in achieving that goal.

Over the past 30 years, Canadian nationalism has been on hold, over-ridden by internal conflicts and the promise of continental integration. It would be ironic if Donald Trump were the author of a new, united, and independent Canada.