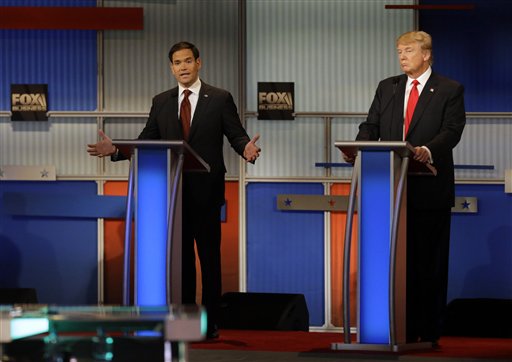 Trump repeated his plan to build a border wall at the U.S.-Mexico border. Asked whether he’d deport the millions of people in the country illegally, he said: “We have no choice.”

“We either have a country or we don’t have a country,” Trump said, adding that some of those deported could return.  He cited President Dwight Eisenhower’s approach at deporting illegal immigrants in the 1950s. “You don’t get nicer; you don’t get friendlier,” he said.

“Come on, folks, we know you can’t pick them up and ship them across the border. It’s a silly argument. It’s not an adult argument,” he added, though he did note the families should pay a penalty if here illegally, but are otherwise law-abiding.

Trump responded to Kasich, saying: “I’ve built companies that are worth billions and billions. I don’t have to hear from this man, believe me.”

But Jeb Bush took the opportunity to jump in and back up Kasich, saying Trump’s plan would “tear communities apart.”

“Sending 11 million people back is not possible and it’s not embracing American values,” Bush said. “They’re doing high-fives in the Clinton campaign right now when they hear this.”

Many of the other candidates, including Ben Carson, stayed out of the exchange on immigration.