Trump’s Hawkish Stance on China Turns Into a Reelection Pitch 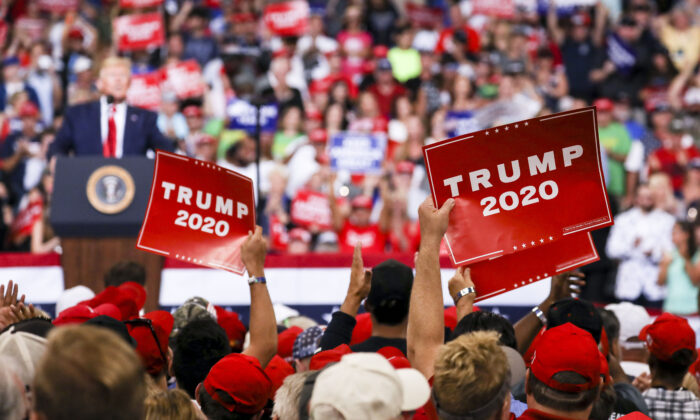 WASHINGTON—President Donald Trump’s harder stance on China may become one of his biggest strengths in the general election amid a growing consensus that something must be done to hold Beijing accountable for the worldwide pandemic.

Public opinion in the United States has shifted significantly against the Chinese regime in recent weeks, and this is creating a “big vulnerability” for former Vice President Joe Biden, says Libby Cantrill, managing director and head of public policy at PIMCO, an investment management firm.

Speaking at a virtual panel discussion on the U.S. election outlook hosted by the Institute of International Finance on April 16, Cantrill said that “Trump and Democrats on the Hill are strange bedfellows” in terms of skepticism about Beijing.

As vice president and almost four decades as a U.S. senator, Biden, however, had been friendly toward free trade and China, she said.

Trump has made confronting China’s trade-distorting policies a centerpiece of his agenda, recently increasing pressure on Beijing for its handling of the Chinese Communist Party (CCP) virus outbreak in Wuhan.

Cantrill said Trump would use Biden’s “sympathetic approach” toward China against him going into the general election.

“One of the most bipartisan issues right now on Capitol Hill over the last few years has been sort of suspicion and skepticism around China,” she said. “The Democrats have a different kind of approach towards that skepticism but it results in the same outcome.”

In a recent poll, Americans reported bipartisan distrust of the Chinese government’s handling of the outbreak of the CCP virus, commonly known as the novel coronavirus.

A Harris Poll survey conducted from March 14 to April 5 showed that 77 percent of Americans blame the CCP for the spread of the virus.

The belief was echoed across the political spectrum, as 67 percent of Democrats, 75 percent of independents, and 90 percent of Republicans think the Chinese regime is responsible for the pandemic.

Seventy-two percent of Americans also blame the Chinese government for inaccurately reporting the impact of the virus in China.

Cantrill said many voters underestimated Trump’s “sincerity” on his trade agenda before the 2016 election, but he came to the White House with this “incredibly strong and deep-seated” view that America had been “short-shrifted on trade since the mid-1980s.”

She predicted that after the health crisis, Trump might declare another trade war against China in September or October.

According to the Harris Poll, 84 percent of Republicans and 64 percent of Democrats believe Trump should “reimpose tough tariffs” on Chinese goods if Beijing fails to meet the purchasing targets set by the phase one trade agreement between the two countries.

“I did a trade deal with China, where China is supposed to be spending $250 billion in our country,” Trump said at a White House press briefing on April 14.

“Now, I want to see if China lives up to it. I know President Xi; I think he will live up to it. If he doesn’t live up to it, that will be OK, too, because we have very, very good alternatives.”

On April 14, a fundraising committee for Trump’s reelection campaign sent an email to supporters asking donations to “hold China accountable” for causing the pandemic.

“China has been lying and doing everything they can to cover up the spread of COVID-19 in their country,” the email stated. “It’s absolutely disgraceful and we can’t stand by and do nothing.”

“President Trump has always been tough on China, but he can’t hold them accountable on his own. That’s why he is calling on YOU to stand with him and hold China accountable for their lies and deceptions during the Coronavirus pandemic.”

Top American officials said that U.S. intelligence is looking into whether the high-level laboratory in Wuhan is the source of the virus. Trump also confirmed on April 15 that “a very thorough examination” has begun on the origins of the Wuhan virus.