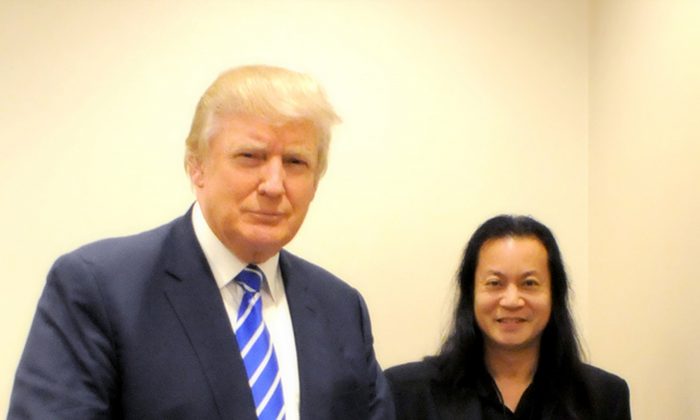 Ho was the photographer who covered the entire 2016 Trump presidential campaign. He recently published a book titled “Trumpography.”

“Yang is not an inspiration to the Americans who [have] Chinese descent. He should move to China. Andrew Yang should have a very excellent social credit score in China,” said Ho in a phone interview with The Epoch Times.

Ho called Yang a socialist and stated that Yang is a disappointment to Chinese Americans because “we Chinese living in America want less government, not more government.”

Ho and Yang are both first-generation Chinese Americans.

Yang, who formally filed last November to run in the 2020 presidential campaign, has proposed a socialist policy—a “Freedom Dividend” of $1,000 per month to all U.S. citizens over the age of 18.

Yang has also reportedly said that he wants to implement a digital social credit system, much like the one used in China.

China’s social credit system is a mass surveillance system that uses big data analysis technology to assign social credit scores to members of Chinese society, aiming to reward “good” behavior with benefits and punish “bad” behavior. It is a digitized form of its current system of paper records on individuals and households.

According to The Daily Caller, Yang claimed at his campaign rally in Washington, D.C., that he was the opposite of Trump, “an Asian man who likes math,” and said that his campaign would “make Americans think harder.”

Ho first met Trump in January 2015 at a Tea Party event. He remembers that Ben Carson and Ted Cruz were also there.

As someone originally from New York, Ho was enamored of Trump. He took pictures of Trump, sent them to Trump’s campaign after the event, and didn’t think anything more would happen.

However, almost a month later, Ho received a handwritten note with Trump’s signature, saying that he loved the pictures. Trump later asked Ho to work on his campaign rally in Myrtle Beach, South Carolina. It was a small event with only about 50 people.

Ho was very proud to tell The Epoch Times how he officially won his position in Trump’s 2016 campaign as a hardworking Chinese-American.

After the Myrtle Beach event, Ho learned there would be another event two days later in Charleston, which he was not invited to. But Ho took the initiative, woke up at 4 a.m., put on a suit, traveled four hours to the event, and then just showed up and started working.

Ho was officially hired after that, and he continued working until the last day of Trump’s 2016 campaign.

Ho laughed during the interview with The Epoch Times when he described how he got up 4 a.m. and put on the suit. Ho’s wife looked at him and asked, “Do you have a job?”

“We Chinese in America don’t want anything special. We just want the ability to work hard, and if we work hard, good things will happen,” Ho said.

He said he appreciates the freedom in the United States and despises socialism and communism, because he knows how destructive these ideologies are in practice.

‘Trump Is Not a Racist’

Ho said that Trump is completely different from how the media portray him, and he is very nice, cordial, and respectful.

“When he met my son, he praised my son: ‘So beautiful, so beautiful,’” Ho said.

Ho, who grew up in New York as a minority, suffered many experiences of prejudice in his early years, especially in the 1970s.

“I am very sensitive to people who are racist and prejudiced, because I had those for all my life,” said Ho.

“Donald Trump is not a racist by any shape of means,” Ho said in a firm tone.

Ho, as a professional photographer and small business owner, has worked with many celebrities in his life. Sometimes he admired them very much until he actually met them and found out that they were “absolutely jerks.”

But he said Trump “is a very nice person,” although Trump is sometimes a tough boss because he expects things to get done fast.

“He eats at McDonald’s, and he likes his Diet Coke,” he said.

Ho views Trump as a hardworking person just like himself. Ho said Trump worked long hours every day, but he has never seen Trump get exhausted like a normal person would.

“We Chinese in America, we work hard. Chinese people are not lazy people; that’s why I like Trump,” Ho said.

“We don’t want money to be distributed to us,” he said. “We are not socialist. We move away from that.”

“If [Yang] wants that, he can move to China,” he said. “We want freedom of religion; we don’t want [a] social credit score.”

In his new book, Ho shared many Trump photos and stories that were never known before by the public.

He stated in his book, “I was grateful for the opportunity to share my eye.”

The book’s full title is “Trumpography: How Biblical Principles Paved the Way to the American Presidency.”

Its back cover states: “In this book, I cover twelve individuals from Bible history. Their stories were merged with threads of the principles I witnessed at work on the campaign trail. … These are the principles that powered Donald J. Trump to become the President of the United States of America.”