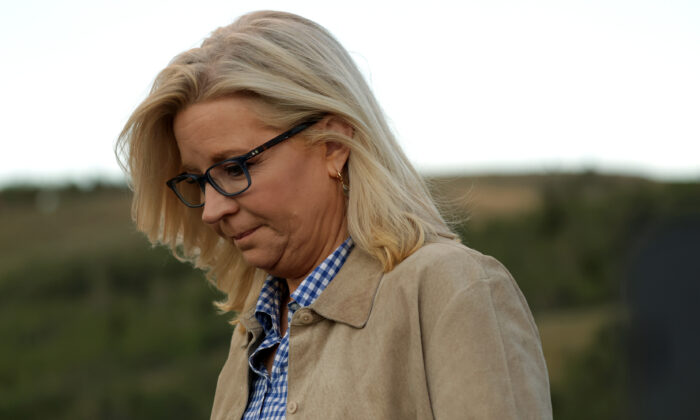 The Washington establishment—both Republican and Democratic—shuns former President Donald Trump because he was an “outsider” who disrupted rules in Washington, according to Rep. Troy Nehls (R-Texas).

Part of that establishment is the Congress, a “country club” that in Nehls’ terms includes many individuals who “wanted to determine who can come in” and be part of it. One example, he said, is Rep. Liz Cheney (R-Wyo.), who rose to become one of Trump’s fiercest Republican critics.

“He made the country club about the American people. That’s the difference,” he said. “I believe he changed politics in Washington forever.”

The congressman, a staunch Trump ally, called the change “refreshing,” and believes that many Americans are appreciative of this. But Trump’s moves had also upset Cheney and other establishment figures, he said.

“She, her family and extended family, and some of their very close personal friends don’t like guys like Donald Trump, because he came to Washington, and he shook it up,” said Nehls.

After serving three terms in Wyoming’s lone House seat, Cheney lost her re-election bid by 37 points to Trump-backed primary challenger Harriet Hageman, an outcome that Nehls, and many inside the GOP, saw as a repudiation of her sustained campaign against Trump.

Ten Republicans voted to impeach Trump last year. Since then, eight of them, Cheney included, are either due to retire or have suffered a defeat by party rivals endorsed by the former president—“a telltale sign that Donald Trump is well loved, well respected and well received in the Republican Party, with the conservatives, and they want him back,” said Nehls.

Cheney’s fallout with Trump over the 2020 election has resulted in heavy blowback from the Republican Party. Once the number three GOP leader in the House, she lost the post last May. The Republican National Committee in her home state twice voted to censure her, in February last year and this year, over her impeachment vote and her role in the House committee probe into the Jan. 6 Capitol breach, respectively.

In her concession speech on Aug. 17, Cheney invoked the courage of presidents Abraham Lincoln and Ulysses Grant, and said she would continue the Jan. 6 committee work and do “whatever it takes to keep Donald Trump out of the Oval Office.”

“This primary election is over,” she told her supporters. “But now the real work begins.”

She has transformed her campaign operation into a leadership political action committee called “The Great Task,” with the goal of preventing a Trump comeback, and teased a possible presidential run in 2024.

“Do you truly hate Donald Trump so much that you don’t care if the American people pay $4 for fuel? Give me a break, Liz,” he said, citing the fuel prices that are now a quarter higher than a year ago.

He suggested that Trump “may have said some things to offend the Cheney family” or their close allies that Liz Cheney “took pretty personally.”

“I think it’s personal with her,” he told The Epoch Times on Aug. 5. “President Trump insulted the Bush administration that her father served in. he said something derogatory, or what could be termed derogatory about her father, and it seems almost personal, quite frankly.”

That was one day after Dick Cheney, vice president under President George W. Bush, used a one-minute campaign ad for his daughter to denounce Trump, saying that “in our nation’s 246-year history there has never been an individual who is a greater threat to our Republic than Donald Trump,” a message that Liz Cheney said she “approved.”

Nehls said Cheney had made a “grave mistake” in taking on Trump, adding that she had “miscalculated the man’s support within America.”

Alignment With the Left

Despite Cheney billing herself as standing up for the republic’s foundational values, her cause has in reality aligned her with the left, Republican critics say.

Struggling at the polls months ahead of the primary, Cheney was asking Democrats to switch parties to vote for her. In what appeared to be a response, from January to Aug. 16, there was a 20 percent drop in Democratic voters in the state, paralleling a 10 percent jump in Republican voters. In a July survey, Cheney received a roughly 60 percent favorability rating with Democrats, compared with a dismal 13 percent from Republicans.

“The issue is that Rep. Cheney allowed her entire identity and political career to be completely redefined by her misguided vitriol for President Trump,” Rep. Ralph Norman (R-S.C.) told The Epoch Times.

“There were any number of more appropriate ways she could have chosen to help move our party forward towards 2024 and beyond. Instead, she chose to become a pawn in Democrats’ ongoing efforts to damage Republicans. And for that reason, Wyoming Republicans were right to send her packing,” he said.

What’s Next for GOP

Moving on from Cheney’s defeat in the Wyoming primary, which Trump said will allow her to “finally disappear into the depths of political oblivion,” the GOP’s focus is to win the House back, said Nehls.

“That is a must,” he said. Then, with the current House Minority Leader Kevin McCarthy (R-Calif.) as the Speaker, he said, the GOP “will make solid, sound decisions that will help change the direction in this country.”

Nehls attributed Trump’s appeal to the accomplishments under his administration, which include bringing America robust economic growth, enhanced border enforcement, job opportunities for minorities, and a toughened stance on China.