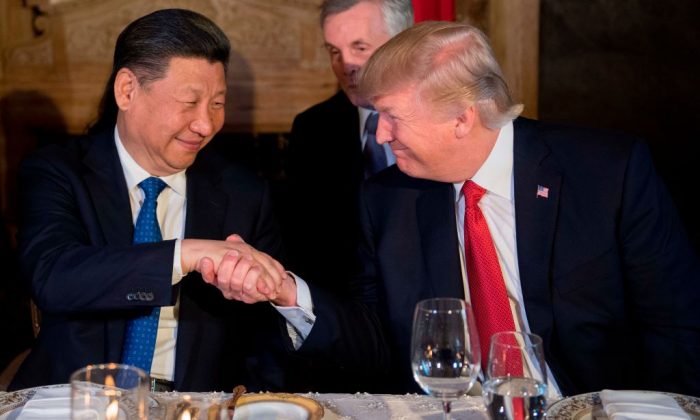 The strategy first used by President Donald Trump against North Korea is now being employed in the trade war against China and will bring far worse consequences for the Chinese economy than many expect, said an expert.

“Although he might not have said it, what President Trump is adopting during the trade war with China is an ‘extreme pressure’ strategy similar to that he imposed on North Korea,” said economic analyst Qin Peng.

According to Qin, Trump’s “extreme pressure” strategy imposed on North Korea included economic sanctions, upgraded preparations for military attack, forming alliances, and putting pressure on China to constrain North Korea. These tactics worked together to bring North Korea back to the negotiating table.

Trump also adopted “carrot and stick” tactics towards Europe, Canada, Japan, and other countries. Gradually, an international alliance has been formed, to force the Chinese Communist Party (CCP) to solve the problems of intellectual property theft and unfair trade.

Qin Peng said the “extreme pressure” strategy was a response to China’s attitude. Ever since the trade war began, China has been accusing, attacking and retaliating without making any of the positive changes Trump had expected.

China has also made a lot of bad judgments. For example, in the first round of talks, China proposed to buy $70 billion worth of American products and goods, but did not address the huge structural trade imbalance with the United States nor the accusations of technology theft.

“Deutsche Bank projects a 0.3 percent decrease of Chinese GDP if tariffs on $200 billion in goods are imposed, while Morgan Stanley is predicting a 0.3 percent direct impact and an indirect 0.3-0.5 percent impact,” Qin said. “However, I think these numbers are too conservative, as they don’t include the factors of market and investment confidence.”

Qin pointed out by way of example of the effect of positive confidence how the Dow-Jones index increased sharply as soon as Trump took office, before any of his promised tax or regulation cuts were in place. The opposite effect could now be seen with China.

“Other analysts project a GDP decrease as much as 3 percent if other factors such as foreign investment are considered,” Qin said. “I basically agree with this analysis. With the deepening of the trade war, China’s structural foreign currency surplus will disappear.”

Qin believes China’s massive credit bubble could burst. “History has told us that the damage caused by financial problems could be much larger than sheer weak GDP growth.”

According to a Bloomberg report on July 31, “The U.S. and China are trying to restart talks aimed at averting a full-blown trade war between the world’s two largest economies, two people familiar with the effort said.”

Wen Zhao, a commentator for NTD, part of the Epoch Media Group, thinks that Chinese leader Xi Jinping made three major misjudgments during the trade war, which are misjudgments about Trump, the international environment, and China itself.

According to Wen, China might have thought that Trump is only a businessman without strong principles, and could easily be influenced by short-term interest, including his interest in his family businesses. The CCP therefore adopted a strategy of delay and ignored Trump’s warnings and dissatisfaction.

The misjudgment about the international environment lies in the fact that China thought it could form a “united front” with Europe to fight against the United States by giving out some trade and investment deals. However, this was a serious misjudgment, as China seems to have forgotten what it has done within the EU in terms of trying to create factions with its “One Belt, One Road” initiative.

It asked for political endorsements from countries such as Greece and the Czech Republic, as an exchange for investment. All these doings wouldn’t go unnoticed by the European leaders. How would they be willing to trust Beijing?

What is more important is the misjudgment about China itself, as well as its ability to influence the international world. The recent propaganda campaigns such as CCTV’s “Amazing China” series, the “Made in China 2025” plan, the “One Belt, One Road” initiative, which Wen said involves China “throwing away” huge amounts of money, the military expansion, and so on have caused the world to begin to be on guard against the Communist regime.

In conclusion, Wen said “if you know neither yourself nor your opponent, then you will lose the war.”