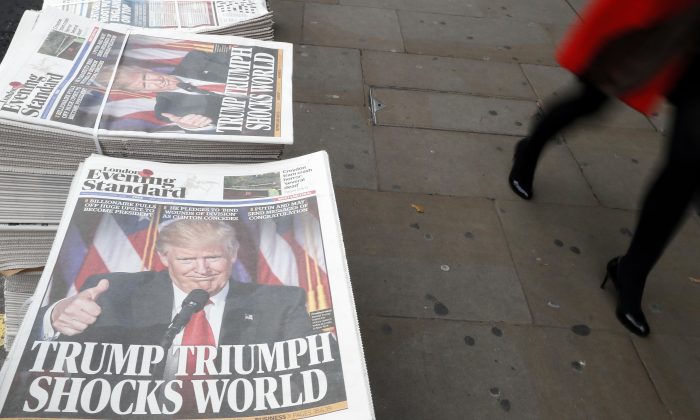 The morning after the election, journalists and talking heads were full of recrimination and wonder: How could they have gotten this election so wrong?

For weeks before, one expert after another reached the same conclusion, mutually reinforcing the conventional wisdom that while this would be a close election, Clinton was sure to triumph.

At 2:52 a.m., stat guru Nate Silver of the FiveThirtyEight website declared Donald Trump’s victory “the most shocking political development of [his] lifetime.”

By daybreak, Margaret Sullivan of the Washington Post blamed Trump’s rhetoric for causing journalists not to take him seriously: “[He] alienated us so much that we couldn’t see what was before our eyes.”

Jim Rutenberg of the New York Times acknowledged, “The news media by and large missed what was happening all around it.”

Rutenberg noted that CNN’s John King realized on election night that they had not been reading the electorate correctly: “We were not having a reality-based conversation” about what was showing up on the electoral map, he said.

On Fox News’ election night coverage, Tucker Carlson put his finger on what was happening: “It’s the entire world we live in. They [the elite] didn’t understand the country they presided over.”

Living in a Bubble

Indeed, Trump’s victory was such a surprise because the elites of this country have grown out of touch with the nation they live in.

In Charles Murray’s book “Coming Apart,” he describes the rise in America over the past 50 years of a new upper class that increasingly lives in a bubble.

This upper class, less than 5 percent of the nation as a whole, holds the positions that allow them to make the decisions about how the rest of America lives. They are CEOs and top executives, heads of nonprofits, top lawyers and judges, executives and editors who determine how the news will be covered, heads of TV networks and movie studios, top academics and scholars, heads of federal bureaucracies, and politicians.

Murray found that this privileged group has become a homogenous class. They have the same tastes and culture. They exist at the top of the income distribution. They go to the same schools, live in the same select zip codes, and marry one another.

The typical journalist at the leading news outlet may not make the same high incomes as the members of this class, but they clearly identify with its attitudes.

This class lives separate geographically, socially, and culturally from the rest of the country. To an increasing degree, they may not in their daily lives interact with members of the lower class, except perhaps for the Uber driver who picks them up or the nanny who cares for their children.

For those who live in the expensive neighborhoods of northwest Washington, D.C., times have never been better, as their wealth has effortlessly skyrocketed on the back of a soaring stock market. It is not surprising, then, that on Sunday morning news shows, members of the upper class would speak in a bored way about how free trade in the long run is best for everyone.

While the economic theory of free trade might be true over time for people all over the world, for the individuals living in Youngstown, Ohio, who have seen the factories that guaranteed them a middle-class life pack up and move away, this theory is irrelevant.

Similarly, construction workers in Colorado priced out of work by illegal immigrants see a federal government that has failed to protect them by enforcing the law. Instead, they see sanctuary cities, elected officials, journalists, and business interests making the case for ever more immigration.

What they and the factory workers in Youngstown see is an elite that doesn’t recognize their suffering, and, even worse, condescends to it.

These are the middle-class and working-class voters who turned out to deliver Trump the White House and shake the political establishment.

Trump has used the charge of corruption to explain the disconnect between the people of this country and its establishment.

Surely, there is corruption to point to. The revolving door between Congress and the lobbyists’ offices on K Street has never spun faster.

But the charge that “the system is rigged” goes beyond specific instances of malfeasance. It explains to ordinary people why the system is not working for them.

Journalists were shocked at the results of this election not because they are corrupt, but because they looked at events through the blinders of their class.

The journalists’ shock is an opportunity for the upper class to recognize they have such blinders and to look to heal the breach that has developed between them and the rest of the country. Murray is pessimistic about this. He sees a country with a culture that’s unraveling.

Shortly after his victory, Trump tweeted: “The forgotten man and woman will never be forgotten again. We will all come together as never before.”

If Trump is right, perhaps this election will be the beginning of a better understanding among classes that seem to be alienated from each other.