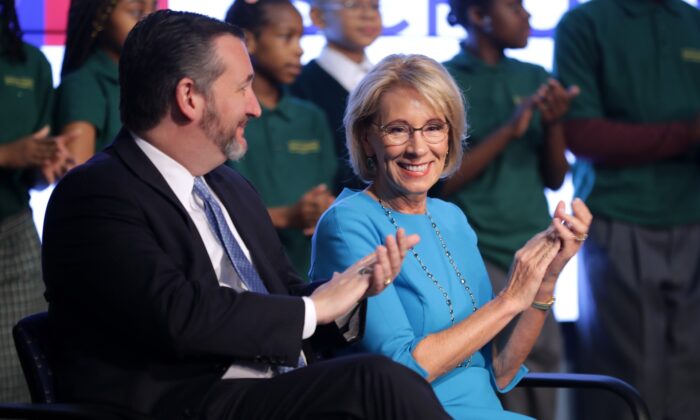 Education Secretary Betsy DeVos (R) and Sen. Ted Cruz (R-Texas) participate in an event about their proposal for Education Freedom Scholarships at the Education Department headquarters in Washington on Feb. 28, 2019. According to the department, the scholarships will be funded with $5 billion of federal tax credit for donations to scholarships for private schools and other educational programs and would "significantly expand education freedom for millions of students and families across the country." (Chip Somodevilla/Getty Images)
By Petr Svab

President Donald Trump has proposed an overhaul of federal education funding that would, in the administration’s view, deliver on his promises of returning decision-making power to states and districts, expanding school choice, and giving students more pathways to careers.

Trump’s take on education has been that Washington has usurped too much power over the classroom and needs to step back.

As the executive, however, he has limited room for doing so, as many of the federal regulations, such as requirements for standardized testing, academic standards, and intervention in struggling schools, are mandated by law.

Moreover, the federal government only pays about 7 percent of public education expenses.

Trump’s 2021 education budget proposal promises greater flexibility for states and localities on how to use the federal money. It would roll almost 30 federal K–12 programs into one block grant allocated to states largely based on numbers of low-income students. This should simplify the grant process for the states and, in the future, allow the Department of Education to reduce staffing, the administration said (pdf).

“States will be free to focus on people, not paperwork. Results, not regulations,” Education Secretary Betsy DeVos said in a Feb. 10 release.

The block grant would total less than $20 billion, a reduction of nearly $4.7 billion from the total appropriated this year to all the programs it would replace.

“President Trump’s budget proposal seeks to pay for the cost of his reckless tax cuts by raiding important investments that would improve the lives of people across the country,” he said in the release.

Trump’s proposal includes Education Freedom Scholarships (EFS), a program proposed by Sen. Ted Cruz (R-Texas) that would give up to $5 billion in federal tax credits dollar-for-dollar to taxpayers who donate to organizations that grant elementary and middle-school scholarships in their state.

Trump has been a fan of the school choice movement, which supports alternatives to standard public schools, such as charter schools, vouchers for private schools, and homeschooling. The administration expects EFS to attract $5 billion in donations that would help more than a million students “find their education fit.”

Each state would design its own rules for what the scholarships could pay for, including career and technical education, special education services, or private school tuition.

Some states already run similar programs, as Trump highlighted in his Feb. 4 State of the Union address.

“For too long, countless American children have been trapped in failing government schools,” he said. “To rescue these students, 18 states have created school choice in the form of Opportunity Scholarships. The programs are so popular that tens of thousands of students remain on a waiting list.”

Trump urged Congress to pass Cruz’s legislation, which has languished at the Senate’s Finance Committee since February 2019.

“Chairman Grassley is looking for more member support before determining next steps,” the spokesman, Taylor Foy, told The Epoch Times via email.

The bill currently has 14 cosponsors, all Republicans.

It’s not likely the bill will pass the Democrat-controlled House. Teachers unions, a major political power block for the Democrats, oppose school choice. The National Education Association, the largest teachers union, has argued that tax credit vouchers harm public schools because the fewer children go to public schools, the less money the schools receive from the government.

“Districts cannot reduce their fixed costs—maintenance, utilities, debt service, transportation, etc.—in proportion to the number of students who leave,” it stated in a policy brief (pdf), noting that “school districts must make do with less” in such situations, or the schools may close down.

While several previous administrations have mostly focused on increasing the share of Americans heading to college, Trump has put more emphasis on expanding vocational education, such as job training, apprenticeships, and career and technical education (CTE).

He proposes boosting federal CTE funding by $900 million to a total of around $2.1 billion. If approved, it would be the largest increase since at least 1980.

About a quarter of high schoolers earned at least two CTE credits in one field of study in the school year 2017–2018, according to the Education Department.

Based on data from previous years, such students have a lower chance than their peers of getting a bachelor’s degree or higher within eight years of graduation, but on the other hand, they have a higher high school graduation rate as well as higher earnings and a chance of earning at least an undergraduate certificate within eight years.

An increased CTE funding should help narrow the gap between the more than 6 million available jobs and the number of people qualified to fill them, easing shortages in the relatively tight labor market. The results, however, depend on how well the CTE programs connect with skill requirements of employers.