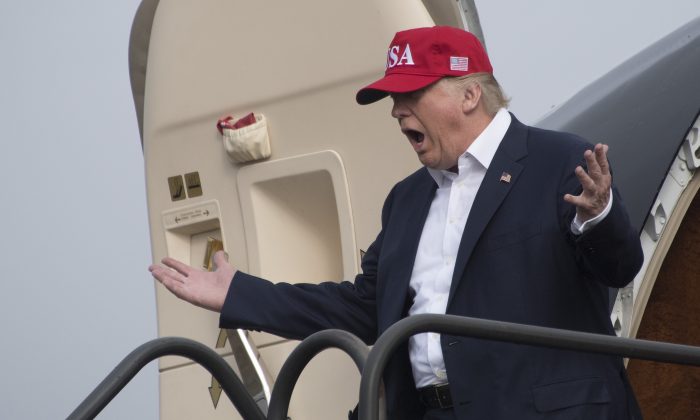 US President-elect Donald Trump reacts as he walks off his plane as members of the Azalea Trail Maids wait for his arrival in Mobile, Alabama, for a 'Thank You Tour 2016' rally on Dec. 17, 2016. (JIM WATSON/AFP/Getty Images)
Politics

A prominent media outlet’s exclusive story on Friday has gone after whether Donald Trump is really as tall as he says he is on his driver’s license.

According to a Politico, which obtained a copy of his New York state driver’s license, Trump is listed as 6’2″ and not 6’3″—as the president-elect and his doctor have said in public.

“Donald Trump and his doctor claim he’s 6-foot-3, but his New York driver’s license says he’s actually an inch shorter,” Politico reported Friday. “A copy of Trump’s license, obtained by Politico through an open-records request, lists the president-elect at 6-foot-2.”

The exclusive has drawn criticism from many on Twitter, who say Politico and the report’s writer are grasping at straws for a story on a slow-news day. “Really dude?” wrote one person to the author of the article on Twitter. Another chimed in: “It’s so terrible it should be considered fake news. Lol.”

It’s worth noting that a person’s height can fluctuate during the day, say several studies. According to one National Institute of Health (NIH) study, “It is well known that stature becomes less as the day progresses, but it is usually considered that gentle traction upwards on the head when measuring height will compensate for this effect.” It further noted that there’s “an average decrease in stature from 9.30 a.m. to 2 p.m. of only 2 mm in 19 boys, and from 10 a.m. to 5 p.m. of 4.6 mm in another group of 11 boys.”

An NIH study from 2005, titled “The transformation of spinal curvature into spinal deformity,” said “The effects of gravity on the upright human posture are powerful: Individuals are as much as 25 mm taller in the morning than in the evening, as a result of compressive forces bearing down all day, And astronauts ‘grow’ by nearly 75 mm when released from the force of the earth’s gravity.”

So, that could explain the lost inch shown on his license.

According to the leaked license photo, the president-elect’s driver’s license expires on June 14, 2020. He got his license on May 3, 2012.

His eyes are also listed as blue.