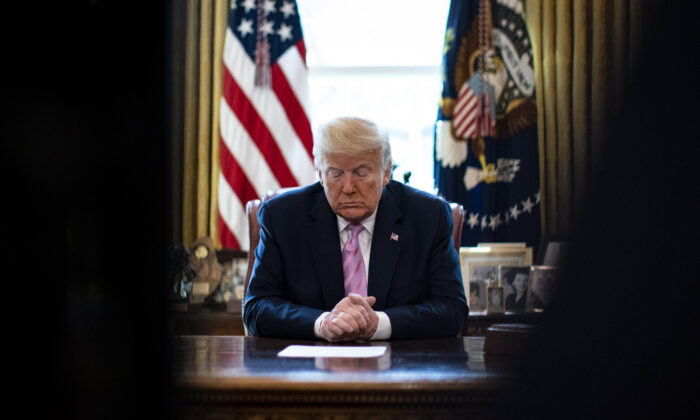 A friend and donor to President Donald Trump who the president had said was in a coma and seriously ill after becoming infected with the CCP virus has died.

Stanley I. Chera’s death on April 11 was reported by The Real Deal, which covers the New York real estate industry. The publication cited unidentified sources who have worked with Crown Acquisitions, the firm Chera founded and ran. Chera was in his late 70s.

A White House official on Sunday confirmed Chera’s identity and ties to the president. The official spoke on condition of anonymity to share details about Trump’s personal friendships.

Trump had spoken at recent White House briefings about a friend who had fallen ill with the CCP (Chinese Communist Party) virus, which has killed more than 20,600 Americans as of midday Sunday, according to Johns Hopkins University.

Trump first spoke about his friend on March 29 as he described the “viciousness” of the disease.

“I had a friend who went to a hospital the other day. He’s a little older, and he’s heavy, but he’s (a) tough person,” Trump said. “And he went to the hospital, and a day later, he’s in a coma … he’s not doing well.”

“The speed and the viciousness, especially if it gets the right person, it’s horrible. It’s really horrible,” he said.

The president, who is 73, alluded a day later to having friends who were ill.

“I have some friends that are unbelievably sick,” Trump said. “We thought they were going in for a mild stay. And, in one case, he’s unconscious—in a coma. And you say, ‘How did that happen?’”

Trump had left the impression that having personally known someone who became sick with COVID-19, the disease the CCP virus causes, had influenced his decisions about how to handle the outbreak.

But asked at a later briefing whether his friend’s case had marked a turning point in his thinking, Trump said it had not because he had been seeing the statistics and the rising case numbers.

“He’s sort of central casting for what we’re talking about, and it hit him very hard,” Trump said of Chera on April 1. “I’ve never seen anything like it.”

Trump called out his friend and campaign donor at a 2019 rally in Grand Rapids, Michigan, as “one of the biggest builders and real estate people in the world.”

“He’s a great guy, and he’s been with me from the beginning,” Trump said.

For most people, the CCP virus causes mild or moderate symptoms, such as fever and cough that clear up in two to three weeks. But it can cause more severe symptoms in some people, especially older adults and people with existing health conditions. The vast majority of people recover.

Trump has been tested at least twice for the CCP virus, with negative results each time, the White House said.