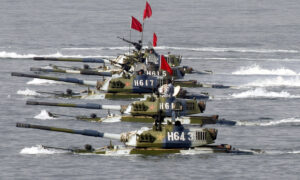 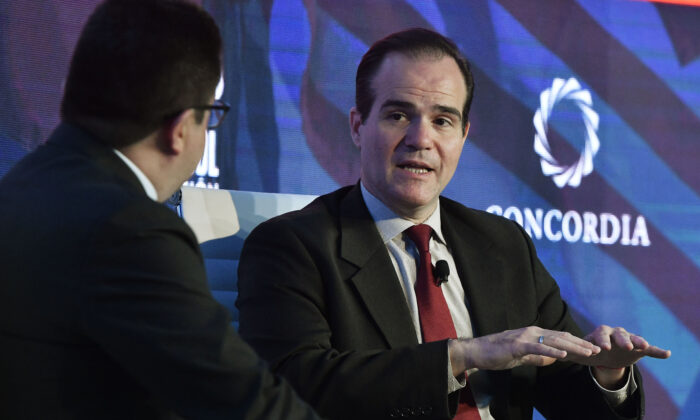 Mauricio Claver-Carone​ (R) attends the conversation 'Trump Administration Priorities in the Americas' at the 2019 Concordia Americas Summit in Bogota on May 14, 2019. (Gabriel Aponte/Getty Images for Concordia Summit)
Americas

Mauricio Claver-Carone, the current senior director for Western Hemisphere affairs at the U.S. National Security Council and an adviser to President Donald Trump, was elected Sept. 12 to be the next president of Latin America’s top development bank.

He was elected by the Inter-American Development Bank’s (IDB) board of governors and will begin a five-year term on Oct. 1, the IDB said in a statement. The IDB is a leading source of long-term financing for economic, social, and institutional development in Latin America and the Caribbean, loaning about $13 billion each year.

The Treasury Department nominated Claver-Carone for the position in June.

“The nomination of Mr. Claver-Carone demonstrates President Trump’s strong commitment to U.S. leadership in important regional institutions, and to advancing prosperity and security in the Western Hemisphere,” the department said in a statement on June 16.

O’Brien praised him for his “strategic vision for accelerating best-in-class private investment in the region,” while Pompeo said that Claver-Carone has been a visionary leader in advancing prosperity in the Western Hemisphere and a strong advocate for the democratic institutions and security cooperation that underpin economic growth and development.

“The United States looks forward to working closely with him during his tenure as president of this essential organization as it revitalizes economies throughout Latin America and the Caribbean,” he said.

The confirmation of Claver-Carone, a Cuban American, as IDB president is a major step forward of the Trump administration’s Western Hemisphere strategy of confronting the increasing influence from the Chinese regime in America’s neighborhood.

In the Western Hemisphere Strategic Framework (pdf) published by the Trump administration in August, the United States regards the region be “critical” to its national security, peace, and prosperity.

The National Security Council listed four strategic goals in the framework including securing the homeland through preventing illegal and uncontrolled human migration, smuggling, and trafficking, advancing economic growth and expanding free markets in the Americas, reaffirming the region’s commitment to democracy and the rule of law, countering economic aggression and malign political influence, and expanding and strengthening the regional community of like-minded partners.

“The Western Hemisphere is a geopolitical priority for the United States,” reads the framework.