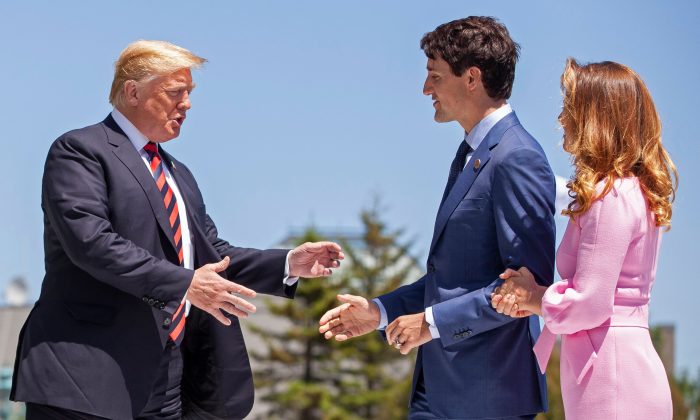 U.S. President Donald Trump is greeted by Canadian Prime Minister Justin Trudeau and his wife Sophie Gregoire Trudeau on the first day of the G7 Summit in La Malbaie, Quebec, Canada, June 8, 2018. Canada should welcome the U.S. offers for trade liberalization rather than double down on protectionism. (Geoff Robins/ AFP/Getty Images)
Viewpoints

Trump’s Demands Are for Canada’s Own Good

Canada, like the US, hasn't perfected free trade, but the nations could do so together

The “great white hope“ wants to liberate the Great White North, and he may be just the man who can make it happen.

“No tariffs, no barriers … and no subsidies,” President Donald Trump recently outlined with regard to Canada and the North American Free Trade Agreement (NAFTA). “That’s the way it should be.”

Many observers wrongly confuse Trump’s retaliatory tariffs with his objective, which is the elimination of all trade duties. His trade sanctions against Canada, although blunt and costly instruments, are conducted regrettably and in response to barriers and manipulation across the border.

Thus far, the Liberal Party government of Prime Minister Justin Trudeau, rather than engaging in introspection, has perpetuated this confusion with misleading rhetoric. While purporting to carry the banner of free trade, which is laughable, Trudeau has upped the stakes and imposed additional tariffs of his own.

Doubling down on trade mercantilism and protectionism in a tit for tat with Trump is the worst action Canada can take. As explained by Marco Navarro-Génie, president of the Atlantic Institute for Market Studies in Nova Scotia, Canada cannot win from retaliation, and a “push for unfettered trade should begin at home.”

Navarro-Génie points out that a whopping 75 percent of Canada’s exports go to the United States, with the European Union a distant second at 8 percent. Given that 16 percent of U.S. exports go to Canada—and 14 percent to Mexico—the neighbor to the north has far more to lose and can hardly afford to sustain a trade war.

Elephant in the Room

The United States has her share of trade shortcomings that merit attention, but the elephant in the room is Canada’s self-defeating array of trade barriers that Trump wants to do away with—not to mention the barriers to trade between Canadian provinces.

Try to do something as simple as bringing your automobile when you move to Canada. You will get a taste for the punitive taxes and useless bureaucracy that stand in your way.

This is where Trump is doing Canada a favor, by identifying her many barriers to economic dynamism. Trump’s first priority in trade negotiations, for example, is to dismantle Canada’s “supply management” of dairy, a racket that hides behind outrageous tariffs: 298 percent on butter, 270 percent on milk, and 245 percent on cheese.

A recent op-ed in the Chronicle Herald of Halifax, for example, laid waste to the touted benefits of agricultural supply management. The bottom line from James Moir, a businessman in Atlantic Canada, is that these various cartels, which extend to poultry, cost consumers dearly. The “Soviet-style economic regime” also blocks aspiring Canadian farmers from getting into the industry.

“No one in Canada can even get into these farming businesses unless [he buys] an existing quota first—from one of these farmers!” In other words, you have to buy a piece of the fixed pie from the cartel, and the cost per animal quota ranges from $19,200 in Ontario and Quebec to $32,600 in British Columbia.

The Fraser Institute has recently documented in detail how liberalization of supply management could benefit both farmers and consumers. The authors of the report offer Australia as a successful case study, and they explain that phasing out the program would remove pricey middlemen and enable greater experimentation and innovation.

Trump’s stance against supply management fits with his broader demands, which overwhelmingly favor free trade. Those that are ambiguous or lean against free trade are few and far between. He has even gone so far as to support the World Trade Organization as an arbiter between the nations (PDF, p.6).

A no-brainer and win-win, for example, is the elimination of barriers to U.S. investment in all sectors of the Canadian economy. Capital investment is a pivotal ingredient in a nation’s development, and while most nations are crying out for investment, Canada keeps her closest trading partner at arm’s length in many sectors.

Further, Trump has rightly identified the use of regulation to stop U.S. goods entering Canada, a strategy that often flies under the radar. He seeks regulatory cooperation to reduce these barriers, which include everything from French-language mandates for almost all packaging to quarantine measures, which delay items that hinge upon swift delivery.

The challenge on the Canadian side is the notorious special interests, their own version of the swamp, akin to the American Farm Bureau Federation. Just the sniff of a change in the air regarding supply management, for example, led Trudeau’s chief rival, Andrew Scheer of the Conservative Party, to release a statement describing any letup as “totally unacceptable.”

The Canadian equivalent of a RINO, Scheer beat classical-liberal Maxime Bernier for the Conservative Party leadership in 2017 on account of “dairy-lobby fake Conservatives,” as explained by Terence Corcoran of the National Post. Bernier’s outspoken opposition to supply management has even seen him lose his position in Scheer’s shadow cabinet.

Cronyism on the Conservative Party side, however, offers an opportunity for Trudeau, to forge a positive relationship with Trump and conduct overdue reforms in Canada. He can take the high road, cease with the costly trade war, and promote free trade, the oft-forgotten purpose of NAFTA. Trudeau could see Trump and raise his offer by meeting his demands and stipulating where the United States could better accommodate trade from Canada’s perspective.