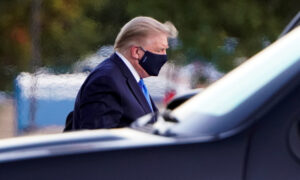 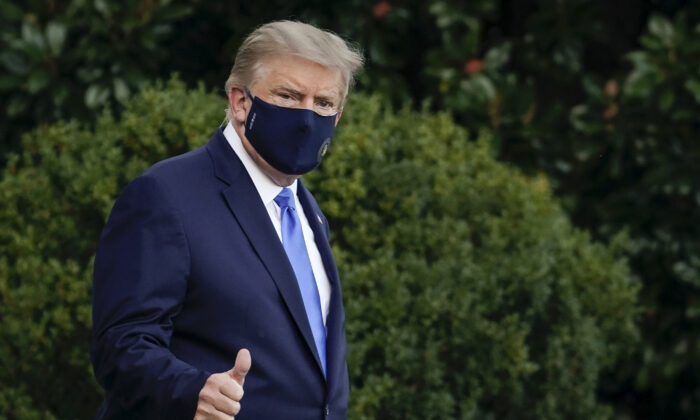 Within hours of the president’s 1 a.m. Friday tweet that he and the First Lady had tested positive for the CCP virus, CNN released an article coldly reporting that Trump’s age (74), and other compounding factors, put the president at grave risk.

However, Trump’s resilience and energy levels are legendary. The man seems to never stop, and, to my knowledge, has had no (other) serious health issues. Later Friday morning, the president checked in to the Walter Reed Military Hospital where he received or continued various therapies, including the experimental drug Remdesivir. Though we now know the president did receive some supplemental oxygen for a brief period before leaving for Walter Reed, the president released a short video before boarding Marine One showing him in a suit and tie, appearing not be in distress and talking normally without labored breathing.

The latest CDC data estimates a 94.6 percent survival rate for the over 70 age bracket. The president of course is receiving the absolute best medical care, and his lead doctor, Sean Conley, on Friday, said he’s “doing very well” and is having no difficulty breathing.

Given the latest CDC statistics, Trump’s lack of other serious health issues and general good health, his formidable personal constitution, and the level of care he’s receiving and his favorable response to therapies thus far, it seems a safe bet the president will recover.

Assuming the president does recover, that will place him in the position of having antibodies to the virus, making his contrast to the frail 77-year-old Joe Biden even more stark.

The president will be seen as invincible, as having defeated 16 GOP nominees, including the youngest member of the Bush Dynasty, Jeb Bush; former FBI Director James Comey, former CIA Director John Brennan, and the Deep State; special counsel Robert Mueller and his team; and House Speaker Nancy Pelosi (D-Calif.) and Rep. Adam Schiff (D-Calif.) and their failed impeachment effort; and, once he has recovered, COVID-19, a dreaded disease, as well.

Picture his return from Walter Reed to the White House, which could be as early as Monday, the president holding up a clenched fist or V for victory sign. His base will be energized like never before.

While the left will doubtless claim he was reckless in his social distancing and mask-wearing, that claim will ring hollow in comparison to Trump’s victory over COVID-19.

The president will surely contrast himself to Joe Biden, who has remained “safe” in his basement, claiming, yes, he got COVID-19—as have other leaders—because he’s a leader, and that leaders lead, and they can’t do so from a basement or bunker.

Following the president’s early Friday morning tweet that he and the First Lady had tested positive, the left went berserk. Some tweeted, “I hope Trump dies.” Others, “I hope Trump dies ASAP.” One person tweeted “I guess this means I have to hope harder Trump dies slowly and painfully.”

Even as Trump’s supporters were holding a prayer vigil outside Walter Reed, radicals from the left were dancing in the street, chanting for his death. One is on video saying “Wah, wah, your leader’s gonna die! I hope he dies!”

One of Trump’s weaknesses is that, as a flamboyant New York City billionaire with an ex-model wife, he’s not a very sympathetic figure. He can be abrasive.

The left, however, can’t control themselves now, in the face of his diagnosis, and their brutal responses will make Trump into a sympathetic figure for the first time in his presidency.

The mainstream media were no better. CNN almost immediately ran a story callously calling Trump “clinically obese” (not merely “overweight”), claiming his age, obesity, and other medical conditions increased the likelihood Trump would succumb to the CCP virus.

A couple of hours after the president’s early Friday morning tweet revealing his and the First Lady’s diagnosis, the Washington Post tweeted, “imagine what it will be like never to think about Trump again” referencing an opinion piece they were running. Washington Post editors later took down that vile tweet, explaining that it had been “written” before Trump revealed his diagnosis. So what? It was posted after. Did a leading newspaper not know about Trump’s earth-shattering diagnosis tweet when they posted that disgusting tweet?

At a Sunday morning presser with his doctors, who reported Trump was doing well with 98 percent oxygen saturation levels, reporters relentlessly pressed the doctors looking for any signs the president was experiencing complications. Did his oxygen saturation levels ever dip below 90 percent one reporter is heard pleading. Did medical imaging of the president’s lungs show early stages of pneumonia another plaintively asks. It’s clear these reporters are sorely disappointed the president is doing well and on the road to recovery. They’re desperate for bad news.

Tens of millions of Americans, including many moderate Democrats and Independents, will not tolerate this disgraceful, ugly behavior, the media’s double standards, and what the left calls “hate speech.” Because the liberal media is an adjunct to the Democratic Party, any voter wishing to distance him or herself from this vile behavior is left (no pun intended) with two choices—don’t vote or vote for Trump.

The potential impact of this trend on the election could be profound. President Trump—the media and public relations genius that he is—grasped this incipient trend immediately. In his first, brief public address before boarding Marine One for Walter Reed, Trump is wearing a purple-blue tie. I’ve known Trump since the 1980s and have never before seen him wear a purple tie. Purple is the color one gets when red and blue are mixed. I don’t think the purple tie was an accident; it was a message—Trump was reaching out across the political aisle.

In his Saturday evening address from Walter Reed, a tie-less Trump repeatedly said how “thankful” he was to all Americans, that he was grateful for the “bipartisan consensus of American people,” wishing him well, and that he “won’t forget it.” When mentioning the virus, the president referred to the “coronavirus, or whatever you want to call it,” not using the phrase “China virus” or “Wuhan virus.”

Trump’s attitudes on the origins of the virus or China have not changed. His phrasing was calculated to elicit bipartisan support. He’s now going after moderate Democrats and Independents, recognizing that his diagnosis has radically altered the election landscape in ways now making that a real possibility.

Tenor of Future Debates Will Be Far More Favorable for Trump

Whatever your views on who won the first debate, most people agree that Fox News’ Chris Wallace did an awful job, and appeared highly partisan and combative, inserting himself as a principal in the debate. Trump ended up debating two people—Biden and Wallace.

Trump’s campaign adviser, David Bossie, has said, since the president’s diagnosis, that the debates will go on, though he added the second debate may have to be postponed a few days.

Can you see the moderator at the next debate combatively demanding that Trump “do it sir” after he has already said he condemns white supremacy? Can you see Joe Biden calling him a “clown” or saying “shut up man”? I can’t.

Both Biden and moderator will have to be more respectful and civil at the next debate. The whole tone will be much less combative; I see this benefitting the president. Biden is running on a non-platform with no policy prescriptions other than pure Trump hatred; it will be very difficult for Biden to display his animus toward Trump after the diagnosis, and that’s all he has to offer.

Each candidate always proclaims victory after a debate. But only Trump will be able to say he beat Joe Biden and the virus at the same time.

Polling data shows that despite the pandemic, George Floyd riots, and climate change, no issue is more important to the voters than the economy. Even before his COVID-19 diagnosis, Trump rightfully polled better than Biden on the economy.

On Friday, stock futures tanked on the news that Trump tested positive.

This shows that investors were rattled at the increased possibility that Biden could prevail in the election.

A stock market sell off, followed by a rally as Trump recovers, if that happens, will end up drawing a bright highlighter through Trump’s enhanced ability to lead us through V-shaped economic recovery following the pandemic, as has already been happening. This will give Trump a big boost.

Democratic New York Sen. Charles Schumer was quick to demand a delay in Judge Amy Coney Barrett’s confirmation hearings, based on her supposed exposure to the virus at the White House event honoring her nomination on Sept. 26. We have all been exposed to the virus. Either Judge Barrett has tested positive or she has not.

Schumer’s effort to block the nomination will be seen by voters for what it is: an opportunistic attempt to take political advantage of the president’s diagnosis. As with Biden’s bunker mentality, Trump will be able to paint Democrats with their inability to function in the face of the virus. At this juncture, most Americans favor a restarting of the economy and a functioning government. Schumer’s calls to derail constitutionally compelled hearings, will likewise drive moderates toward Trump.

MSNBC’s Joy Reid suggested that the president faked his COVID-19 infection to get out of future debates.  This is preposterous and plainly untrue. The president’s entire medical team has confirmed his diagnosis, and explained the treatments he’s getting, including the experimental antiviral drug Remdesivir. All these physicians and others would have to be “in on it.” And of course, there was no obvious political advantage at the outset to such a hoax, and plenty of potential downside.

On the right, some have theorized that the president, First Lady, and so many of the president’s inner circle getting infected with COVID-19 just prior to the election and right before the Barrett confirmation hearings could only have happened intentionally—that someone who knows they were infected intentionally exposed the president and those in his orbit, perhaps at the Rose Garden event for Judge Barrett. While this theory is plausible, I’m aware of no proof of it, and it’s also plausible that there was no foul play. The CCP virus, after all, is highly contagious.

Regardless, both theories tend to push voters toward Trump and away from Biden. The hoax theory is so obviously wrong and outrageous that moderates will want to distance themselves from it and the whacky folks who believe it. Those who believe the deliberate-plot theory—or see it as a possibility—likewise will be pushed toward Trump and away from Biden.

In sum, the complexion of the race has been radically altered in Trump’s favor, and it will likely remain so until election day. Trump’s base has been enormously re-energized. The enthusiasm gap between Trump and Biden has widened. Trump will be seen as a sympathetic figure for the first time in his presidency, and the left and mainstream media will be seen as hateful and despicable radicals always ready to take a “no holds barred” approach to achieve their ends.

Once recovered from the virus, Trump will appear invincible, and will readily be able to distinguish himself from “basement Biden.” He will be able to claim the markets see him as essential to a V-shaped economic recovery. The debates will have an entirely softer tone, with the moderator and Biden less able to attack Trump, who will be seen as defeating the virus and Biden at the same time.