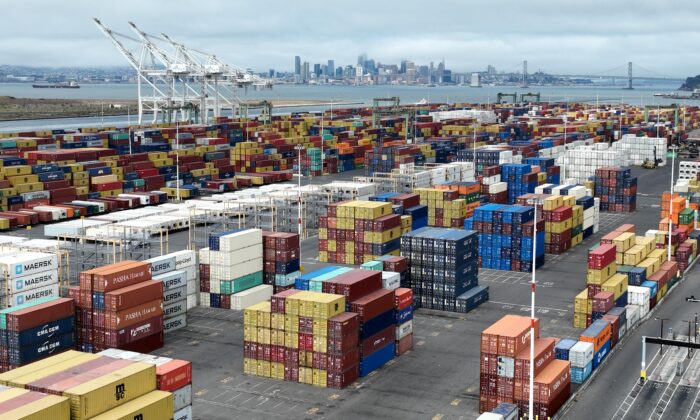 Tariffs that had been placed on Chinese imports by President Donald Trump have pulled in more than $150 billion over the past 50 months, according to data from Customs and Border Protection.

Trump imposed the tariffs in 2018 and 2019 on $350 billion worth of imports, in retaliation for China’s abusive trade practices, which included throttling American companies’ access to Chinese markets, forced technology transfer, theft of U.S. intellectual property, and currency manipulation.

The tariffs somewhat depress demand for Chinese goods by making them more expensive. Some of the burden is also borne by the sellers, who are forced to reduce prices.

China responded by imposing tariffs on U.S. goods, which seemed to depress U.S.–China exports in 2019. Exports bounced back in 2020 and increased an additional 20 percent last year.

Aside from those aimed specifically at China, Trump also imposed tariffs on imports of solar panels, washing machines, steel, and aluminum. Those have brought in more than $17 billion so far.

The Biden administration has continued the tariffs, although Treasury Secretary Janet Yellen has suggested lifting them to alleviate price inflation. Inflation has been running at a nearly four-decade high after unprecedented government spending during the COVID-19 pandemic. The price increases are mainly driven by energy and food—goods not particularly affected by the tariffs.

Plans to lift the tariffs were pushed aside by the administration after the Chinese Communist Party (CCP) escalated its aggressive stance toward Taiwan when House Speaker Nancy Pelosi visited the island nation in early August, unnamed sources told Reuters.

White House spokeswoman Saloni Sharma said that “nothing has been shelved or put on hold.”

“The president is weighing his options,” she said. “He is very cautious. He wants to make sure that we don’t do anything which would hurt American labor and American workers.”

Trump used the tariffs as leverage to push for a trade deal with China and got as far as signing phase one of the deal in January 2020. Later that year, however, he shelved the negotiations after the CCP’s cover-up of the initial COVID-19 outbreak in the central Chinese city of Wuhan contributed to the disease quickly spreading around the world.

China didn’t hold its end of the phase one deal, according to a July paper by the Peterson Institute for International Economics. The CCP has blamed the pandemic.