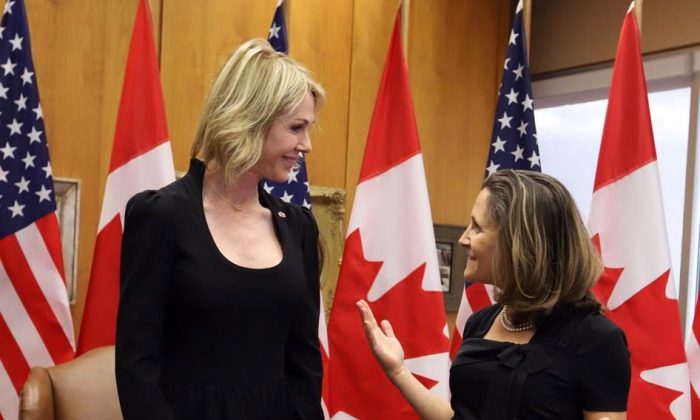 Trump told a freewheeling press conference on Sept. 26 that the Americans don’t like Canada’s trade representative “very much,” a comment that appeared directed at Freeland, the political leader of the Canadian team renegotiating the North American Free Trade Agreement.

The president’s personalized attack uncorked debate on Sept. 28 about whether Freeland brought Trump’s wrath upon herself during 13 months of delicate NAFTA talks—with her Washington speech in June and other recent appearances in which she criticized the administration’s “America First” foreign policy.

Freeland has met regularly over the last month with U.S. Trade Representative Robert Lighthizer at his Washington headquarters for closed−door talks. Senior political advisers have joined them at the bargaining table, including top staffers in the Prime Minister’s Office, Trump’s son−in−law and adviser Jared Kushner, and the countries’ ambassadors, Canada’s David MacNaughton and his U.S. counterpart, Kelly Craft.

On Sept. 27, Craft offered her view of the tone inside that room.

“Ambassador Lighthizer and Minister Freeland have tremendous respect for one another. I have seen their relationship first hand over the past 10 months. And more so as they work through differences while keeping focused on the end result,” Craft told The Canadian Press.

“I also have tremendous respect for Minister Freeland. … She’s smart, articulate, and has been a good friend since my arrival in Ottawa.”

Craft is coming up on the end of her first year as the Canadian representative of one of the most unpopular U.S. presidents, at a time when the fate of the continent’s economy hangs in the balance.

The U.S. and Mexico are poised to present the text of their bilateral trade deal on Friday, as pressure mounts on Canada to join that pact. The U.S. Congress is pushing Canada to join the U.S.−Mexico pact by a self−imposed deadline of Sept. 30 to allow Mexico’s current government to sign the deal before it leaves office on Dec. 1.

Cecilia Malmstrom, the European Union trade minister, also praised Freeland’s negotiating style on Sept. 27 at an event in Montreal, where she marked the first anniversary of the Canada−EU trade deal, known as CETA.

“We got to know them as very tough but fair, well−informed, engaged, very professional negotiators. And I am convinced that they have the same approach to those [NAFTA] negotiations.”

MacNaughton for his part said that he was feeling less optimistic about reaching a deal on NAFTA than he was before Trump’s comments.

“I think yesterday I would have said the glass was half−full and today I’d say the glass is half−empty,” MacNaughton said during a speech at the Global Business Forum in Banff, Alta.

“That kind of rhetoric doesn’t make it easier for us to compromise. But, you know, as I said yesterday, [Trump] doesn’t call me for advice very often.”

MacNaughton added that Trump’s Sept. 30 deadline for Canada to join the U.S.−Mexico deal does not mean Canada should “sign up for things we don’t agree with.”

Prime Minister Justin Trudeau gave credit on Sept. 27 to his NAFTA negotiating team, and suggested the American side shouldn’t be surprised by the tone of the talks.

“The Americans are finding that the negotiations are tough because Canadians are tough negotiators, as we should be,” he told reporters in Ottawa.

Trudeau also contradicted Trump’s account, from the same Sept. 26 press conference, that he rejected a request from the prime minister for a meeting to discuss NAFTA while they were in New York this week for the United Nations General Assembly.

“No, we didn’t ask for a meeting this time around,” Trudeau said.

There was disagreement over whether Canada was making it harder on itself because of Trump’s personal disdain for Trudeau and Freeland.

Trump was publicly angered by comments Trudeau made at his closing G7 press conference in June, and has likely been offended by Freeland’s recent speechifying that has defended the international institutions the U.S. president is regularly accused of undermining, said Cyndee Todgham Cherniak, an international trade lawyer.

“She has made negative comments towards the U.S. administration, which [Trump] takes to be him. I think he’s got a hate on for Canada right now,” said Cherniak, who is on Canada’s roster for settling disputes under NAFTA’s Chapter 19—one of the unresolved sections of the current Canada−U.S. talks.

But any assessment Trump is closely following Freeland’s utterances is overblown, said Bessma Momani, an international affairs professor at the University of Waterloo and Balsillie School of International Affairs.

“If Fox News didn’t cover it, he didn’t hear it. That’s the end of it. I don’t think he’s got the bandwidth to listen to what Canada’s foreign minister has been saying about him in different places.”