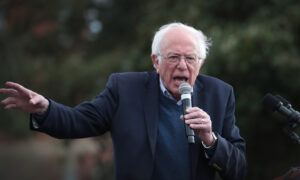 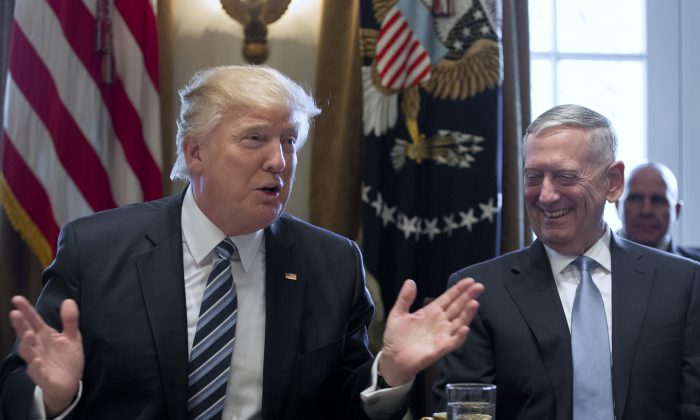 President Donald Trump (L) speaks beside Secretary of Defense James Mattis (R) during a meeting with members of his cabinet in the Cabinet Room of the White House in Washington on March 13, 2017. This was the first official meeting of Trump's cabinet. (Michael Reynolds-Pool/Getty Images)
Opinion

For decades, Republicans have attempted to cut federal funding for NPR and PBS, or have tried to defund them entirely, with little success.

But in the latest attempt, President Donald Trump’s budget seeks to defund the Corporation for Public Broadcasting (CFB), which was founded in 1967 and receives $445 million in federal funds. It only marginally supports NPR and PBS, and a majority of the funds goes to smaller, individual stations.

Both Republicans and Democrats have turned defunding the CFB into political theater even though it doesn’t contribute much to NPR or PBS, which both depend much more heavily on corporate sponsors and other forms of funding.

The GOP has long accused NPR, and to a lesser extent PBS, of having a left-leaning, or “liberal,” bias. For them, it’s also become a rallying cry against big government’s spending on wasteful programs.

Democrats and left-leaning media outlets have used Republicans’ efforts against them, describing them as heartless for trying to “fire Big Bird.”

Defunding NPR and PBS became a focal point during the 2012 election when then-Republican candidate Mitt Romney said during a debate: “I’m going to the stop the subsidy to PBS. I’m going to stop other things. I like PBS. I love Big Bird.” Romney’s comments became a trending hashtag on Twitter, with people coming out in defense of “Sesame Street.”

In fact, NPR relies on only 1 percent of the CPB for its revenue, while PBS depends on it for less than 7 percent, according to 2014 data published by The Washington Post.

Presidents Ronald Reagan and Richard Nixon have previously gone after subsidies during their administrations, and former President George W. Bush tried to cut funds to public broadcasting while in office.

Does Funding Influence the Results of Science?

But all Republican attempts to cut funds to public broadcasting have fallen flat. The last attempt was in January of this year, when Rep. Doug Lamborn again filed a bill that would strip funding.

If Trump’s budget proposal is passed, it could spell doom for dozens of public television stations. According to a 2012 CPB-commissioned study, when Romney proposed slashing the program, 54 public television stations were at risk of being shut off if they were stripped of federal funding. Another 76 public radio stations could have met the same fate. The majority of the public stations are located in remote, rural areas, the study found.

In responding to Trump’s budget plan, CPB issued a statement. “The federal investment in public media is vital seed money, especially for stations located in rural America and those serving underserved populations where the appropriation counts for 40 percent to 50 percent of their budget,” the statement said.

However, The Washington Free Beacon reported that defunding NPR and public radio would likely take years as the Corporation for Public Broadcasting gets its funding two years ahead of time.

Trump’s budget also seeks to eliminate the budgets for both national endowments, or about $296 million, as well as $230 million for the Institute of Museum and Library Services—but that’s another story altogether. The National Gallery of Art and the Smithsonian Institution will also be impacted.