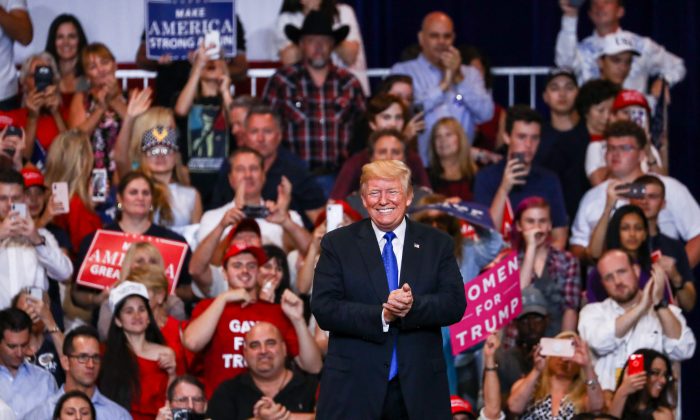 I wrote an article in late December 2017 about President Donald Trump’s consequential and positive first year in office. The list of his successes was, and still is, impressive.

Our leftist media describes the Trump presidency as tumultuous—a construct they have manufactured, one that doesn’t exist. Investigative journalist Bob Woodward’s new book, “Fear: Trump in the White House,” is a perfect example.

In his recent interviews, Woodward has described the Trump White House as fractious, out of control, and flailing. It is the preferred narrative of the left, the Democratic Party, and its vanguard, the mainstream media.

These narratives about Trump center around a fictional person in the White House, a fiction concocted by the left: He colluded with Russia to win. He’s an incompetent boob who tweets too much while the country is going to hell. He had nothing to do with the recent economic success. His tweets are too mean. And of course, he’s racist, hates women, and is Hitler.

None of the latter has any truth to it. These narratives, especially those from Woodward, are seriously laughable.

John Solomon of The Hill, an actual reporter who went to the White House earlier this month and interviewed Trump (unlike Woodward), said the following: The president couldn’t be calmer, the White House organization is fully functional, and the president was extraordinarily measured and detailed about anything he was asked. Solomon simply cuts the heart out of Woodward’s screed.

There is no White House in chaos.

Truthfully, the success of the Trump presidency is rolling on. In spite of our media-reported deceit, the economic miracle continues unabated. Every indicator shows economic strength seen only a few times in our history. Consumer confidence, business confidence, and overall contentment about the economy is sky-high. The stock markets have been on a tear, as have wage growth, manufacturing, and job growth for everyone who cares to work—all the result of Trump’s policies.

Similarly, Trump’s foreign policy has been masterful. North Korea came to the negotiating table; no more missile tests. Kim appears to have become a serious player in a historical time. The latest information about North Korea is overwhelmingly positive. We haven’t seen the likes of this since the Berlin Wall was torn down.

Trump pulled the United States out of the disastrous Iranian deal, and it’s likely the mullahs there will lose much, if not all of their power over time. He has literally destroyed the ISIS terrorist group. The Middle East has become quiet.

We are respected once again. Russia is backpedaling as we become top dog in the world again. China is trying to figure out how to not be taken to the cleaners by him. Its future goal of world dominion is in peril.

There is no more leading from behind, which was the unmitigated disaster of Barack Obama, Hillary Clinton, and John Kerry. Trump has shown a surprising side, the one of foreign-policy genius. Trade deals are one by one being renegotiated to the betterment of the United States. NATO members are beginning to pay their fair share. The mockery of the U.N. dictators and the organization’s snubbing of us is beginning to end.

Another quiet success: A record of outstanding lower court appointments continues. Trump is remaking the judiciary. The irony is, he may succeed in actually making our judiciary great again. His positive stamp is assured, and he’s not even two years in.

When we get through the Kavanaugh nonsense, Trump will have appointed two great justices to shape the Supreme Court for a generation. It’s likely that he will get at least one more appointment before 2020. Who knows, he may have more positive Supreme Court appointments than any president in the past century before he is done.

The left hates him for all this winning. He is literally undoing their power base. Likewise, the #NeverTrumpers—Bill Kristol, George Will, Jonah Goldberg, and the rest—have become irrelevant. What contemptuous fools they have shown themselves to be.

His latest success: The current takedown of the so-called “deep state.” I know, I know, what takedown you ask? There have been no indictments, no frog marches, no one is in jail.

Or Hillary Clinton, for that matter

Robert Mueller has failed. He has nothing. Even Woodward admitted that. One thing is clear, this cabal will lose the thing they cherish the most: their credibility. On that front, it is clear: Trump is winning; he has won this battle.

Watching recent interviews with former Trump campaign foreign policy adviser Carter Page, it’s hard to not see these conspirators being destroyed financially. As Fox News host Tucker Carlson has said, he is looking forward to Page being a very rich man. Page will break them all. His lawsuits are going to be epic. All of their ill-gotten gains: Poof! Gone in a heartbeat. It will be schadenfreude on steroids.

Let me finish with Trump’s recent interview with John Solomon of The Hill. The president says his crowning achievement could be exposing this corrupt FBI probe. That’s a serious mouthful. His presidency is filled with achievements, and here he is saying the deep state takedown may be his finest accomplishment.

Most on the center-right have learned to listen when he announces something like this. His track record of significant announcements is epic—from the economic miracle, to Korea, to his announcement about “wiretapping.” When Trump says something this stunning, it is an announcement that is big.

He knows he has won; he knows this all just has to be played out. How serious was this conspiracy? Very serious. It is perhaps the worst and most egregious plot by our own government officials ever. An attempt to illegally take out a presidential candidate by the deep state appointees of a former president? Unprecedented. Even worse, the continued attempt to remove him from the presidency on specious grounds is more than unprecedented; it was, and is, truly evil.

As writer Brian Cates has said, Trump has known about all of this for an extremely long time. He has known the players, their roles, and just how illegal and seditious their actions were. That he is declaring this as perhaps the most important work of his presidency is something we need to stand up and take note of.

The swamp is draining. Nope, no indictments yet. But the perps who ran this have been dashed on the shoals. They may not know it, they may fight it, but they are going to be destroyed, reputation-wise and financially.

And let’s hope legally, because they all deserve prison for what they did.

One last thing: He really has won. This pressure to declassify the FISA documents is likely only the beginning. I hope it ends in prosecutions, but one thing is for sure: they all will be ruined, one by one.

So forget the media narratives. Trump isn’t an ineffectual boob caught in a maelstrom of his own making. As conservatives, like all Americans, we haven’t had it this good since Reagan. Heck, we may never have had it this good. In spite of the media spin, the left is in full retreat, and will be for at least the remainder of his presidency.

David Prentice is a writer and novelist from the Midwest.  His articles have appeared in the American Thinker.