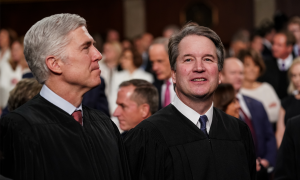 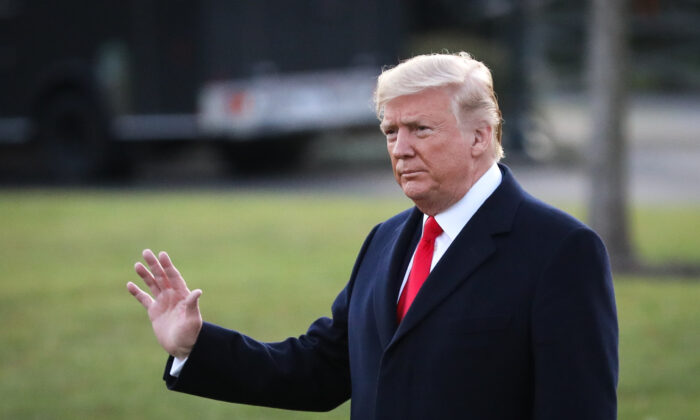 President Donald Trump’s attorneys urged the Supreme Court to block several subpoenas that would give the House and a New York investigation access to the president’s financial records in significant cases dealing with separation of power and absolute immunity concerns that will be heard later this year.

The president’s legal team filed briefs on Monday in three cases, arguing that three House committees and a Manhattan prosecutor should not be able to subpoena his accounting firm, Mazars USA, and two banks—Deutsche Bank AG and Capital One Financial Corp.—compelling them to release the tax and financial documents.

Three cases relating to Trump’s financial records reached the Supreme Court after appellate judges upheld the subpoenas. Two of the cases stem from subpoenas that were issued earlier in the year by three House committees—Financial Services, Intelligence, and Oversight—as part of their probes over allegations of the president’s dealings. Meanwhile, the third case deals with a criminal investigation in Manhattan.

Trump has asked the Supreme Court to reverse the lower courts’ decisions in all three cases. In December, the Supreme Court agreed to take up the cases, consolidating the two House-related cases while ordering oral arguments for the cases to be scheduled sometime in March (pdf).

The subpoenas are unrelated to the Senate impeachment trial where Trump’s legal team has been presenting the defense case on the chamber’s floor. These cases could continue to cause concerns for the president as the 2020 presidential election ramps up later in the year.

In one of the briefs (pdf), the lawyers argued that although House committees are claiming that they are seeking the records for a legislative purpose, they are instead engaging in law enforcement.

“These Committees are not legislating; they are avowedly engaging in law enforcement. All of them—to one degree or another—have acknowledged that the purpose of the investigations is to determine whether the President engaged in wrongdoing,” the lawyers argued.

Relying on events leading up to the issuance of the subpoenas while citing public statements surrounding the House investigations, Trump’s lawyers assert that the committees are demanding the records in an effort to find out whether the president had broken the law.

In an interview last year, for example, Chairwoman of the Financial Services Committee Maxine Waters discussed the purpose of the House subpoenas with CNN.

“He refuses to turn over the tax returns, what does he have to hide? Has he been compromised in any way? Is there money laundering going on? There is enough that we know about him to have legitimate suspicion and we need to have documentation,” Waters told the news network.

The lawyers said it is of “serious concern” that the House is framing the subpoenas as having a legitimate legislative purpose when the investigations that the subpoenas were issued from were not routine.

“The attempt of the Financial Services and Intelligence Committees to obtain the private records of the President so they may broadly consider banking and money laundering legislation should be rejected,” the lawyers said. “These subpoenas are no more valid than would be demands for the President’s medical records so Congress may consider healthcare reform.”

The lawyers added that the subpoenas are “expansive, burdensome, and unfocused fishing expeditions” that raise constitutional issues while keeping the president from fulfilling the obligations in his office. They also argued that publicly releasing information about individuals “is a form of punishment.”

“Exposing private details about individuals is not a power Congress holds,” the lawyers argue. “Yet that has been the goal here from the start. It is difficult to imagine a more blatant effort to expose for the sake of exposure than misusing the President and his family as a congressional ‘case study.'”

Meanwhile, in the separate Manhattan investigation case, Trump’s attorneys argued in their brief (pdf) that the president is immune from requests to hand over his financial records to the criminal prosecutor while he is in office.

In that case, the subpoena was issued by District Attorney of New York County Cyrus Vance Jr., who is investigating hush money allegedly paid to two women during the 2016 presidential campaign—adult film actress Stormy Daniels and former Playboy model Karen McDougal. Trump has denied the affairs and any other wrongdoing.

The lawyers said, “the Constitution vests in the president—and in him alone—the Executive Power of the United States. It grants him unparalleled responsibilities to defend the nation, manage foreign and domestic affairs, and execute federal law. The President cannot effectively discharge those duties if any and every prosecutor in this country may target him with criminal process.”

They added that the only way to prosecute a sitting president as provided by the Constitution is through impeachment.

“Once he leaves office, the President may be subjected to criminal process—but not before then,” they said.

“A prosecutor crosses a constitutional line when, as here, he initiates compulsory criminal process upon the President as part of a grand jury proceeding that targets him,” the lawyers added.

The criminal process, the lawyers argued, will also distract the president from his responsibilities and burden him to act confidently while in office.

“It also stigmatizes the President in ways that will frustrate his ability to effectively represent the United States in both domestic and foreign affairs,” they added.